#TtW13 Presentation Preview: On the Political Origins of Digital Dualism 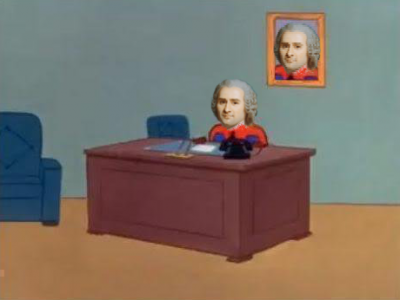 Just about every one of our contributing authors has written a piece that challenges or refutes the claims made by tech journalists, industry pundits, or fellow academics. Part of the problem is technological determinism- the notion that technology has a unidirectional impact on society. (i.e. Google makes us stupid, cell phones make us lonely.) Popular discussions of digital technologies take on a very particular flavor of technological determinism, wherein the author makes the claim that social activity on/in/through Friendster/New MySpace/ Google+/ Snapchat/ Bing is inherently separate from the physical world. Nathan Jurgenson has given a name to this fallacy: digital dualism. Ever since Nathan posted Digital dualism versus augmented reality I have been preoccupied with a singular question: where did this thinking come from? Its too pervasive and readily accepted as truth to be a trendy idea or even a generational divide. Every one of Cyborgology’s regular contributors (and some of our guest authors) hear digital dualist rhetoric coming from their students. The so-called “digital natives” lament their peers’ neglect of “the real world.” Digital dualism’s roots run deep and can be found at the very core of modern thought.  Indeed, digital dualism seems to predate the very technologies that it inaccurately portrays.

What evidence do we have that the beginnings of digital dualism has been with us for centuries? Obviously any evidence would not mention yet-to-be-invented artifacts, but it would mention relatively new technology. (I’ll defend this conflation of new and digital technology later.) Let’s start with a quote from Plato’s Phaedrus, a Socratic dialogue that ends with a discussion on the merits of writing:

“In fact, it [writing] will introduce forgetfulness into the soul of those who learn it: they will not practice using their memory because they will put their trust in writing, which is external and depends on signs that belong to others…” [1]

Along the same lines, are some historical quotes that WIRED magazine collected in 2006 just as Hillary Clinton was crusading against violent video games in the United States Senate. [The full list, titled “Culture Wars,” can be found here.]:

“The free access which many young people have to romances, novels, and plays has poisoned the mind and corrupted the morals of many a promising youth; and prevented others from improving their minds in useful knowledge. Parents take care to feed their children with wholesome diet; and yet how unconcerned about the provision for the mind, whether they are furnished with salutary food, or with trash, chaff, or poison?”
– Reverend Enos Hitchcock, Memoirs of the Bloomsgrove Family, 1790

“Does the telephone make men more active or more lazy? Does [it] break up home life and the old practice of visiting friends?”
– Survey conducted by the Knights of Columbus Adult Education Committee, San Francisco Bay Area, 1926

These two quotes, along with others about motion pictures, comic books, and video games, give us some perspective. Reverend Hitchcock bares a striking resemblance to the New York Times’ article about the New Digital Divide and the Knights of Columbus sound a lot like Sherry Turkle.  Both quotes, Turkle, and the New York Times all share a common set of prerequisite assumptions. 1) There exists a qualitative and categorical difference between the technology identified and past ways of doing things; 2) this change is determinist in nature and; 3) the difference is the result of adding something unnecessary or superfluous to a system that was, while far from perfect, stable or more “natural.”

These three basic assumptions, exemplified by the quotes above, appear to be rhetorically similar and cognitively related. They’re not identical arguments by any means, but I suspect that they all arise from what the German philosopher Ludwig Klages called “logocentrism” or the privileging of the spoken word over other forms of communication. Klages was putting a name to what dozens of writers before him had already thought. Jean Jacques Rousseau (18th century), and De Saussure (19th century) had already described the written word as exterior to or a representation of speech. It is only until the 1960s, when French Philosopher Jacques Derrida challenges logocentrism directly, that we begin to see speech and written language on even footing.  Both forms of communication, according to Derrida, are deferrals from arriving at true meaning. According to Derrida, both speech and text are pointing toward a third pure idea that cannot be expressed. For example, the written word “computer” and the utterance computer are not computers, nor can they fully express the entire concept of everything encompassed by the author’s idea of a computer.

Just as speech was privileged over the written word in ancient Greece, we tend to privilege the physical over the digital. A hardbound book is the real thing, while the ebook is something ephemeral or unnecessary. As our own Sarah Wanenchak describes it, “This feeling is instinctive, gut-level; it can drive us without us being explicitly aware of it.” My own print book collection and skimpy Kindle library are a testament to my own digital dualism. The feeling is so hard to shake, it seems, because the logic of the supplement is so pervasive. I don’t want to get too caught up in the different technological affordances of digital and physical copies in this post. Instead, I want to focus on the differences of technologies. What is readily considered a supplement, and what is considered natural or part of the complete. My argument is a relatively simple one: I simply want to extend the boundaries of logocentrism to explicitly include digital media. We should treat Turkle, Carr, and The New York Times, the same way Derrida treats Plato and Rousseau. Derrida is like the friend that cannot help but point out internal inconsistencies within movies. Your friend might point out that there’s no way Princess Leia can “remember images and feelings” of Padmé because she died in childbirth, while Derrida is more interested in how late Enlightenment scholars can hate on writing but still produce so much of it. Derrida calls this focus on internal paradoxes and contradictions a “double reading” and it can be a useful tool for ferreting out digital dualism.[3]

Digital dualism is pretty easy to spot once you know about it, because the distinction is so glaring. It’s like noticing a chip on your iPhone’s screen. It’s a commonly held fallacy because centuries of western thought force us to look at new technologies as an unnecessary addition to some kind of completed whole. Derrida characterized the classics’ fear of writing as a fear of the dead. The text lies there, unchanged by its audience or the discovery of new facts. It is horrifying in its lifelessness. If the written word is dead, then perhaps our fear of hypertext comes from its uncanny ability to mimic life. It is a modern-day Prometheus; animated dead text seeking a willing audience. Zombified letters and images projected onto the faces of the sorts of people we deem too dim-witted to know any better: the poor, the young, the other. The entirety of the post-modern and post-structuralist projects in social theory have been about questioning, displacing, and ultimately dismantling old boundaries. This is not because the boundaries are bad (although some are) but because they let us see things in a brand new light.

The theory of augmented reality, the idea that digital technologies are not separate but are enmeshed in previously existing social structures, is not –inherently- uncritical of the technophile or new digital tools. Far from it. Augmented reality is simply an application of the last 40 years of philosophy and social theory to our increasingly networked lives. It eschews the outmoded frameworks that lead to uncritical thought and privileged conclusions, that is, digital dualism.

This is a shortened version of a full paper accepted to Theorizing the Web 2013. Full paper forthcoming. Thanks go to Britney Summit-Gil, and the Cyborgology editors and fellow authors for confirming some initial assumptions about students.

[3] I would like to take this opportunity to note that I read Alone Together on a Kindle in a crowded car on the way to a conference. I spoke to no one.

[...] it. Although I didn’t get in to Theorizing the Web with this hackathon stuff, I looked at some of the work that was accepted and I’m looking forward to attending this weekend. There is a [...]

[...] of people’s sense of a tension between online and offline to an absurd extreme. In a recent post, he [...]

[...] On the Political Origins of Digital Dualism by David Banks » Cyborgology, February 23, 2013 A preview of the upcoming talk at the Theorizing the Web Conference. There is some overlap of the concepts and examples discussed in this post as with Carr’s early one “Is Google Making Us Stupid?” (see link #1, above), which may or may not have caught Carr’s eye (ire? j/k)…pure speculation on my part. At any rate, the final presentation by Banks, here, is clearly inspired by the events of the days following this talk preview. [...]

[...] On the Political Origins of Digital Dualism David Banks ridicules that notion by showing how technical innovations have always been looked at [...]

[...] Our work on digital dualism and augmented reality continued over the winter. Davis used Jurgenson’s typology to theorize embodiment. Wanenchak wrote about how dualist-influenced emotions can persist even when one fully recognizes that there is but one augmented reality, and Davis considered what might be behind some people’s feelings that digital interaction is less “real” or meaningful. Guest author James Vincent (@jjvincent) drew a parallel between academic critiques of digital dualism and New Aesthetic artwork. PJ Rey (@pjrey) and I began an ongoing project to flesh out both an ontology of augmented reality and a theory of augmented subjectivity; we wrote on the origins of the augmented subject and produced a genealogy of the term “augmented reality” as first steps. Jurgenson looked at digital dualism in coverage of the Manti Te’o case, and David Banks (@DA_Banks) previewed his (amazing) Theorizing the Web 2013 (#TtW13) talk on the political origins of digital dualism. [...]

[...] course, in the same vein that Plato argued the advent of writing produced inferior forms of human consciousness, we can, theoretically, argue [...]

[...] framework, a theory (“theory”) even more ‘half-baked’ than augmented reality, and yet it is utterly pervasive. This means a lot more work for those of us who want to call out digital dualism when we see it: [...]

[...] that there is a difference between being online and being offline. One of Jurgenson’s colleagues makes exactly this point, before dismissing those people as being wrong. Nick Carr argues that, actually, whether they are wrong or right, the interesting question is why [...]