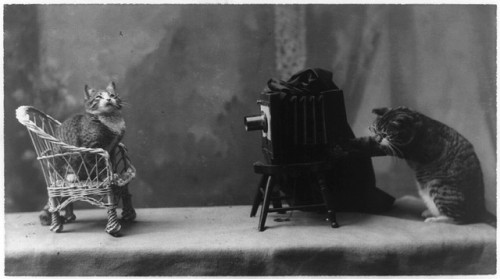 Is there a Dunbar’s Number for our documentary consciousness?

Dunbar argued that we can only keep up with about 150 people at a time, at which point we reach a cognitive saturation. Can this similar sort of saturation occur with the proliferation of ways we can document ourselves and others on social media? The ways someone holding a working smartphone can document experience grows not just with the number of sites one can post to, but also the number of available mediums of documentation: audio, video, photo, and their recombinations into things like GIFs and Vines whatever else I’m forgetting or will come next. Each new app carries with it a different audience with different expectations, adding to the documentary chaos.

Or: Given the proliferation of options, how should I document this cat?

For some, though certainly not everyone, this question is becoming increasingly difficult to answer. The most obvious answer is “don’t document that cat. Enough already.” I’m with you. I’m concerned about how social media documentation changes experience [see here, here, here, here]. I think there is good reason for why these types of documentation proliferate: most importantly, to be on social media in all its various forms is, for many, to exist. PJ Rey does an excellent job at explaining why it’s not so easy to just opt-out of all of this. In any case, this is not a post about whether this expansion in the ways of documentation is a good thing, but asking if there is a cognitive limit to all of this. So, again: How should I document this cat lying next to me?

Is she documented textually, in a tweet, or a Facebook status? Is it a photograph, and if so, with a nicer camera or with my smartphone? Instagram? Facebook? Or perhaps this is better a Snapchat, self-deleting and shared with one person? Or maybe a Lytro photograph that allows the viewer to change the focus after the fact, shifting the emphasis at will from her face to her tail? Or perhaps her tail-wagging is best captured in a soundless moving GIF using the popular GifBoom app? Or maybe make a Vine, the current “hot” app we may or may not be talking about a month from now that allows for short, quick-cut, looping videos. Many of these apps will come and go, but what is important is that photographs, video, text, and audio are being recombined in different ways for different audiences, putting a heavy load on our documentary consciousness.*

My essay on the Instagram Faux-Vintage Photo argued that social media has expanded “the camera eye” into a sort-of “Facebook Eye”, the documentary vision where more and more of life comes to be seen as a potential social media document, where the present is always a potential future past. Unlike the camera eye—viewing the world as a potential photograph—social media expands this documentary vision: we can document more, in more ways, and to more people. Again, my point here is not to complain about having so many options or to argue if this is good or bad, but to ask if there is a limit to how many different documentary understandings we can manage at once?

Can one simultaneously see the photographs, video, audio, and GIFs in front of them in real-time? Can documentary literacy be refined as to intuit between what is most shareable frozen-still versus wants to be stuck in the GIF loop? Can one see the fast Vine video in the sandwich being slowly consumed? Can we keep all of these documentary-affordances and potentialities in our head at once? Is there a limit?

To make this even more complex, we modern documentarians also need to keep all of the different audiences in mind. Indeed, that we now have been connected to large audiences to share our ephemera is in large part why we are being given so many documentary options. To see something as a potential snap (sent via Snapchat) is to already know the taste and expectations of each potential recipient. Vine users are different than your Facebook friends are different than your Tumblr followers and thus expectations multiply within the documentary consciousness.

There might just be a limit to the number of ways Silicon Valley can ask us, in the name of creativity, to capture and atomize experience into their databases.

*Whitney Erin Boesel used this similar term in her post, however, I am using it differently than she defines it there.

Lead image from the Cats and Cameras Flickr group.

[...] pomocą Documentary Oversaturation » Cyborgology. Podziel sięWięcejShare on TumblrEmailPrintDodaj do ulubionych:LubięBe the first to like this. [...]

"There might just be a limit to the number of ways Silicon Valley can ask us, in the name of creativity, to capture and atomize experience into their databases." This line is pretty significant to me, and is a large portion of why I've been extricating myself from various 'social' sites. I've found that I am wary of creating or doing anything that does not warrant documentation, this atomization into the databases. I want to alter my perspective again, swing it around to the pointless joyful existence of someone either unaware, or uncaring of the panopticon. I can't extricate myself completely, but I can make a placid island.

[...] Nathan Jurgensen on ‘Documentary Oversaturation:’  Given the proliferation of options, how should I document this cat? For some, though certainly not everyone, this question is becoming increasingly difficult to answer. The most obvious answer is “don’t document that cat. Enough already.” I’m with you. I’m concerned about how social media documentation changes experience. [...]