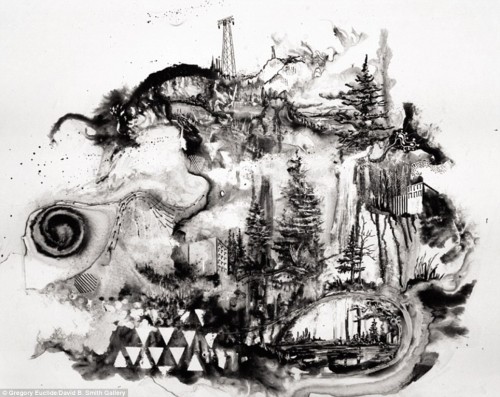 Art teacher Gregory Euclide did something interesting to the nature of his art when he decided to release prints of it.

Using sumi ink, Euclide had made a practice of creating fantastically complex images on his classroom’s whiteboard during lunch breaks in order, he says, to show students what someone skilled could create in a very short amount of time. But the duration of the process wasn’t the only point at which time came into play in these works: Euclide would then simply erase the images, often shocking his students by doing so. It was this shock — which was frequently mixed with dismay — that prompted him to release more permanent forms of some of his images (one of which has already graced the cover of Bon Iver’s self-titled album).

The erasure of the image — its essential transience — seems to be a fundamental part of the work for Euclide, and in the article linked above he muses on this and on the nature of original vs. reproduction:

In our culture, there is a strong emphasis on reproduction and the original seems less important. My students were shocked when I would erase the original, because they saw it firsthand, and they were disturbed that it was destroyed. People who do not see the original have no problem only looking at it on a screen or as a print, but once you see the original it is hard to let it go or believe that it could be destroyed.

The idea that the point of a work of complex art should be the process of its construction rather than the permanence of its completion is not a new one. That same idea underlies the Tibetan Buddhist practice of the creation of sand mandalas, where the design is intricately and carefully brought into being and then ritually destroyed as a form of meditation on the transience of life. The whole of the art exists within the process itself in that case — if one captures an image of it, it could be argued that the image (being longer-lived if not actually permanent) has missed the artist’s point and therefore has failed to capture the essence of the art in a more meaningful way.

In the past I’ve written about how images of time-laden things have a way of removing them from time, or at least of changing their relationship with the temporal in some subtle ways, in the instances of images of ruined or abandoned space. Considering Euclide’s lasting captured images of originally transient work, I wonder what the translation of original to reproduction does to the nature and experience of these kinds of works of art (one could also make a case that a similar effect is at work in captured images of street art). What do these pieces mean without the ritual aspect of destruction? What do they mean when divorced from the purposeful effects of time?

Moreover, I think it’s worth considering what the phenomenon of ambient documentation does to our experience of process — of our lives as ongoing, fluid, moving realities rather than as a series of events captured or subject to capture through forms of technological documentation. If, as Nathan Jurgenson has put it, “social media increasingly force us to view our present as always a potential documented past“, what does that do to our sense of the transience of that present? If we increasingly perceive our own lived experience as something constantly subject to documentation, what does that do to our experience of time as it relates to us — to our decline and eventual absence? How does the documentation of my life change my experience of my present and my imagination of my future?

The idea of documentation as a form of grasping for immortality is obviously not new at all, but I would argue that social media technologies — which seem to alter and augment rather than replace the preexisting in general — are changing exactly how and why this occurs. I (and lots of other people) have already argued that technology makes our experience of time more fundamentally atemporal; in addition I argue that it makes our grasp of transience more profoundly slippery.

We don’t have to contemplate the impermanence of a sand mandala or Euclide’s sumi drawings — in a few seconds we have their image, and then the image is everywhere. But — like Euclide’s students — do we feel like our relationship with the image is different from the time-laden original? Or does it matter if the original is something that we’ve never even seen?

[...] Time, Transience, and Documentation (Sarah Wanenchak at Cyborgology) I think it’s worth considering what the phenomenon of ambient [...]