Will the IPO Change the Way Users See Facebook? 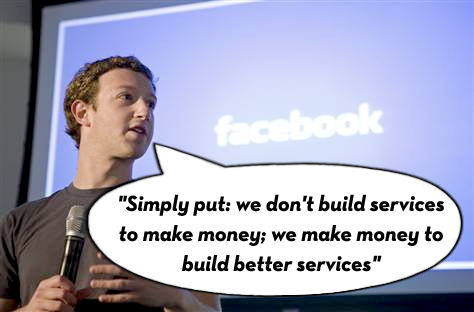 Tomorrow’s initial public offering of Facebook stock has both business and tech commentators chattering away (though, in most mainstream publications, there isn’t meaningful distinction between the two). Technology coverage is too often reduced to the business of technology. Consider the top four tech headlines on the New York Times site today: “Long Odds on a Big Facebook Payday,” “Ahead of Facebook I.P.O., a Skeptical Madison Ave.,” “Spotify Deal Would Value Company at $4 Billion, “Pinterest Raises $100 Million.”

Buried in the all the personal investing advice, some interesting quesitons are being raised. For example: How can a company with few employees and so little material infrastructure generate so much value? What is it that Facebook actually produces? Is an economy based in immaterial products and services sustainable (especially given that it’s profitability is largely dependent on it’s ability to drive additional consumption in other sectors through advertising)?

But there are also a lot of questions that aren’t being asked—the kinds of culturally significant questions that business folks and economists aren’t (though perhaps should be) interested in. Here, I want ask one such question: Will Facebook’s transition to a public corporation change the way users perceive their participation on the site? While I can only speculate about how this institutional change will effect users, I want offer a few reasons I think Facebook’s IPO may cause users to see themselves in more of an explicit work-like relationship with Facebook (based on rationalistic principles of minimizing cost and maximizing gain) and less a part of some sort of non-rationalized gift economy (based on principles of sharing and reciprocity). I should be clear, here, that I am talking about users’ relationship to the platform, not their relationships with each other. Users are, of course, primarily motivated to use the platform because of their relationships with other users; however, as recent privacy debates have illustrated, a user’s perceptions of Facebook are important in determining how users use the platform and whether they use it at all.

As Facebook evolves into a public corporation, the role users play in producing value may become more apparent and more controversial for several reasons:

Facebook’s mystique of benevolence will be harder to maintain – Facebook has actively resisted  the perception that it is just another company out to make a buck. In a letter included in Facebook’s IPO registration statement, Mark Zuckerberg said:

I started off by writing the first version of Facebook myself because it was something I wanted to exist… Simply put: we don’t build services to make money; we make money to build better services.

And we think this is a good way to build something. These days I think more and more people want to use services from companies that believe in something beyond simply maximizing profits.

What Zuckerberg doesn’t say here is that Facebook is just any old company. It has a unique relationship with the users who entrust the Facebook to manage enormous amounts of personal data, knowing that mistakes can have profound social consequences. That unique relationship puts Facebook under more scrutiny by it’s users than, say, a company like Walmart receives from its customers. So, threats to it’s mystique of being something more than just-another-company are particularly problematic. As a public entity, Facebook with be subject to pressure by shareholders to make changes for the sake of producing revenue that are contrary to the interests of users.

The financial curtain will be rolled back – As a publicly-traded company, Facebook will be required to make extensive public reports on the state of its finances that have, in the past, remained internal to the company. This will, no doubt, lead to an intensification of media coverage on how Facebook is deriving value from its users.

The need to justify market valuation – While Facebook’s stock price, like all stock prices, is largely speculative, Zuckerberg and other executives will be under constant pressure to produce new revenue streams (e.g., charging users to ensure that their posts are highly visible). We all better get used to hearing daily updates on fluctuations in Facebook’s stock price. This will have the effect of priming us to think about the financial aspects of our Facebook usage.

So, what are the consequences if users start to view themselves as doing work for Facebook?

Pretty quickly, users should realize that they are being exploited (see: here and here)—i.e., they are creating lots money for Facebook, but that they aren’t seeing a cent of it. Of course, users do get lots of social value from Facebook, but greater attention to the economic dimension highlights Facebook’s dependency on users (let me be esoteric for a second and say this is the same sort of relationship Hegel was talking about in his master-slave dialectic). In a sense, by subjecting its finances to the disclosure regulations and revenue expectations of Wall Street, Facebook may be empowering users to leverage this relationship of dependency in debates over privacy policy and platform features.

PJ Rey (@pjrey) is a sociologist at the University of Maryland working to describe how social media and other technology reflect and change our culture and the economy.

If we all leave, then he will have nothing!

Wouldn't it be weird if everyone left and it became a B2B site?

Great piece PJ, guess we'll have to wait and see!

In order to shrink facebook and have people leave you have to make it fashionable to do so… you probably need highly influential trend setters and early adopters to publicly do away with facebook. The interesting question is why hasn’t this happened yet? It happens to almost everything else. Being on facebook needs to be rendered an embarrassment, left for the middle age-parent-family set, like match.com, aol and other sites that seem to want to be around forever. I think this course of events will eventually happen.

great points, pj! and now with weekly stock-price updates tech commentators will spend even more time talking the business of facebook rather than the social ramifications...

[...] 10.40: Will the IPO Change the Way Users See Facebook? It has a unique relationship with the users who entrust the Facebook to manage enormous amounts of personal data, knowing that mistakes can have profound social consequences. That unique relationship puts Facebook under more scrutiny by it’s users than, say, a company like Walmart receives from its customers. So, threats to it’s mystique of being something more than just-another-company are particularly problematic. As a public entity, Facebook with be subject to pressure by shareholders to make changes for the sake of producing revenue that are contrary to the interests of users. [...]

[...] This article originally appeared on Cyborgology. [...]