Reaction: Turkle, Tufekci and Marche on the Diane Rehm Show 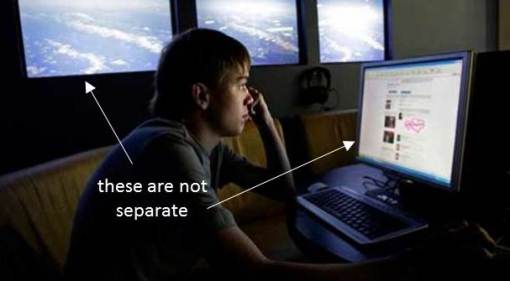 –Listen to the show here–

The Diane Rehm Show took to the air, ending 45 minutes ago, to debate how Facebook is making us lonely and disconnected and ruining just about everything. This is my quick first-reaction. On one side was Sherry Turkle, that avatar of “digital dualism” (more on this below) who recently wrote “The Flight From Conversation” in the New York Times and Stephen Marche who wrote “Is Facebook making us Lonely?” in The Atlantic. On the other side was Zeynep Tufekci, a researcher who communicates as well as these journalists*, responding to Turkle (also in the Atlantic). While Turkle and Marche’s headlines are intentionally catchy and dramatic, they are also sensationalist and misleading. The reality is not as captivating and Tufekci’s headline in response is far more accurate: “Social Media’s Small, Positive Role in Human Relationships.”

This is one of the many lessons provided by this hour of NPR: catchy arguments tend to trump data, even on nerdtacular public radio. Tufekci, outnumbered, did well given the dearth of air time provided relative to the more sensationalist ideas on the show. Further, the show (@drshow) seemed completely unaware of the fast-moving and engaging Twitter backchannel discussing the topics in much more nuance and detail than much of what was said on-air. [You’ve already enjoyed the irony of this as opposed to Turkle’s argument, right? Obviously.]

The next lesson we learn is that while many of us social scientist and humanities scholars all take for granted that self-presentation is, in part, somewhat a performance, many still hold onto the notion that the self is purely authentic; no performance involved. When Turkle and Marche started saying that we perform ourselves online (indeed we do), they mistakenly pitted this against the offline. My reaction on Twitter, “dear @sturkle, performing the self is not an invention of social media.” Marche replied to me, “You lead a different life from mine. Your life is constant self-presentation?”

This is a telling response: the assumption that his offline self is not performed (I’m basing this on the whole series of tweets from Marche to me, check Twitter for more; anyone want to do a Storify of the conversation?). Sociology 101 might be obvious to most of us, but still new to many, even those with authority to speak in high-profile outlets. As social media researchers, we need to do a better job talking about social media trends keeping in mind history did not start or end with these new technologies (@pjrey made this point during the show). If we talk about self-performance online, we must take into account how this operates offline. Goffman wasn’t writing about Facebook and identity-theater predates Twitter.

This takes me to the main take-away from this hour of radio, and it is a major disconnect between how Turkle/Marche and Tufekci fundamentally understand the relationship between the on and offline. On one side -introducing Team Turkle- there are those who see someone on Facebook or texting and assume they are removed from the offline, physical world. This is the zero-sum view of the on/offline: the more time you spend online, the less offline; we are trading one for the other. The term I coined to capture this assumption is “digital dualism,” that the on and offline are separate and thus one displaces the other. David Banks also compellingly made this point in reaction to Turkle: “Sherry Turkle’s Chronic Digital Dualism Problem.”

Tufekci tried to promote the opposite view, that the on/offline are not separate, that time spent online can actually increase offline connection. I have described this enmeshing as the formation of an “augmented reality.” Read more: “Digital Dualism Versus Augmented Reality.”

In short, the data here is not “ambiguous” as Marche stated and made established social media researched Shelia Cotten laugh. No, the data clearly demonstrates that the on and offline do not always displace each other (see Tufekci’s piece above for a bunch of great links, or, my favorite is Pew’s Internet and American Life project). The digital dualism of Turkle and Marche is unfounded. It simply does not reflect the social media that we have come to know. I get that for many social media non-users or newcomers Turkle’s description of people alone and disconnected while staring at their Facebook screens like Sad-Zuckerberg at the end of The Social Network is intuitively true. But, in the end, it isn’t intuition that counts, it’s data. And I wish that Turkle, Marche and especially the Diane Rehm Show cared more about data than sensationalism.

To end on a positive note, I am happy the show had Tufekci on, even if not giving her half of the story anywhere close to half the time (not that all opinions should be given equal time; if i had my druthers the Turkle/Marche argument could have been made by a caller and then deconstructed with data by Tufekci and we’d all move on, but, oh well, people have ads to sell). I’m happy because Tufekci provided a compelling and important counterpoint to web-fallacies in a high-profile outlet. And, most of all, this hour of radio dramatically illustrated why we need to Theorize the Web.

Here is Storify of some of the highlights of the Twitter backchannel conversation during the show courtesy of Behzod Sirjani: “Social Media and Loneliness.” [The embed code is not working for me, sorry.]

It's really all about how you use social media. Recent "crowd-sourced" movements like occupy and M15 really illustrate your point that the internet supports and structures a lot of face-to-face relations (see my blog post on www.occupthesocial.com about this. However, if you are just using facebook to share pictures of cats, then sure it feels lonely. As well, twitter and facebook are entirely different in their interaction capacity, so even to say 'social media' is a bit of a misdirection when we really need specificity in communication style and purpose.

There were lots of problems with this radio show. Starting off with "seniors" being lonely has other reasons: they retire from their work communities, their friends may not be living, they may have disabilities which impede travel. All of those things effect socialization.

People have been "lonely" since families broke up and people started migrating for work.

The assumption that if people are looking at a screen by themselves then they are "lonely" is absurd.

The bottom line on all this research is that we do not know the "content" of what people create on these devices, we only know they are talking or communicating. Because we don't know the content of most of the messages, we cannot make these assumptions.

In our research on PolySocial Reality (PoSR), the space containing synchronous or asynchronous multiplexed individuated data creations, we write and talk about more the type of message transmission, not the content--because we can't know it wholly, meaning both parts of the conversation. We're interested in whether or not having to respond to multiplexed messages actually does create individuation, or, as we talked about in our TtW2012 talk this year, if asynchronicity is being used as an adaptation to free up time for synchronous communication.

Ironically, since Turkle keeps writing books, she is encouraging people to read. Alone. A solitary activity.

If she were really interested in sociability, wouldn't she stop writing books and just have "discussion" groups?

What gets me is that Marche and Turkle cite only anecdotal evidence or, at best, small sample psyche studies. They are always looking for exceptional cases. Then, they use these case to represent the medium, ignoring all the contrary data on typical users.

Social media commentators of the world: Please spend a few hours with this site before writing an article on the topic: http://www.pewinternet.org/ Thanks.

If it is all about data, we shouldn't even be bothered. That's where computers are simply better, more apt. And the opposite of data is certainly not 'sensationalism'; if it was, Weizenbaum's ELIZA should be making the case. For the cats. They might click the 'I-like-button'.

When will we start a conversation about us rather than about tech?

On a personal note, the balance of the presenters reminds me of when I was on Talk of the Nation seven years ago or so, and the topic was relationships and online relationships in particular. On one side was, not including the host, an advice columnist and a husband/wife historian pair who had written on long-term romance. On the other side was me, representing, by default, the positives of first meeting someone online to form relationships. I had data of 90 couples/180 individuals, though not a random sample. They had from zero data to a few writing in about problems.

We really do need to theorize the web, and pew-ize the data used by journalists, good point.

+1 for all of the above! I'd be especially interested in studies of semi-private social media groups, because I definitely feel that those are good examples of augmentated reality.

[...] emotional concern she seems to expect her audience to take away is that children are being harmed. (Others do a better job than I can critiquing Turkle’s “digital dualism” problem, like [...]

[...] There is a good critical discussion of this point by Nathan Jurgensen here. [...]

Eva Illouz argues that a number of social changes make people "the authentic" self palpable and consequential. These changes include feminism, hiring and corporate training practices, therapy culture, and online self-presentations where you have one broadly viewable profile. So it isn't that Goffman doesn't give us analytical purchase in many cases, but Goffman's theories aren't necessarily many people's reflexive experiences of the world. Our reflexive self-understandings (including our social theories) come out of our social positionalities. Illouz's book "Cold Intimacies: The Making of Emotional Capitalism" is awesome. I highly recommend.