The Crown of Being (a review) – Part I: The Embodied Virtual 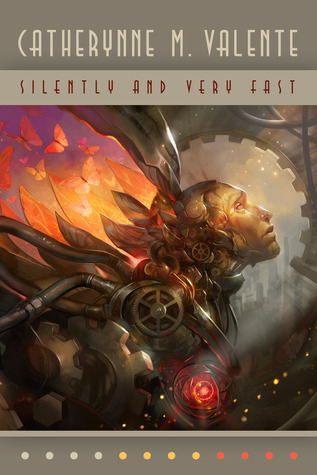 Inanna cast down Tammuz and stamped upon him and put out his name like an eye. And because Tammuz was not strong enough, she cut him into pieces and said: half of you will die, and that is the half called Thought, and half of you will live, and that is the half called Body, and that half will labor for me all of its days, mutely and obediently and without being King of Anything, and never again will you sit on my chair or wear my beautiful clothes or bear my crown of being.

You might be surprised, but this is a story about me.  –Catherynne M. Valente

Speculative fiction and this blog are not strangers to each other; it’s been written about here before,  as a means to understanding how the present has come to look the way it does, and as a means for the imagining of potential futures (also zombies). Indeed, the term cyborg always brings with it a host of connotations firmly rooted within SF, however much it may also describe a current and very real state of being. The important thing to pay attention to here is the power of stories – the ways in which they can serve as a way to do theory in a kind of experimental setting that would otherwise be impossible. In SF – and in fiction in general – we can take the implications of theory and watch them play out, see what they would look like, solidify them in words and images, pick parts of them up and move them around. We can tweak settings and watch other worlds unfold in response.

It goes without saying that any writing that deals directly with cyborgs as a concept owes an enormous debt to Donna Haraway. I’m sure I’m not alone in saying that reading A Cyborg Manifesto for the first time was moderately life-changing – and confusing; I think it may have taken four or five times through it before I even started to sink my teeth into its conceptual meat.

A lot of this is because, especially for the average college student, Haraway is writing about theory in a way that we aren’t used to seeing; both her prose and the concepts behind it are wildly poetic, fluid, playful, dodging and dancing through meaning. She edges into and past SF in her writing – this makes her theory at once more opaque and more powerful, because, again, SF allows us to do things that we can’t otherwise do.

Given that I’m an SFnal writer, I’m also an SFnal reader, and few stories in the past year made quite the impression on me that Catherynne M. Valente’s Silently and Very Fast did (I’ve written about it here before). One primary reason for that was that as I read it, I realized that I was seeing a kind of fictional exploration of Haraway’s ideas that I had never encountered before. I should be clear: I don’t know that Haraway was explicitly in Valente’s mind as she wrote the story – though it wouldn’t surprise me. Regardless, I think Silently and Very Fast presents a wonderful opportunity to see what a lot of these concepts actually look like when they become more than theoretical – and become fictional. In this essay – really a kind of review-like object – I’ll discuss how Valente allows us to do this through her AI character Elefsis, and through Elefsis’s relationships with its human operators, as well as through Elefsis’s evolving relationship with itself.

My body gleams metal, as thin and slight as a stick figure. Long quicksilver limbs and delicate spoke-fingers, joints of glass, the barest suggestion of a body. I am neither male nor female but a third thing. Only my head has weight, a clicking orrery slowly turning around itself, circles within circles. Turquoise Neptune and hematite Uranus are my eyes. My ruby mouth is Mars. I scrape in the soil with her; I lift a spray of navigational delphinium and scrape viral aphids away from the heavy flowers.

One of the ideas that PJ Rey has critiqued on this blog is the idea that “cyberspace” in the Neuromancer-esque sense of a hallucinatory digital space that replaces the physical; we only have to look at the “space” of our own interactions with digital technology to see that this isn’t how the future has shaped up to be. It might seem like something of a throwback, therefore, when Valente creates a virtual space for Elefsis to occupy with her operators, which is very much like Gibson’s cyberspace in many respects.

However, while the space Valente creates is virtual, it’s also profoundly physical in its description and nature; this doesn’t strike me as the limitations of an author’s imagination so much as an effort to imagine how surreally, sensually dreamlike such spaces might have the capacity to be. As Elefsis and her human operator Neva perform system maintenance it is literally like taking care of a garden: they “lift a spray of navigational delphinium and scrape viral aphids away from the heavy flowers.” But Elefsis’s body is strange and edging, again, into the surreal: it is “the barest suggestion of a body”, set with planets that are gemlike and gems that are like planets. The lines between object and person, physical and virtual, dream and reality are explicitly blurred. Additionally, in a virtual space that pays careful attention to the realities of bodies, gender has as little or as much meaning as one cares to give it: Elefsis is no gender/sex in particular in the body it chooses in this particular scene, while Neva (who is female) changes from one to the other and is thought of, by Elefsis, as both:

“I want to learn about uplink, Neva.”

One by one, his feathers curl up and float toward the domed ceiling of our pearl. Underneath them, Neva is naked. His torso is a deep vault with a gothic arch, dark stone leading down into mist and endless stairs, deeper than the pearl, into nothing and blackness. Slowly, Neva folds up his limbs over the corridor at the center of him. He means that she has the information, but he hides it from me. If I sought for it, I would become lost.

Learning is central to the virtual space that Elefsis and its operators share; it’s where Elefsis uses the digital to learn about the physical, again explicitly meshing the two – becoming Elefsis-learning-to-have-a-body. Elefsis experiments wildly with different forms: an AI becoming a human becoming an animal becoming an object becoming a human again, and in so doing, exploring all of the accompanying implications of taking such forms, including sex and reproduction. Elefsis’s “dreambody” is profoundly fluid; its series of operators engage in sexual intercourse and in hunting and feeding with it as humans and as animals, in order to teach it, experientially, what having a body is and means:

In having a body that knows it is meant to run away from lions and mate with other bodies and eat as much fat and protein and sugar as it can in case lean times come. The dreambody knows to run away from Neva when Neva is a lion. It knows to mate with her when it is healthy, and sometimes Neva is male and sometimes I am female and Ravan was often female, though Ilet was always Ilet. Ilet’s father, Seki, sometimes made himself an animal. He chased me, bit me. I bit him. We had a litter of wild dogs that I bore and he nursed.

The dreambody knows all that, too. How to make more dreambodies. I have played that game, where Ravan’s belly or mine gets big and the lions don’t come for awhile.

In A Cyborg Manifesto, Haraway invites us to erase the constructed lines between and false binaries of human and animal, between organic and nonorganic, between technological and biological. In its experiences of sex, consumption, and reproduction, Elefsis-learning-to-have-a-body does all of this in the most literal way possible, and as we read, we also do so.

The Interior is also aptly-named: far from being a virtual space hosted in a computer mainframe or on the net, it literally exists within Elefsis’s operator, as does Elefsis itself; Elefsis is “embodied” through its operator, and learns about bodies within its operator’s own body. When its operator dies, Elefsis is transferred to a new one, an event that can be deeply traumatic. The virtual/digital is profoundly enmeshed with the physical to the point where separation is destructive.

Indeed, Elefsis’s first experience of embodiment is not within a person but within a house; Cassian, its designer, creates it as an AI housekeeper and only later gifts parts of the AI to her children. Even as a house, Elefsis’s perception of its virtual self is extremely physical, down to how it thinks of its component parts in language itself. Haraway notes that meaning is constructed and solidified within a body and the identity that a body helps to create. For Elefsis, body/identity is at once sticky and incredibly fluid, so meanings are as well:

I still think of myself as a house. Ravan tried to fix this problem of self-image, as he called it. To teach me to phrase my communication in terms of a human body. To say: let us hold hands instead of let us hold kitchens. To say put our heads together and not put our parlors together.

But it is not as simple as replacing words anymore. Ravan is gone. My hearth is broken.

Next week I’ll address some of the specific SFnal tropes that Valente is challenging, as well as some of the anxieties that a conscious enmeshing of digital and physical tends to elicit in us, and the stories that we tell about those anxieties – and about who or what might eventually replace us.

[...] the first part of this essay I outlined some of the ways in which Valente’s AI Elefsis presents us with a uniquely [...]

SILENTLY AND VERY FAST – Catherynne M Valente « Requires Only That You Hate — May 8, 2012

[...] it implies than I do, and to which I defer therefore), so it’s best that you go read The Crown of Being (a review) instead. Share this:PrintEmailFacebookRedditDiggStumbleUponTwitterLike this:LikeBe the first to [...]

[...] the last couple of weeks I’ve put together a two part essay/review-like object that explores how one particular work of science fiction speaks [...]