Since Sarah posted on Kony yesterday, I though I would throw in my two cents on the matter. I would like to discuss claims that the Kony 2012 is a hipster movement. 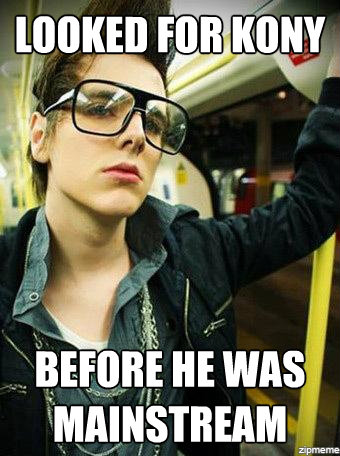 First, as Sarah Wanenchek so eloquently argued yesterday, the Kony 2012 movement has been successful largely because it has been spread “virally” via social media like Facebook, Twitter, and Tumblr. The fact that the video has reached over 75 million views in a little over a week plays testament to this fact. However, social media is often treated like a hipster’s playground because it is “new” and “hip” and platforms like Facebook lend themselves nicely to self-promotion and vanity, two things hipsters are said to do quite well. The video below, titled “Future Hipsters,” helps encapsulate this sentiment.

The video pokes fun at hipster culture by sarcastically looking at the “good ole days” of social media and hipster self-promotion . The video is “funny” because the viewer can feel smug knowing that all those cool kids will one day be uncool when conditions change (I guess the producers want to the viewers to assume that the golden days of social media are already over and that in the near future people will be unable to self-promote to the extent they do now).

Secondly, Invisible Children (which created the Kony 2012 video) plays into the larger college student social justice movement. For many privileged young people in this country, college is the first time they learn about social inequality, acting as a sort of “consciousness-raising” period of young adulthood (Broido, 2000). For many young, white, suburban adolescents, trading in their Vans for a pair of Tom’s shoes is a very powerful act of self-determination. Unfortunately, these shoes have themselves become more of a status signifier, signalling pseudo-bohemian tastes and center-left political leanings. Hence, Tom shoes become but another signifier of “hipster” status (or Christian hipster status, if you want to get more specific).

I recall how popular Invisible Children was when I was an undergrad just a few years ago; I also recall feeling quite bitter that other pressing social problems like education, poverty, and the prison reform were receiving such scant attention. It seemed to me that more immediate social problems were being relegated to the sidelines in an effort to draw attention to white paternalism and “lets save Africa” rhetoric. For some people, including myself, Invisible Children feels more like glorified backpatting. Jesse Daniels, over at RacismReview, just wrote a wonderful piece highlighting the white racism behind the Kony 2012 movement.

Perhaps most importantly, the Kony 2012 has been charged as a hipster movement because of how its supporters have used it as a form of social distinction. I draw your attention back to this series of tweets posted on BuzzFeed last week. Here we can see how individuals are positioning themselves alongside the Kony 2012 zeitgeist through what I like to call “foundation narratives.”

Foundation narratives are narrative accounts of one’s personal involvement to a particular sub/counter culture. They serve as status claims aimed at protecting an individual’s identity investments from later adopters (Arsel and Thompson, 2010).

So in this case the “field” of Kony 2012 expanded greatly as a result of the bandwagon effect and the viral spread of the Kony 2012 video through social media. Individuals who identified with the Kony 2012 movement felt threatened by the new public awareness; their identities as Invisible Children activists came to be seen as a result of the bandwagon effect. Hence the explosion of Tweets defending individual’s involvements in this movement. “I hate trendy activists” thereby becomes both an identity defense mechanism and a subtle critique of later adopters (ie: “posers”).

In my opinion, these are the real hipsters of the Kony 2012 movement. Why? Because they are mocking public  attention to Kony as a form of social status. If we define hipsters as people who seek social distinction through deliberate anti-conformity, then these individuals are setting the standard.

Kony 2012 also plays into the hipster ideal of "slacktivism." For 6 months in college I lived in a 30-person co-op. While half of us were political science students (or rogue biology students in my case...) who were out organizing protests and fundraisers, the hipster-half of the house sort-of cared about our causes, but not enough to step out of their routine of smoking American spirits and riding their fixies to the bar.

[...] have been much discussed on the Cyborgology blog (see: here, here, here, and here). Cyborgology authors have also talked about the fetishization of low-tech/analog media [...]

[...] have been much discussed on the Cyborgology blog (see: here, here, here, and here). Cyborgology authors have also talked about the fetishization of low-tech/analog media [...]