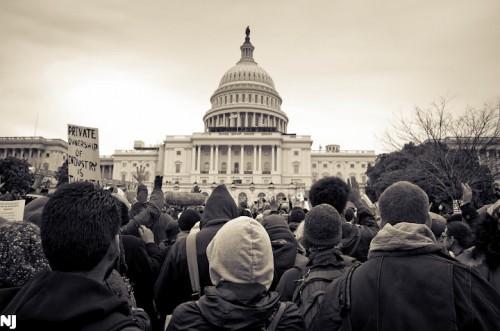 We call our results tactics, rather than methodologies, strategies, or universal guarantors of truth. Tactics lead not to the true or final design solution but to the contingent and collaborative construction of other narratives. These other narratives remain partial and approximate, but they are irrevocably opened up to problematization.

I will employ the language and approach of the “tactical survey” to offer a new set of conceptual tools for understanding augmented protest and revolution. It is my aim that they prove useful for activists as well as academics and journalists following Occupy Wall Street and similar movements. This first part focuses on the intersections of transparency, social media, privilege, and public depictions of protest. Part 2 will cover the utilization of corporate technological systems (e.g. Apple products, Twitter) and building alternatives to those systems (e.g. Vibe, Diaspora). These tactics are forged from observations (first hand and otherwise) of the #OWS movement. They are intentionally abstract, because they are menat to apply to a wide range of instances and scenarios.

Diversity of Tactics and the limitations of sousveillance 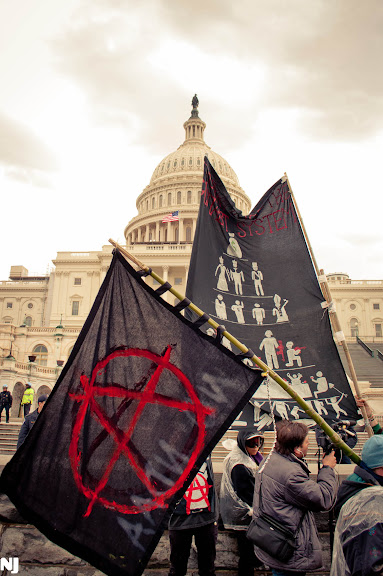 Last Monday, Chris Hedges posted a scathing critique of the black bloc tactics exercised in Oakland and New York. He describes black bloc tactics as “The Cancer in Occupy” (that is also the title of the piece) and calls on the occupy movement as a whole to oppose and denounce “black bloc anarchists.” Hedges characterizes black blocs as “…an inchoate rage to be unleashed on any target. Pity, compassion and tenderness are banished for the intoxication of power. It is the same sickness that fuels the swarms of police who pepper-spray and beat peaceful demonstrators. It is the sickness of soldiers in war. It turns human beings into beasts.”

The anarchist community has replied to Hedges’ piece with equal parts anger and resolve. Anthropologist, black bloc veteran, and anarchist scholar Dr. David Graeber wrote a reply in n+1 magazine  where he expressed concern that Hedge’s article had the capacity to do much more harm than any “black-clad teenager throwing rocks.” The message is dangerous, according to Graeber, because it destroys important lines of communication among activists. Graeber explains,

… “diversity of tactics” means leaving such matters up to individual conscience, rather than imposing a code on anyone. Partly,this is because imposing such a code invariably backfires. In practice, it means some groups break off in indignation and do even more militant things than they would have otherwise, without coordinating with anyone else—as happened, for instance, in Seattle.

Hedges and many others seem to think that recording and disseminating unjustified acts of police violence can win the war of words. That black bloc tactics muddy the message and give the media an excuse to call a protest a mob. This is simply not the case:

Sometimes, with the help of social media, we can demonstrate that particular police attacks were absolutely unjustified, as with the famous Tony Bologna pepper-spray incident. But we cannot by definition prove all police attacks were unjustified, even all attacks at one particular march; it’s simply physically impossible to film every thing that happens from every possible angle all the time. Therefore we can expect that whatever we do, the media will dutifully report “protesters engaged in clashes with police” rather than “police attacked non-violent protesters.”

I have written on the power of sousveillance in the past, but must agree that there are limitations to its efficacy in the national context. Graeber is quick to note that the images of civil rights protestors getting blasted with fire hoses were recognized as police violence mainly because “Americans at the time didn’t view the Deep South as part of the same country.” Nathan Jurgenson has written in the Atlantic on the delicate balance between transparency and anonymity in the Occupy movements. Dissemination of information by the likes of Tim Pool and others have forced tough truths into the spotlight, but his reporting must still compete in a national conversation with the likes of Fox News and other forms of corporate media. When raw footage is broadly available, it is interpreted through previously held beliefs and ideologies. For example, when I blogged for Occupy Albany, many conservative commenters pointed to arrest records as evidence of violent protest tactics, not police brutality or selective enforcement. Cognitive scientists have a term for this- confirmation bias.

Tactic 1: Social media is an extremely  powerful tool, but should not be treated as a panacea for corporate, ideologically-driven media coverage. Images and data conveyed via social media can challenge previously held beliefs, but are also subject to the effects of confirmation bias. This means the principles of transparency, privacy, and nonviolence, are a double-edged sword for activists and their causes. Consider these principles in relation to one another, in various dimensions.

The Privilege of Inviting Transparency

This blog frequently revisits the topic of privacy on the internet. Most mainstream coverage of privacy fails to describe what privacy actually looks like, and what it is supposed to accomplish. If a particularly gregarious Facebook user shares everything about themselves, but deletes the content after a few hours, is that an example of privacy or transparency? In the aforementioned Atlantic article, it is obvious that there is no universal boundaries for privacy and transparency. Transparency, as an ideal, is a function of several extrinsic factors that include but are not limited to: the privileged status of those being recorded; the likelihood that the means of a certain tactic will play into existing narratives or stereotypes; and/or the desire for a “safe space” where sensitive issues are discussed.

Within occupations, issues of transparency and privacy are often embedded within larger discussions of what it takes to create safe spaces for specific conversations and actions. Occupations frequently establish caucuses for people of color, women, LGBT communities, the homeless, and even self-described political radicals. These are places where those who share a common affinity can organize and call out occupations for their own acts of privilege or unintended racism classism, or sexism. These are platforms for internally dealing with the kinds of structural prejudice that all mass movements must deal with. In order for caucuses to function, they cannot put all of their meetings on ustream or even necessarily announce where and when they are meeting. Caucuses frequently deal with allegations of separatism and reverse racism. Such accusations often do more to derail important conversations all-together, rather than confronting intricate problems with well thought-out arguments made in the confidence of like-minded others.

Tactic 2: Notions of transparency and privacy are not only constantly evolving, they are also a function of privilege, tactics, and expected reception by an imagined audience. Universal concepts or policies of transparency and privacy are often detrimental to or discount the experiences of historically disadvantaged groups. Always consider the subject and imagined audiences of recorded and widely disseminated images and text.

Whenever a Ustream  goes live from a news-studio-in-a-backpack, or a critique of tactics and ideology goes out on the web, the researcher or reflexive activist should begin looking for or considering the effects of-

[...] again, we see the delicate interplay of transparency and privacy that characterizes Occupy Wall Street. For Global Square, privacy of the individual is paramount, [...]

[...] Augmented activism is a new tactic but, as we have said before, it is constantly being improved and refined. As I write this, over 31,000 people have “liked” the “Boycott Rush Limbaugh’s Sponsors to SHUT HIM DOWN” page. (In the time it took to proof this post and get distracted by this youtube video another 1,000 or so people liked it.) Although Rush no longer makes the trending topics list, my Twitter feed is still full of Rush-related tweets. The Facebook page is full of people swapping stories about their calls to various advertisers and questions about what advertisers are left. For example here are a few posts about Netflix: [...]

[...] Augmented activism is a new tactic but, as we have said before, it is constantly being improved and refined. As I write this, over 31,000 people have “liked” the “Boycott Rush Limbaugh’s Sponsors to SHUT HIM DOWN” page. (In the time it took to proof this post and get distracted by this youtube video another 1,000 or so people liked it.) Although Rush no longer makes the trending topics list, my Twitter feed is still full of Rush-related tweets. The Facebook page is full of people swapping stories about their calls to various advertisers and questions about what advertisers are left. For example here are a few posts about Netflix: [...]

[...] tactics for how to incorporate technology in activist work. Part 1 was originally posted here and part 2 was [...]