The Zombie in Film (Part 1: The Early Cinematic Zombie)

Below is Part 1 of a three part essay I will be presenting at the 2012 Southwest Texas Popular Culture Association meetings in Albuquerque, New Mexico on February 9th. I will be presenting alongside several other scholars for a series of panels titled “The Apocalypse in Popular Culture.” A (much) earlier version of this paper can be found on the Sociological Images sister blog. Part 1 discusses the first wave of zombie cinema 1920-1950s. 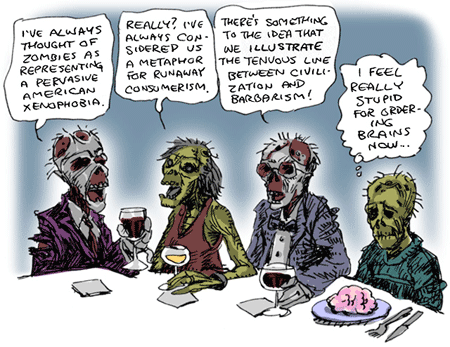 The Zombie in Film: From Haitian Folklore to Apocalyptic Anxieties

If you are alive these days, and not already part of the undead masses yourself, you probably have noticed a staggering increase of zombie references in film, television, pop culture, videogames and the internet.
For instance, the big screen and small screen have both hosted a plethora of zombie films including the more popular blockbusters 28 Days Later (2002), Shaun of the Dead (2004), and I Am Legend (2007). In television, we have seen the recent success of AMC’s The Walking Dead, based on the comic book series of the same name. In pop culture, we have seen the viral video of penitentiary inmates dancing to Michael Jackson’s “Thriller” and even the popular television sitcom Glee host its own rendition of the dance. And if you are on a college campus like myself, you have probably seen undergraduates playing “Zombies Vs. Humans,” a game of tag in which “human” players must defend against the horde of “zombie” players by “stunning” them with Nerf weapons and tube socks. In videogames, we have seen the success of the Resident Evil franchise, eventually culminating in a series of films staring Mila Jovovich, as well as more recent games like Left 4 Dead and Dead Rising. Finally, the internet is awash with zombie culture. From post-apocalyptic zombie societies to zombie fansites and blogs.
But what is the zombie and where does it come from?
Bishop’s (2010:20) “taxonomy” of the dead” is a useful for articulating the different conceptualizations of the zombie as it has appeared in film. In my opinion, however, the zombie can be reduced to three main types: the somnambulist (ie: mind control slave-zombie), the cannibalistic corpse (ie: undead eaters), and the infected living (eg: the “rage virus” of 28 Days Later). 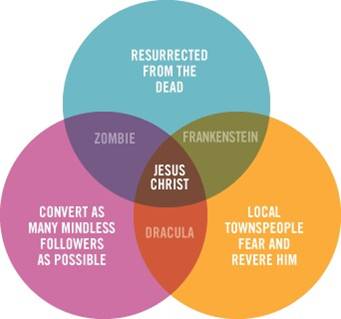 What makes the zombie unique from other movie monsters is its unique place of origin. Whereas Frankenstein, Dracula, and the Wolfman all have ties to the Gothic literary tradition, the zombie stands apart in having a relatively recent (and proximal) origin. Theorists of zombie culture (such as Kyle Bishop or Jamie Russell), attribute the origin of the zombie to Haitian folklore and the hybrid religion of voodoo. But the zombie didn’t make its away into American culture until the 1920s and 30s, when sensationalist travel narratives were popular with Western readers. Specifically, W.B. Seabrook’s book The Magic Island, is often credited as the first popular text to describe the Haitian zombie. Additionally, the work of Zora Neale Hurston (specifically her 1937 book Tell My Horse) explores the folklore surrounding the zombie in Haitian mythology.
With the development of the motion picture, the zombie became a staple of horror, and a popular movie monster. The first major zombie film was Halperin and Halperin’s (1932) White Zombie, which depicted a Haitian voodoo priest capturing the female protagonist as a zombie slave. Other early zombie films include: Revolt of the Zombies (1936), King of the Zombies (1941), and I Walked with a Zombie (1943). What is important to note is that the zombie of these films was not the cannibalistic creature we now know it as. These zombies were people put under a spell, the spell of voodoo and mystical tradition. In these films, the true terror is not be being killed by zombies, but of becoming a zombie oneself.
What all these films have in common is their depiction of Voodoo and Haitian culture more generally as dangerous, menacing, and superstitious. Those who study colonial history are keen to note that the messages contained in these films are less than subtle, and present stereotyped versions of Haitian culture aimed largely at satisfying a predominantly white audience. Many of these films also contain an all white cast, with several members in blackface serving as comedic relief for the more “serious” scenes.
In the 1950s, zombie films came to the American shores. At this time of Cold War anxiety, films oriented around mind control and invasion from afar resonated with audiences. Films like Invisible Invaders (1952) presented the dangers lurking nextdoor, as family, friends, and neighbors turned on one another. In this film, a mad scientist uses technology to secure power over men’s brains. In films such as these, fears of loss of individuality and loss of control over the self become predominant. This mirrors the changes of suburban America at this time, as expansion into the suburbs and the development of mass-production led to new forms of consumption and identity creation. Films like The Last Man on Earth (1964) portray the fight for individuality as Vincent Price, as the last man on earth, must fight off the onslaught of night-walking, vampire/zombie hybrids.
Also, after the devastation of the atomic age was realized in Hiroshima ad Nagasaki, new anxieties developed surrounding science and technology, the limitations of human progress, and the dangers posed by new forms of energy we did not yet fully understand. Films like Plan 9 From Outer Space (1959) root the zombie in terms of these fears, portraying the inevitable apocalypse as arising out of humanity’s own hubris. Developments in science and technology, especially the desire to control nature through new forms of energy, lead extraterrestrials to intervene to stop humanity’s inevitable acquisition of these dangerous weapons of mass destruction. The aliens resurrect the dead in order to destroy the living. In these dramatic premonitions of the future, humanity is said to be facing retribution for its sins. In the 1970s, these fears would only be magnified…
As you can see, the zombie as movie monster represents a very fluid metaphor or “artefact” (Bruns 2008) upon which our worst fears and anxieties can be grafted. Throughout time, the meaning of the zombie has changed, but so has our fears. Stay tuned next week for Part 2: Romero and the Politicized Zombie, where I will be discussing the use of the zombie as a vehicle for social criticism.

My master's research was on global participation in the Toronto Zombie Walk, and the motifs of neoliberalism embedded in the performance of zombies. And while its been a while since I've been returned to that work, I remember being struck by the differences between the zombies of global north and global south. Where our zombies focus on runaway consumption (brrrrraaaaiiiinnnns much?), the zombies of the global south are a reflection of anxieties of exploited labor abuse.

[...] Zombie) by Dave Paul Strohecker, seconds ago at 01:05 pm Below is Part 2 of a three part essay (Part 1 is available here) I will be presenting at the 2012 Southwest Texas Popular Culture Association meetings in [...]

Pss.. Frankenstein was the creator of the, um, creature - not the creature itself ;)

The monster did take his maker's last name because he considered Victor to be a sort of father to him.