Something interesting has been happening in Times Square this summer. As has been occurring for a century, the crowds gather with necks perched upward looking at all the famously illuminated billboards. But now there is a new type of buzz in the crowd: they stand together facing the same direction, cameras held high and their hands waving even higher. They are not just watching celebrities or models in this the most expensive ad-space in the world; today, they are watching themselves on the big screen.

This is all part of a new billboard for the company Forever 21 currently in use in Times Square in the heart of New York City. It struck me that this billboard is nothing short of a consumer-capitalism-happening, and started snapping photos and thinking about what this all might mean. 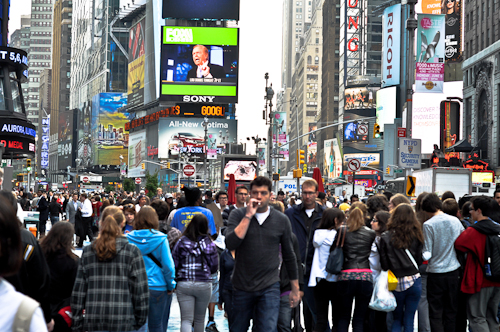 Times Square, that glittering spectacle of cabs, people, and lights in Manhattan got its name when the New York Times moved its offices there on New Year’s Eve, 1905 (first celebrated with fireworks, and soon after by dropping the famous ball). Advertising here began as painted wooden signs but quickly became one of the first areas to illuminate billboards with electronic lights. The economic boom, fueled by the stock market downtown, through the 1920’s (think: F. Scott Fitzgerald) centered Times Square as the capitol of decadence as well as high-profile corruption. Times Square saw the emergence of the dynamic scrolling “ticker” (i.e., “the zipper” installed in 1928);  made with electronic lights, this was the first signage that could produce dynamic, changing content from moment to moment; an astonishing innovation for its time.

As the city suffered catastrophic economic hardships, especially in the 1970’s, Times Square earned its new reputation as a seedy, crime-ridden area of sex shops and porno theaters. After Mayors Kotch and Giuliani “cleaned up” the city, Times Square changed shape again, emerging into the ‘safe’ Disneyfied and McDonaldized landscape of consumption that it is today. Amidst the crowds of tourists you’ll find a Planet Hollywood restaurant, M&M’s and Disney stores and, of course, a McDonald’s (and many other chain-operations). In short, Times Square is “spectacular” in the way Guy DeBord used the term. In fact, the illuminated signs that the buildings (are required to) have are actually called “spectaculars.”

What each of these epochs of advertising in Times Square have in common is that the relationship between the gaze of the crowd and the advertisements themselves was largely in one direction: the crowds saw the celebrities, models and images scientifically chosen by advertisers and marketers. The crowd was to first see, then buy. The crowd was to see but not be seen.

However, today, we are witnessing a new innovation: the glowing light of physical-space-advertising has become interactive and augmented. No longer is the media sphere largely separate from those observing it. Increasingly, we are seeing an augmented advertising that blurs the physical bodies in the crowd with the advertising media itself. 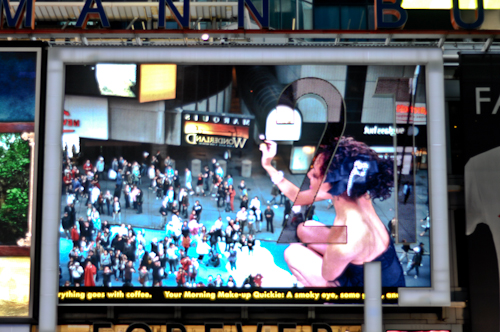 The Forever 21 billboard (pictured above) is a massive television screen that displays live video of the street below. There are various animations overlaid on the display and a pre-recorded woman interacts with still shots produced, live, of random people in the crowd. Reading this, it may not sound like that big of a deal. In person, what does seem like a big deal is how much attention the billboard gets; how excited people are. I saw one elderly couple watching with tears rolling down their cheeks. 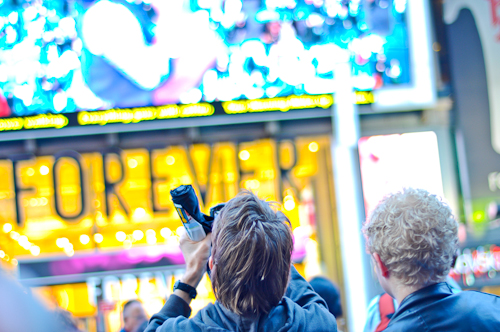 This orientation, of consumers taking pictures of themselves in a billboard that is taking a picture of them, is largely brand new (actually, Cosmopolitan did something similar in Times Square last year). Advertisers have long wanted for consumers to see themselves projected in advertisements. Today, advertisers can literally do this. And, as I witnessed, we love it.

New York City recently closed off certain areas in Times Square from car traffic to make them more pedestrian-friendly. This has come to be not so much for the purpose of allowing them to move quickly and freely, but instead to gather as crowd. They have gathered to stand still, face a single direction, and watch a sign that is watching them back. 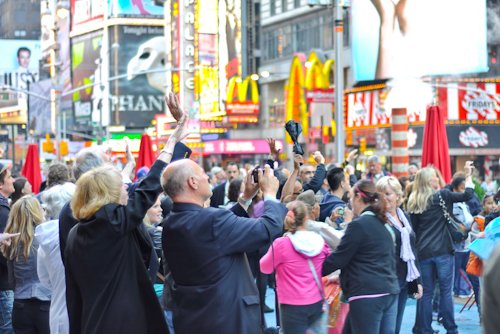 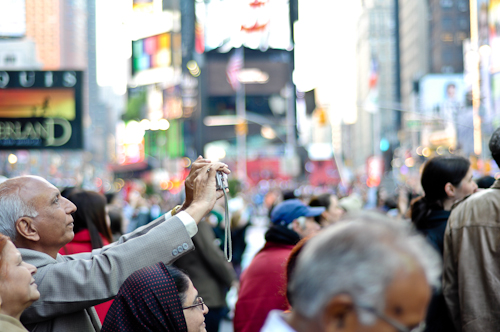 It used to be said that “having your name in lights”and to be displayed larger-than-life in Times Square demonstrated that you “made it”; that you are a star.

Today, we are all part of that “elite”; we are all mini-celebrities worthy of being documented on the big screen in Times Square. Our cultural moment is one where documentation of our lives in intimate detail, especially on social media, provides the requisite existence. This is why it is joyous for the crowd to see themselves in this place. This is the center of the universe of importance, of relevance and celebrity. Things weigh more here.

And, of course, people know this to be somewhat a ruse. The crowd knows that the camera is simply fixated anyone and everyone who stands within its wide gaze. You are not special to be on that billboard.

But it continues to work, as was strikingly demonstrated by witnessing its effect in person. People stand transfixed, in awe of the billboard. Consciously or unconsciously, we get a sense that showing up on a Times Square billboard is important. It does mean something.

I left Times Square wondering just why this trick works so effectively? 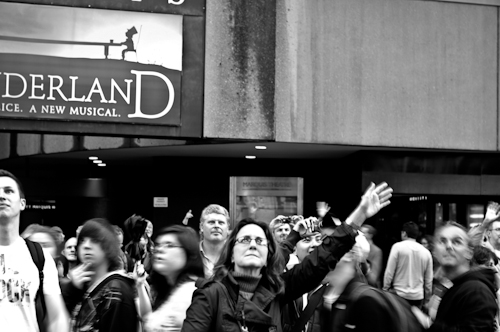 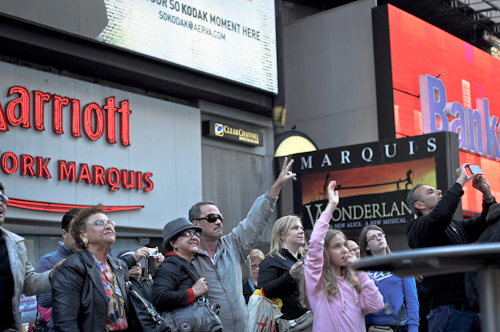 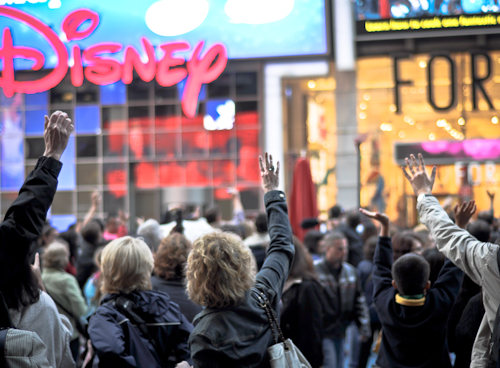 Live feed of the billboard.

Video of the billboard in action.

On a somewhat more mundane level, the migration from neon lights to massive LED displays over the ten years has been really amazing. What were fairly static displays with a few featured mechanical animation (the coca-cola straw for instance) are now wholly reprogrammable on-the-fly. Additionally, "people watching" has been a New York past time for ages so I think what you've correctly identified is a merging of the glow of the neon and the fascination of the crowd. Great post.

[...] This was originally posted at my blog Cyborgology – click here to view the original post and to re... Crowds in Times Square waving at themselves on the big screen. Photos in this post by nathan jurgenson. [...]

Nice blog. Have taken these photographs by your self??

New york has been serialized by all his billboard and it show the beauty city.