A “catfish” is someone who misrepresents themselves online. This is all you really need to know about the movie catfish. The rest is kind of hard to describe, like trying to explain the movie Inception after you just watched it one time. I don’t want to debate the authenticity of the film, because it doesn’t really matter to this discussion (read about it on the wiki). I want to talk about the film’s noteworthy use of social media and the probing questions that it raises for scholars of new technology and Web 2.0. 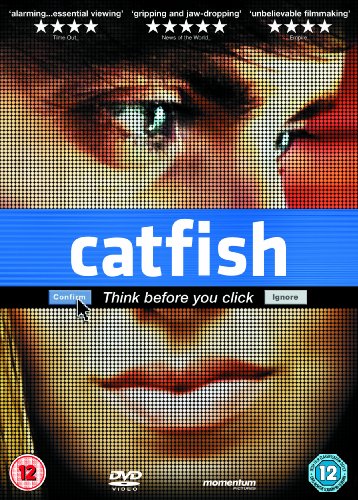 The film incorporates social media in a very integral and experiential way. The producers take a pretty postmodern approach to depict the characters and draw out the narrative of the film. Mirroring some of the techniques seen Cloverfield or the Blair Witch Project, similar pseudo-documentary mystery narratives, hand-held cameras and panning screenshots allow us to experience the characters, to develop the plot arc, and to eventually come to the realization that all is not what it seems. We experience the characters through social media, as the protagonist Nev is gradually introduced to the family of a young girl Abby.  The camera pans across grainy computer screens, as Nev clicks through the Facebook profiles of the films characters and we, by proxy “get to know” these characters. The point of this exercise is for the viewer to gradually build trust for the characters alongside the central character Nev. So in effect, the film takes the technique of Takashi Miike in Audition The film builds this trust and then quickly shatters it, at which point the trust we had for the characters is broken.As Nev makes the realization that people are not how they appear online, we the audience also learn this vital lesson.

The woman of the film, Angela, creates an entire social universe
vicariously through public content she takes from the web (She can be seen here giving an interview with 20/20). Impersonating a beautiful, young dancer named “Megan,” she befriends Nev and eventually falls in love with him, all-the-while mailing him paintings she claims her sister “Abby” painted for Nev.

On a hunch that Megan is not who she seems, Nev makes a surprise visit to her, travelling across the US to her rural town in Michigan. Upon arrival, Nev discovers that the entire social network he had been interacting with online and through the phone, including her family, friends, and children, were a complete fabrication. “Megan,” “Abby,” “Angela,” and everybody else were created by Angela Pierce, a middle-aged, shy, lonely female blogger with two handicapped children who require constant care.

The film’s producers, actors, and cameramen, Henry Joost and Ariel Schulman, appear to document the entire escapade from start to finish, beginning with Nev’s surprise package and painting from young “Abby” and culminating in their visit to Ishpeming, Michigan. But questions have been raised whether or not Joost and Schulman may have exploited Angela from the start. Film critic Kyle Buchanon rightfully questioned the authenticity of the film after viewing it during Sundance 2010. He states,

“Schulman and Joost let us listen in on Nev’s cursory calls with Angela and romantic calls with a strangely Angela-like Megan, but when Nev says months later that he’s never spoken to precocious painter Abby on the phone — and apparently never grew suspicious about that — it begs credulity. Meanwhile, to go by Angela’s own Facebook pictures, she looks even younger than her supposed daughter Megan. If the filmmakers didn’t think that was strange, then they’re truly gullible bumpkins.”

Such trends incorporate what Nathan Jurgenson has called Fakebooking, or the deliberate modification of one’s social profile in an insincere, sarcarstic, or downright false way.  However, it also raises issues of inauthenticity and “mean machinations” (Simmel, 1900) in an era of Web 2.0 technology. There are several cases of people misrepresenting themselves or baiting people into false pretenses using social networking technologies and the increased distance these technologies allow.

For instance, the popular blogger “Delacroix” just came out to her readers as a farce, after two long years and over 20,000 tumblr followers. The imposter, who is also the creator of FuckYeahTattoos.com, came out on July 1, 2011 with a formal apology from her personal blog. She had been pirating images from fitness guru Pernilla Pramberg’s personal blog and posing as her under the pseudonym “Kimber Delacroix.”

But Catfish also raises issues of intellectual property in an age of prosumption. Besides the more obvious issue of identity theft, the film makes one think about how easy it has become to steal others work online. Angela, while imitating “Megan,” sends Nev and the directors several acoustic songs as MP3 files, songs which she had pirated off YouTube and claimed as her own. These acts of theft are what initially lead the filmmakers to question the authenticity of these women in the first place, and eventually travel to Ishpeming to confront them. When so much work is collaboratively done online, who owns the rights to an encyclopedia entry that has been tweaked by dozens of different users across the globe in a collaborative online space like Wikipedia?

Finally, the film raises questions of pseudonymity in online prosumptive communities like Flickr, Tumblr, or Blogspot. Angela’s behavior is part of a growing trend of misrepresentation online, which I believe stem largely from the increased distance and anonymity such avenues of communication allow. In this way, I think Simmel’s adage about money is apt. Just as money increases the anonymity of transactions, allowing individuals to secretly purchase goods and services that would otherwise taint their image, pseudonymity allows for greater security, increased anonymity, and leads individuals to engage in “mean machinations” (Simmel, 1900) online. The misrepresentation and deception contained in the film Catfish makes this all the more clear.

For a contrary opinion, see Adrian Chen's piece on "the death of online anonymity" and the film Catfish (2010):