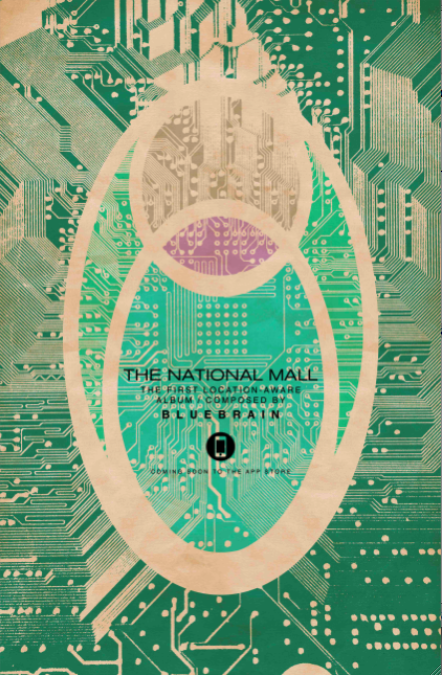 Washington D.C.-based musicians Bluebrain created an album that is actually a location-aware iPhone app called The National Mall (out today via Lujo records). Open the app while on the National Mall in Washington, DC and the music reacts to how you move about your surroundings. As reported on Wired UK,

approach a lake and a piano piece changes into a harp. Or, as you get close to the children’s merry-go-round, the wooden horses come to life and you hear sounds of real horses getting steadily louder based on your proximity.

We have previously looked at augmented reality art on this blog, such as Jon Rafman’s compelling Street View images,  Google’s Street Art View and Clement Valla’s “Postcards from Google Earth, Bridges” project. The National Mall is an augmented album, imploding digital media with your specific movements within physical space. The listener-turned-cyborg’s experience of the album comes in the form of the codetermining interaction of media and physical space.

The artists will release their next location-aware augmented albums for Brooklyn’s Prospect Park followed by another set to the length of Rt1 in California.

Rather than the previous posts mentioned here, which brought projected atoms into bits (de-localizing them), I find it interesting that this particular project does the inverse. It re-localizes a digital medium, constraining it to existing alongside particular atoms. Rather than the music taking me somewhere, I have to move myself somewhere to get the music... It strikes me as a very odd and novel thing to do.

[...] An Augmented Album The National Mall is an iPhone app/Album whose music changes depending on your location, for an augmented experience. [...]

[...] of Cyborgology is as broad as humanity and technology themselves, with story hooks ranging from augmented reality to zombification. Page back and again you’ll unearth some absolute gems to tell all your [...]

[...] a tablet interface, but it’s going to be terribly inefficient for just about everything else.An Augmented Album The National Mall is an iPhone app/Album whose music changes depending on your location, for an [...]