The Marks of War 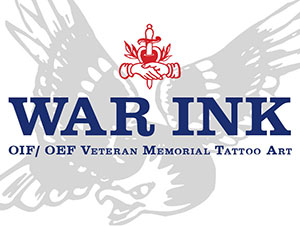 Jason Deitch, a UC-Berkeley PhD in sociology, has long been fascinated with the cultural effects of war. A veteran, Deitch has served as an advisor and activist in many capacities, but his newest project, produced in his capacity as an advisor to the California State Library, is gaining national recognition. Along with Chris Brown of the Contra Costa County Library system, the StoryCorps Military Voices Initiative, filmmaker Rebecca Murga, and photographer Johann Wolf, Deitch set out to interview as many of California’s estimated two million veterans as he could.

Well, at least the ones with tattoos. As Deitch told PBS’s NewsHour:

He went on to say that it was tough recruiting vets willing to show off their ink and talk about their experiences on the frontlines, but he hoped the resulting exhibit, “War Ink,” would help “bring veterans out of isolation by helping people back home understand them.”

Participants described the process of being photographed and recounting their stories as a way to educate others about a struggle that doesn’t end with their tour of duty.