Influence of the Blues and Foxes?

When reading my esteemed colleague (and former official, and current satellite-unofficial, advisor) Andrew Lindner’s post on the shift in buying power in English Premier League teams, my interest was sparked by one of his last propositions: “It may just turn out that 2015/16 was an outlier season and that the clubs with the deep pockets will buy their way to success again next season.” In order to adequately evaluate this claim, data from the coming seasons would be needed. However, we can assess whether the 2015-2016 break in the “buying wins” trend is due to a few influential points. In other words, do a small number of teams disproportionately account for the change in trend?

After replicating Andrew’s data manipulation and models, I looked at some influence regression diagnostics, namely Cook’s Distance. In a nutshell, Cook’s Distance measures the change in a regression coefficient when an observation is deleted. The following plot shows influence indicies for each point in the 2015-2016 model, and indicates that points 101 and 112 are statistically influential: Leicester City and Chelsea. 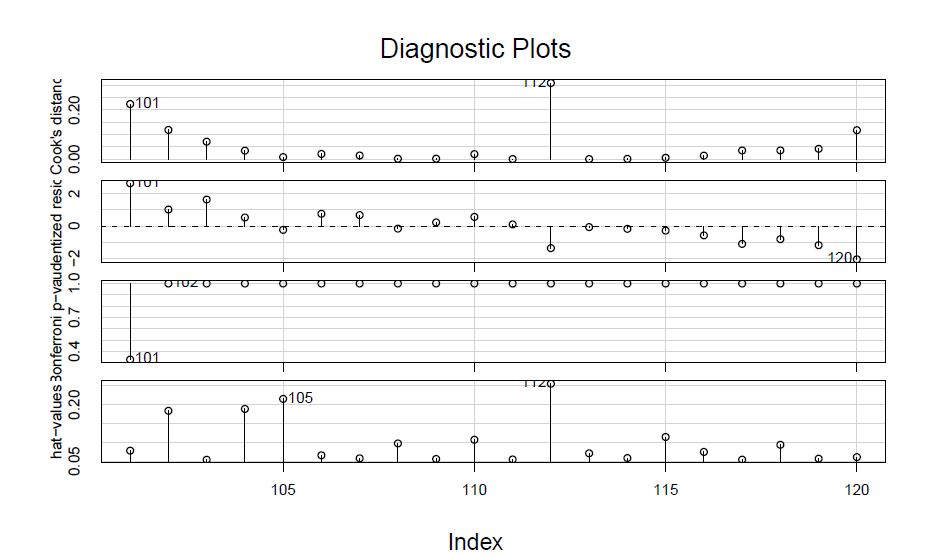 In accordance with the high Cook’s Distance values, I removed Leicester City and Chelsea from the 2015/2016 model. Although the downturn of money-flush Chelsea and the success of relatively pauperized Leicester City are influential, they in themselves do not account for the break in the trend. In terms of the trend Andrew is noting, the correlation between wage bill and points in the 2010/2011-2014/2015 seasons is .81, and the correlation (with estimated points) in the current 2015/2016 season is .43 – indeed a marked difference. But even after removing Leicester City and Chelsea, the correlation in the current season is .64. In other words, wage bill is still giving teams less point return as compared to previous seasons, even after the removal of Chelsea and Leicester City (see updated plot below). This strengthens the assertion that the diminishing power of deep pockets is an overall trend (at least for this season) as opposed to just the disproportionate influence of two wildly performing teams respective to their piggybanks. 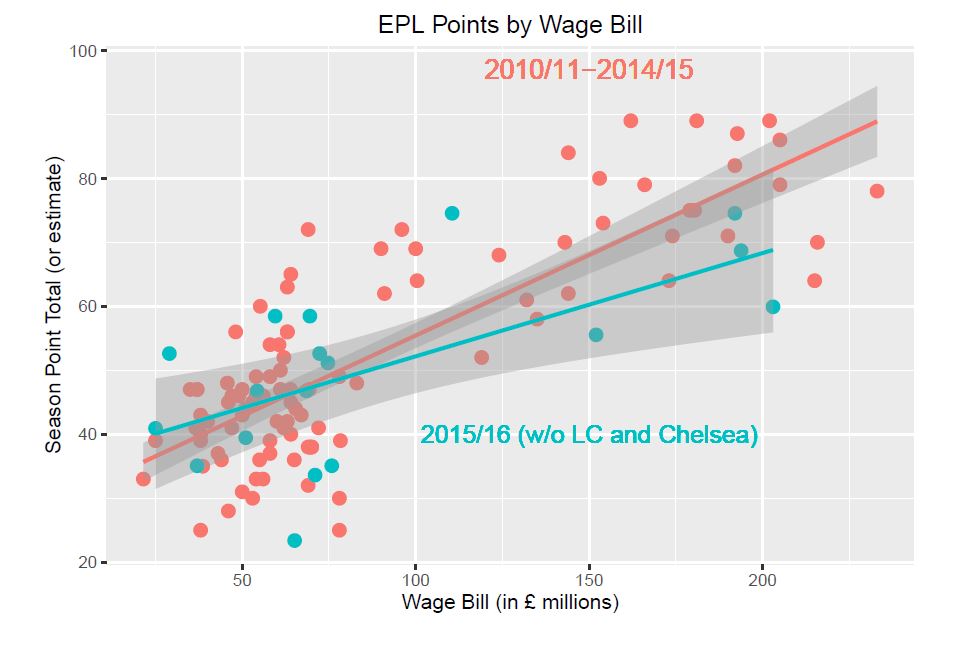