Can’t Buy Me Wins … This Season

Cross-posted at my web site.

Arsenal’s victory with a breathtaking extra time goal by Danny Welbeck this past weekend notwithstanding, Leicester City’s season has had the kind of storyline we normally only see in Hollywood movies. This isn’t a March Madness Cinderella team upsetting Duke in a one off win. Leicester is a team with a wage budget less than a quarter of the size of the league favorites. Leicester finished 14th in the English Premier League last season. Leicester’s leading scorer this year, Jamie Vardy, had 5 goals in 36 matches last season.

But this season, Leicester has had sustained success, leading the league through the first two-thirds of the season and downing major clubs like Man City. Vardy has become a hero, leading the league with 19 goals. As Sports Illustrated soccer writer, Grant Wahl, put it on Twitter,

Closest thing in US sports to what Leicester is doing? The movie Hoosiers.

But just how unusual is this season? Very. Compared to the socialist sports leagues of the United States with their strict salary caps, the EPL is the Wild West where top teams can pay players as much as their owners are willing to spend. It has led to massive inequality between clubs with four teams spending at least £100 million more in player salaries than most of the rest. Unsurprisingly, it is usually the case that clubs that pay for better talent do better.

Taking data on club wage bills and season point total from the past five years¹, I produced the figure below that charts the relationship between spending and success for the four campaigns from 2010/11-2014/15 in red (with some assistance from my Skidmore colleague, Michael Lopez, who has studied salary and wins in MLB). In a normal season, £25 million in additional wage spending is worth about 6 points (or two wins). Moreover, team simply do not join the rarefied club of 75+ points in a season without a wage bill north of £140 million. 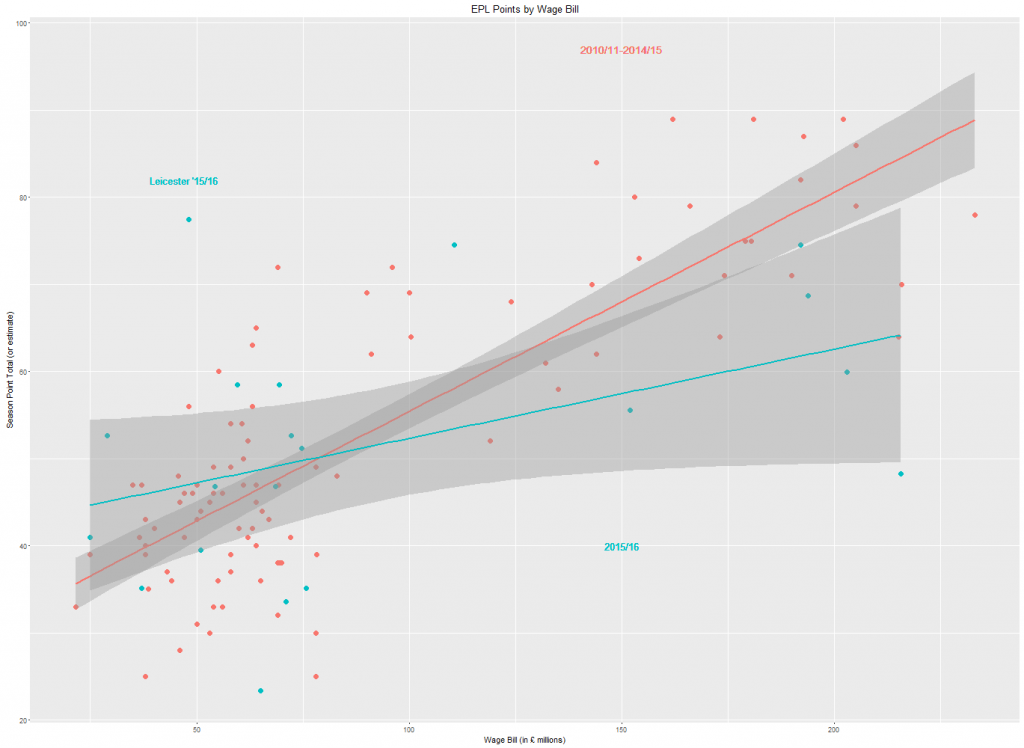 This season broke that (see the blue points). The aristocrats were deposed (well, at least Chelsea and Liverpool). Southampton and West Ham are in positions to win Champions’ League spots. As of writing, positions 5 and 14 on the table are separated by only 3 wins. This season, £25 million in additional wage spending is worth about half a win.

And, well, Leicester … as NBCSN commentator Peter Drury exclaimed during Leicester City’s victory over Manchester City, “They’re not just beating the richest club in the land! They’re rippin’ them on their own patch! Why shouldn’t they be champions?” As the figure show, Leicester of this season is an unbelievable outlier. Over the past five years, the next closest club with a wage bill under £50 million had 22 fewer points (7 wins)!

What explains the wilting effect of wages on points? It’s easy for the punditocracy to come up with individual accounts. Leicester’s success is due to its “team spirit and togetherness.” The seeds of Chelsea’s unprecedented misfortunes were visible in their low-scoring title year last season. But the truth is that even the data-equipped are grasping for answers.

It may just turn out that 2015/16 was an outlier season and that the clubs with the deep pockets will buy their way to success again next season. For now, let’s just enjoy the competitive balance and hope that Leicester can win a title for underdogs everywhere.

¹Because the current season is still underway, I estimated this season’s final point total based on current standings.