I argued that is was difficult for Mitt Romney to create positive valence moments and as such might struggle down the line. Today after his big win in Florida, he makes the unfortunate comment that he isn’t concerned with the very poor in America. I’ve already seen this circulate on Facebook and Twitter a few times. His propensity to only create negative “viral moments” hasn’t hurt him yet. Gallup has him leading his rivals in the national polls for the first time since New Hampshire but Gallup also has an intersting “intensity index” that finds Romney scores low in intensity of support for him as a candidate when compared to Gingrich. 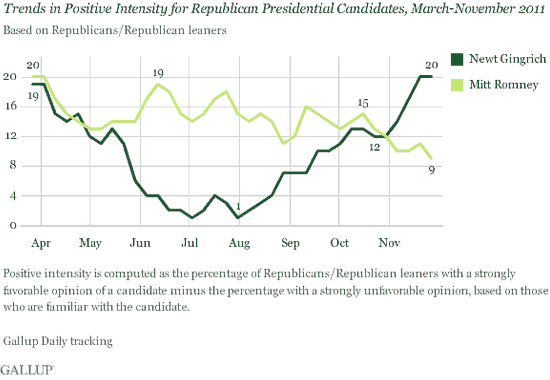 If this were all about organization and money, we’d be done talking. So I’m putting out a “high positive valence” theory that posits that Gingrich will be the nominee…. but I’m not putting any money on it 🙂