There are a few creative types on ThickCulture so I’m hoping they chime in on this one. I just saw this on Facebook {via Jennifer Lovegrove via Zoe Whittall} this rekindled my thinking about screenplays. The video explains the Bechdel Test or the Mo Movie Measure to assess female presence in films. The test is not part of a feminist manifesto or a normative stance on what makes a “good” or “correct” film, but poses the question that much of filmmaking caters to men or male-centric narratives. Here’s a list of films and how they fare on bechdeltest.com. I think I know why this is the case. It’s about formula and pigeonholing. So, if we take the parameters of the test::

one realizes that few films would pass this test, but those that do would often get stereotyped in the calculus of Hollywood decision-making that relies on formula and appealing to certain demographics in an attempt to mitigate risk. Too much female presence on screen is often deemed unchartered territory when it ventures outside of the established realm of the “chick flick”. This has gotten me thinking about my screenplays and a TV treatment I’m developing and how, with good writing, there could be much more of a female presence that doesn’t take anything away from the story. Interestingly, my TV treatment has much more of a female presence, but it mirrors a real world context and I’m more cognizant of gender in my writing of late. In any case, I find writing in more female presence, in a smart way I might add, to be an interesting creative challenge that can help freshen the story. I’m not sure I would say the same thing in 2002 when I started writing screenplays, as I think writing stories and dialogue for women back then would be much more difficult. Eight years ago, I think I’d think it’s a great idea but beyond me. Nevertheless, I think pushing the envelope here has the potential for writers to craft better stories.

While I don’t believe that only women can write screenplays that pass the Bechdel test, I think it’s illuminating how relatively few female writers there are. According to a Writers’ Guild of America 2009 report, the number of female screenwriters has languished under 20% for the past few years:: 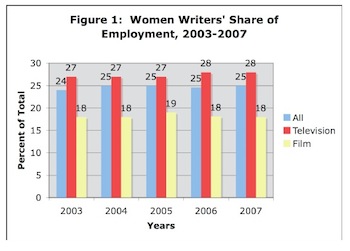 [...] The idea, it seems, is that a hackneyed movie is not hackneyed if it comes with a twist.  Based on this video describing the Bechdel Test (briefly, whether a movie has more than two named female characters, [...]