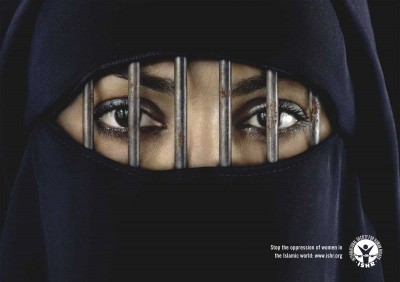 The conservative French president, Nicolas Sarkozy, has expressed concern that the burqa is subjugating women in France.  Addressing both parliamentary houses in the Palace of Versailles::

“The burka is not a sign of religion, it is a sign of subservience…It will not be welcome on the territory of the French republic.”

The BBC clarified the different types of Islamic headscarves {below}.  Sarkozy emphasized that this isn’t about disrespecting Islam and a group of cross-party French legislators are interested in examining whether women wearing the burqa is undermining French secularism and also whether womem wearing the veil are doing so voluntarily.

The French government banned the Islamic headscarf and other conspicuous religious symbols in 2004 although within the government, there is no consensus on the issue.  In the US, somehow I think that no matter how hard the polygamy and abuse angles are pushed, there won’t be any bans on FLDS garb.

Last year, the Urban Affairs minister, Fadela Amara, born in France to Algerian parents, has been a harsh critic of the burqa.  A feminist who has fought racism for decades, Amara grew up in one of the rough banlieues of Paris, knowing the often ugly intersections of race, culture, and gender.  After a 2008 court case case denying a Moroccan woman citizenship was upheld, Amara said she supported the ruling, in the hopes that it would  dissuade fanatical Islamic followers from imposing the burka on their wives.  In an interview with Le Parisien, she said::

“The burka is a prison, it’s a straitjacket”

“It is not a religious insignia but the insignia of a totalitarian political project that advocates inequality between the sexes and which is totally devoid of democracy.”

This brings up an interesting issue, since banning clothing has been associated with anti-immigration politics throughout Europe.  The fact of the matter is that if France decides to move towards a banning of the burqa, some argue this is likely to limit radical Islamic women’s freedom even more, as men may not allow them out at all.

Barring the possibility of some celebrity starting a burqa trend, i.e., secularizing it, such a ruling would be in conflict with the French concept of laïcité , a variant of the concept of the separation of church and state.  More subtle is an idea that banning the burqa does symbolic violence to the “other.”  Pierre Bourdieu notes in Distinction how subjugation and control are manifested in the everyday::

“…the social relations objectified in familiar objects, in their luxury or poverty, their ‘distinction’ or ‘vulgarity’, their ‘beauty’ or ‘ugliness’, impress themselves through bodily experiences which may be as profoundly unconscious as the quiet caress of beige carpets or the thin clamminess of tattered, garish linoleum.”

The Islamic veil has been isolated and socially categorized.  The attention given it has stigmatized it.  Ironically, within extreme Islam, it has its own symbolic baggage, particularly as it crosses national borders.  While scrutiny of the Islamic veil can foster a political agenda by conservatives and a feminist agenda, is doing so through such symbolic violence the best way to institute social change?

Niqab/Burqa:: niqab is a veil for the face that leaves the area around the eyes clear. However, it may be worn with a separate eye veil. burka is the most concealing of all Islamic veils. It covers the entire face and body, leaving just a mesh screen to see through.

Hijab:: regarded by many Muslims as a symbol of both religion and womanhood, come in a myriad of styles and colours.

Al-Amira/Shayla:: al-amira is a two-piece veil. shayla is a long, rectangular scarf popular in the Gulf region. It is wrapped around the head and tucked or pinned in place at the shoulders.

Khimar/Shador:: khimar is a long, cape-like veil that hangs down to just above the waist. It covers the hair, neck and shoulders completely, but leaves the face clear. The chador, worn by many Iranian women when outside the house, is a full-body cloak. It is often accompanied by a smaller headscarf underneath.

All veils in Canada and US should be banned.

y should it be banned??? dont U wear what u want,,, let muslim women wear what their religion wants--covering their hairs. DONT NUNS OF CHRISTIANITY COVER THEIR HAIR?????

Everything that covers the FACE should be banned everywhere - it's a matter of security. As long as the face is clear, though, veils and similar clothes should not be banned, in the name of freedom. Everybody should be free to wear whatever they like, IF it doesn't turn in a danger. My opinion.

I like seeing women under veils or chador, but I also think that in Muslim culture is a position of subservience. I think its use should be restringed for the person who wants it (me a Kardec spiritist). Just as in Muslim lands we have to be as their law, the woman here would have to use according to our laws, specifically in France, they must do as citizens of the West. I was born in southern Brazil, and has 18 years of age, I am a man, homosexual, and I believe many wrong things are done in the name of a being that many people never imagined, just say it exists, but in actually it's too complex for their minds... thanks for the opportunity!

anecdote: I saw a couple in a shopping mall (no kids around I checked), she, all covered (Niqab), both holding an ice cream in a cone with overlapping scoops. HE WAS ENJOYING HIS ICE CREAM (the bastard), she was holding it, looking LIKE AN IDIOT... I never thought of that before and I was shocked and more than anything feeling like screaming at them... I did not...
I have French and Australian nationalities, I lived for more than 20 y in Paris and saw huge changes, in 10 y Australia has dramatically changed too both regarding Arabs and Islam.
In fact is Arab, not Muslim, they have been assimilated. I am completely against it unless they stay in their own country where it is traditional, acceptable???
In Rome do like the Romans do
or stay in your country.

I feel sorry for Muslim woman because they are subjected to more hate and violence than being made to wear a burka. I see these women outside in the blistering heat wrapped up like a human burrito while their husbands run around in shorts, short sleave shirts and sandles. Muslim religion is religion who's foundation is built of violence. Women are raped then punished for having premarital sex.. I have muslim neighbors with small male children and even the children were taught that its ok to scream and yell at their mother and this poor woman has to serve them like a slave. I understand that no religion is perfect because they are man made and we aren't perfect but the Muslim religion Is the worst of the bunch!

Why a christian nun cover their hair? .. poor creature!! she SHOULD uncover her head and live her life. Huh this is the freedom !!!

Heh LIBERALS, GOD "Allah" created you and this world, and give you rules to live. DON'T mess with it.

Muslim women wear veil for God "Allah", but live for theirselves, and save their Beauty to their OWN men, In side their own houses and a way from strangers.

Muslim women know what the pleasures of life are, in the light of what Allah chose to them. Veil is RESPECTFUL to women not violence against them.

Muslim women know their God "Allah" and know why they cover their body and faces. WE don't need your APPROVAL to take it or not. SO BANNED YOUR OWN BUSINESS

DON'T EVER TAKE HALF THE TRUTH AND THROW THE OTHER HALF .. YOU WILL BE HOPELESS