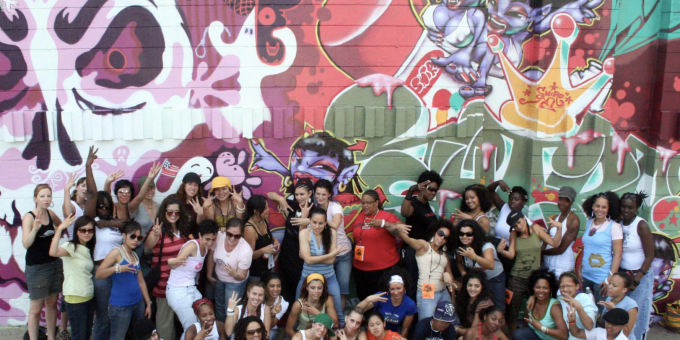 It was a deep freeze in January 2002 when I moved to Minneapolis with my then five-year-old daughter, Tiana. I arrived as a Ph.D. student in the University of Minnesota’s Department of Gender, Women, and Sexuality Studies with the heart of a feminist, tired from the sexism, homophobia and misogyny of what I call my former #RapLife. I worked interviewing rappers and artists for magazines, online platforms, and a clothing company while dreaming of making a DVD magazine of my own (I know, it was the early 2000s, and that seemed cool!). While working for a former “urban+skater+hip hop” publication that was converted to a “Men’s magazine” my #RapLife ended. During a meeting to review the proofs of a photo shoot with the best woman snowboarder in the world wearing only a skimpy fur bikini while contorted around a Husky dog I said, “Great, but can we see hot chicks at least do cool shit?” I quit the job, applied to the University of Minnesota, and got nervous because my only visit to the Midwest was to Chicago. But I went, filled with hope that a Ph.D. would give me a lens to understand the trauma I had endured.

I grew up in Upstate New York. My mother was Puerto Rican and my father was Russian Jewish. In our mixed race and mixed-faith family, we all sort of did our own thing. My oldest brothers went to Hebrew school and listened to white rock music, my middle brother played guitar in a jam band and loved every genre of music, and I went to Catholic school on Sundays.

I grew up with friends who were white, Italian, Jewish, Puerto Rican, Dominican, Black and just about everything else – New York is truly a melting pot like that. My mother spoke Spanish but cooked hamburgers, hot dogs and spaghetti because she felt it would be best to assimilate. I didn’t grow up speaking Spanish but learned broken Spanglish and classroom Spanish.

I lost both of my parents to cancer at 23. They were diagnosed three weeks apart and died two months apart, when my daughter was a few months old. My daughter is Puerto Rican, Russian Jewish, Jamaican, Syrian, Indian, Chinese, and Cuban. When I enrolled her in kindergarten in Minneapolis, most of the other kids and the teachers were white, but their views seemed liberal and they were very welcoming. Her experiences in school were mostly positive, but her K-12 teachers were all white, until she studied African and African-American Studies in college.

While I was a doctoral student in feminist studies at the University of Minnesota, other Latina scholars and I formed the “Kitchen Table Collective.” These sisters helped me deal with a department full of power struggles, both hidden and overt. I once saw a faculty member of color throw a book at a white faculty member! The ivory tower is not always the warm and supportive place I thought it would be. It can be full of rage. In the Kitchen Table Collective we wrote our dissertations, gave each other support, and brunched. That is how we survived.

In addition to handling my formal classroom studies I made documentaries. While filming different documentary projects in and around Minneapolis I learned of tensions between Black students and African students who were from Somalia, Ethiopia and Eritrea. These students did not consider themselves Black, and certainly not Black Americans – they were Africans. There were many tensions, but arts projects helped to defuse them. A friend who is a rapper and community organizer, for example, led a workshop on painting self-portraits. He had each participant design a piece that they drafted on paper and then (legally) outlined on a wall. They then picked up aerosol cans and painted. I loved filming the participants’ beautiful multicolored hands, streaked with a rainbow of paint. I realized that in Minneapolis the arts and creative expression outlets were an important part of building community, partnerships and understanding.

My off-campus activities also included the Twin Cities hip hop community. I first met Desdamona, a white rapper from Iowa, at a film festival in Austin. She gave me her card and I never forgot her name – like Shakespeare, but hip hop. On my first visit to the University of Minnesota I saw a flyer on a telephone pole that advertised a poetry reading she was hosting near campus. I went to it, and was surprised when she called out my name, recognizing me many years after our first meeting. From there our project of organizing women in the hip hop community was on.

Desdamona introduced me to the arts non-profit Intermedia Arts, where she hosted an on-going women in hip hop event. It was there that I met Maria Isa, a Puerto Rican Minnesotan who waves her flag for SotaRico. The community was filled with Muslim b-girls, white graffiti artists, Black poets, Native artists, indigenous photographers, Asian and Pacific Islander playwrights, immigrants, and truly just about everyone. Not to say that there weren’t tensions and issues in our little hip hop utopia, because there were, but together we put on the biggest event of women in hip hop to date: “B-Girl Be: A Celebration of Women in Hip Hop.”

After earning an M.A. in Women’s Studies and a Ph.D. in Feminist Studies I moved to the Deep South to become an Assistant Professor at the University of Alabama. I also continued to make documentaries, ran the video crew at the Tuscaloosa Amphitheater, and co-directed an arts organization, all while earning tenure and promotion to Associate Professor. Moving to Tuscaloosa made the racial tensions in Minneapolis seem less substantial. The weight of history in Alabama is still very heavy and ever-present in daily life. I could write a book about that. Faulkner’s quote still rings true: in the Deep South, “The past is never dead. It’s not even past.”

But for now I’ll close with a note about my home, because everywhere we have lived has helped to raise up and frame our racialized experiences. When people ask my kids and me where we are from, I say New York, my daughter says Los Angeles, and my son says Minneapolis. Joseph has beautiful memories of Minnesota and great pride in having been born a Minnesotan. But our family has survived many kinds of trauma, from microaggressions to too many instances of overt racism, like being called the N-word in public schools across this country. What we’ve learned on this journey is that our Midwest home of Minneapolis is just like most of America right now: beautiful, very broken, and full of pockets of hope.

Rachel Raimist is a lecturer in the Department of Film & Theatre, San José State University. She co-edited Home Girls Make Some Noise: Hip-Hop Feminist Anthology, and is a member of the scholar/activist Crunk Feminist Collective. Raimist is also an award-winning filmmaker who most recently directed episodes of the TV series The Republic of Sarah, Nancy Drew, and Roswell, New Mexico.

Rachel Raimist is a lecturer in the Department of Film & Theatre, San José State University. She co-edited Home Girls Make Some Noise: Hip-Hop Feminist Anthology, and is a member of the scholar/activist Crunk Feminist Collective. Raimist is also an award-winning filmmaker who most recently directed episodes of the TV series The Republic of Sarah, Nancy Drew, and Roswell, New Mexico.