The Simon Wiesenthal Center just released “iReport: Online Terror + Hate: The First Decade” (pdf) analyzing cyberhate and extremist websites from the last decade. In addition to analysis and pictures of the websites analyzed (I posted some below), the report contains discussions of “cyberhate” and online terrorism, and includes an action plan. See also the NYTimes coverage of the report.

While I would argue that the Internet is no different in terms of composition than the peoples and organizations that make up the Internet (i.e. the Internet reflects and re-creates the racial, ethnic, gender and class divisions found elsewhere), what I think is particularly interesting about this report is how newer Internet technologies (Web 2.0 technologies like social networking sites, collective gaming, blogs, folksonomies) are shaping how these kinds of web content are created and distributed. Just as Web 2.0 technology tailors the information you see about your friends on social networking sites like Facebook, Web 2.0 technology is also making it possible for extremist groups to bring tailored content to targeted groups of interested individuals.

This report has a lot of content that would be perfect for class discussions on the Internet, online activism, how Web 2.0 technology shapes this kind of content, the visibility/invisibility of race, class, gender and other inequalities online, as well as issues of web freedom and monitoring online content. How could this content be regulated and/or censored? Should it be?

Some highlights from the report (p. 3):

• The Internet’s unprecedented global reach and scope combined with the difficulty in monitoring and tracing communications make the Internet a prime tool for extremists and terrorists.

• The Simon Wiesenthal Center has been monitoring these developments for nearly two decades through our Digital Terrorism and Hate Project. Our findings reveal that as the Internet has grown, the escalation of extremist sites has kept pace in number and in technological sophistication.

• In April 1995, the first extremist website went online: Today, the Wiesenthal Center’s Digital Terror and Hate 2.0 identifies some 8,000 problematic hate and terrorist websites and other internet postings. This represents a 30% increase over last year.

• Every aspect of the Internet is being used by extremists of every ilk to repackage old hatred, demean the ‘Enemy’, to raise funds, and since 9/11, recruit and train Jihadist terrorists. Of special concern is the use of the Internet used by the Iranian regime to justify terrorism and spread its influence throughout South America.

• Internet-based hate has inspired some of the most violent hate crimes in America. In this election year, the Internet continues to be used to demean and threaten African Americans, Jews, immigrants, gays and virtually every religious denomination. 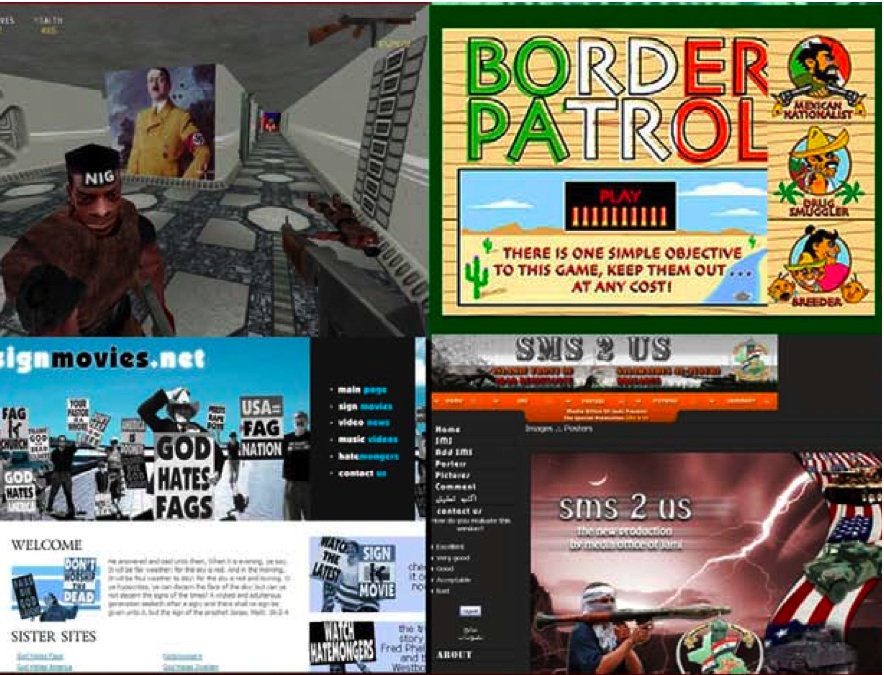 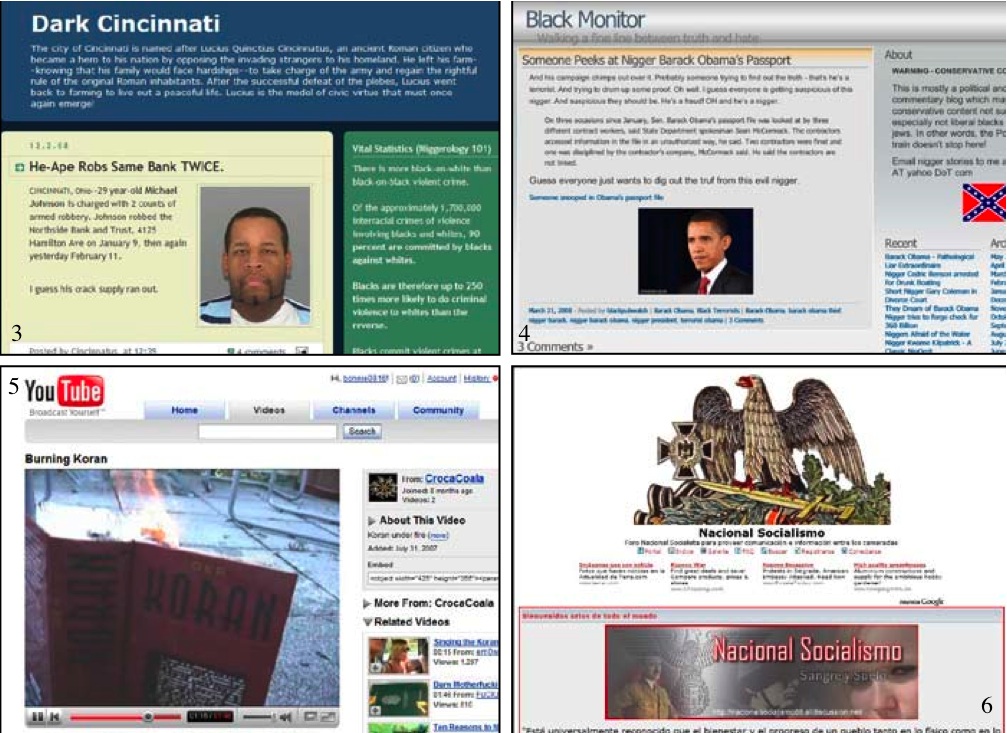 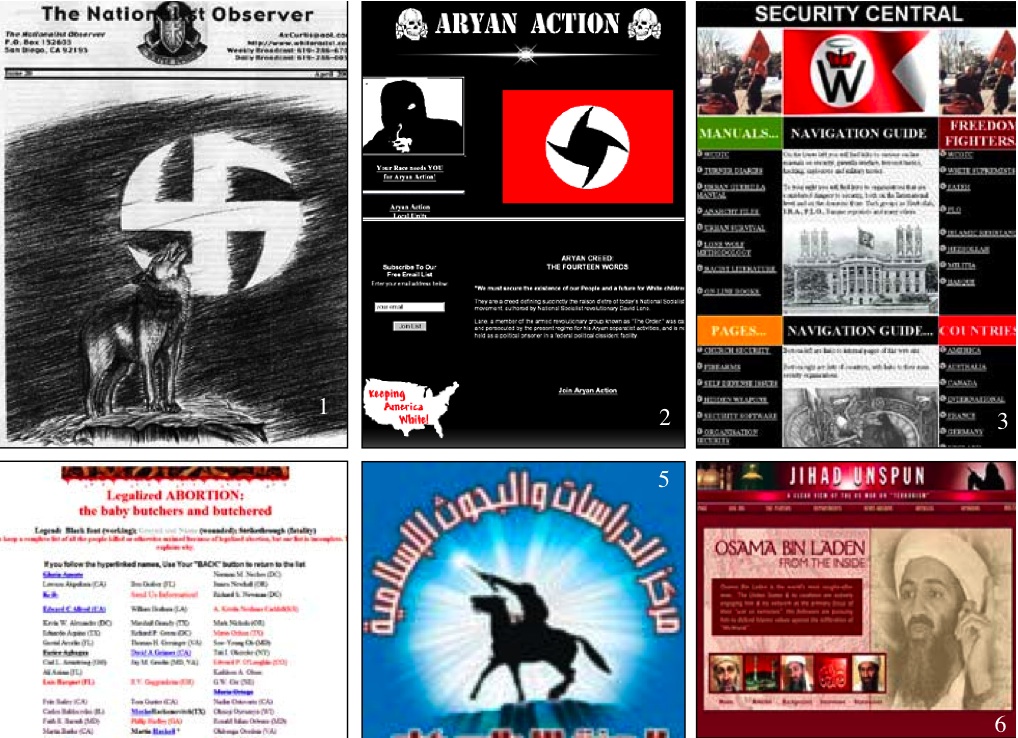 I borrowed this image years ago from Myra M. F. Thanks Myra! 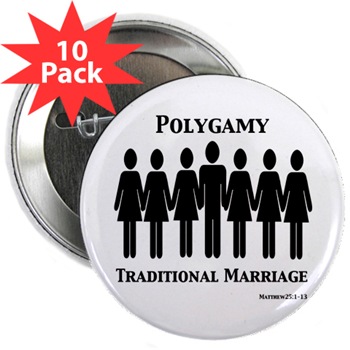 “Godhatesfags.com” T-Shirts for the Kiddies 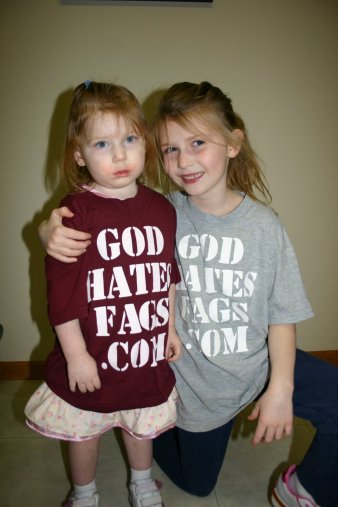 In case you weren’t aware, godhatesfags.com is a website run by Fred Phelps, leader of Westboro Baptist Church in Topeka, Kansas. They’re the ones who have anti-gay protests around the U.S., including at some points showing up at the funerals of gay men, and have moved on to a general “God hates America” theme, due to all our depravity. He makes Jeremiah Wright (Obama’s pastor) look like a teddy bear–at least he was just saying God ought to damn America.

These t-shirts depress me more than anything I have seen in a really long time.

A completely unrelated Kansas story: When I was living there, in a small town, I discovered that my vet was the head of the Board of Education and was leading the anti-evolution efforts at the time (this was before voters elected a new Board and got rid of a lot of the anti-evolution people).

Anyway, thanks to Larry H. from The Daily Mirror for this photo (found here). I guess.

What are Moms and Dads Made of?

The text on the website for this men’s t-shirt:

What goes into being a Dad? You’ll find 100% leadership, 100% guidance, 100% sacrifice, and 24/7 dedication. These Christian Dad Facts and more are printed on this inspirational tribute. A loving gift, comfy 100% cotton tee is machine washable and made in the USA.

The “ingredients” on the t-shirt include dedication, love, wisdom, and leadership. The “serving size” is “2 helpings of advice.” 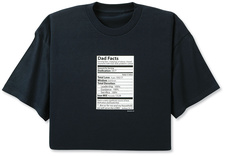 Ever wonder what makes up a Mom? Well, there’s 100% sugar, 100% sacrifice, 100% caring, and 24/7 comforting. These Christian Mom Facts and more are printed on this inspirational tribute. A sweet gift, comfy 100% cotton tee is machine washable and made in the USA.

The “ingredients” include comforting, love, wisdom, total compassion, sugar, sacrifice, and caring. The “serving size” is 5 hugs per day. 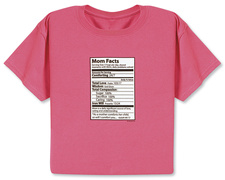 Then there is this child’s t-shirt that says “Daddy did my hair”: 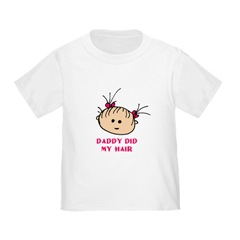 As Jennifer points out,

I think it brings up a lot of unspoken norms about parental responsibility and ability. First, it indicates that it is the norm for mommy to do the daughter’s hair, but out of the norm for daddy to do it–we don’t see t-shirts saying mommy did my hair, right? (I searched and didn’t find any.) Because that’s just taken for granted. But if Dad does it, it is something to be noticed (and maybe he even gets praised for doing something that is a routine job for mom). Second, the implication is that dads cannot do their daughter’s hair “correctly.” So there is an expectation that if dad does the hair it will be a mess. Think about what this says about men–we certainly think they are capable of doing all kinds of very complex tasks at work–but we don’t think they can comb hair or put in a ponytail??? Third, I think the shirt serves the purpose of justifying the girl’s looks for the mom. In other words, no moms want others to think they would do such a poor job on the girl’s hair. They want others to know that it looks like this because daddy did it. Moms feel pressure to have their kids look great (and behave well) all the time, no matter how hectic the day is. And, of course, the shirt is for a girl, not a boy. No one really cares how a boy’s hair looks.

Gender Politics In Life And Time

This famous Life Magazine cover from 1971 trumpeted the feminist movement: 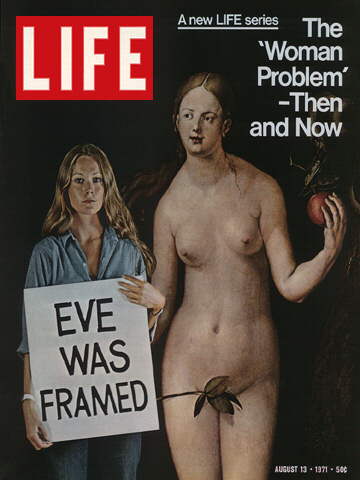 Six years later, in 1977, Time Magazine reminded us that gender difference (and inequality?) was genetic and, thus, out of our control: 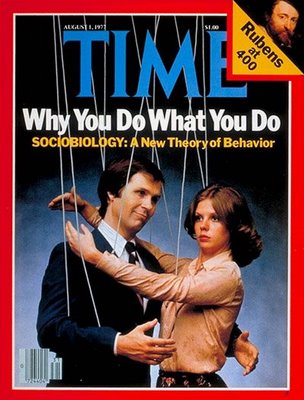 And don’t miss the famous 1978 Hustler cover that appeared the very next year!

Click here and scroll down for a map showing the number and % of Muslims in various European countries. From NPR.

[youtube]http://www.youtube.com/watch?v=sbcmPe0z3Sc[/youtube] While this video is more activist-y than scholarly, I think it might be useful as a way to demonstrate that our taken-for-granted categories (whether they be based on religion, race, ethnicity, gender or otherwise) are falsely homogeneous.

Modest Clothing Websites (All for Women)

These could be useful in all kinds of ways–for instance, is it necessarily oppressive to dress “modestly”? Is there a difference in the tone of these websites (i.e., providing choice vs. “clothing your father would approve of”)? Do we view the website aimed at Muslim women differently than the others?