I LOVE this image. It’s a fashion spread. 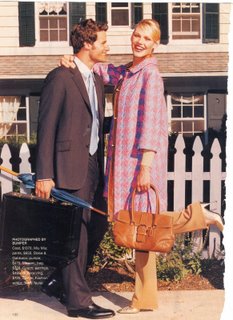 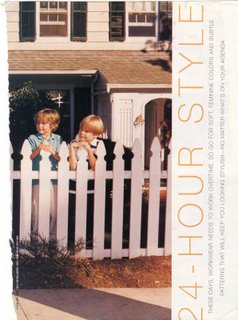 Question:
Who’s taking care of those little tow-headed boys behind the white picket fence when both mommy and daddy go to work?

I use this picture to talk about the way in which middle- and upper-class women are “getting equal” with men by transferring their caretaking responsibilities to less privileged women… who are, as in this ad, invisible.

Some Videos for Class

“Pornography: The Secret History of Civilization” (2005) is useful for showing that non-procreational sex and sexual enjoyment are not “modern,” and that using and enjoying sexually explicit images isn’t new, either. I liked the first two episodes in the series, especially the second one, which shows how many explicit images there are in religious buildings and texts from the Middle Ages in Europe. Be warned, you need to watch these before showing them to be sure you can get away with it with your audience–for many students, even the artwork and religious drawings would probably lead to outrage today (which can be an interesting discussion in and of itself).

“Fenceline” addresses institutional racism, environmental pollution, and activism by looking at residents in a town in Louisiana and the divisions that arise between blacks and whites about the possibility of toxic waste contamination. It could be useful for discussing environmental issues or looking at why two groups in the same community could come to such different conclusions about what is going on. 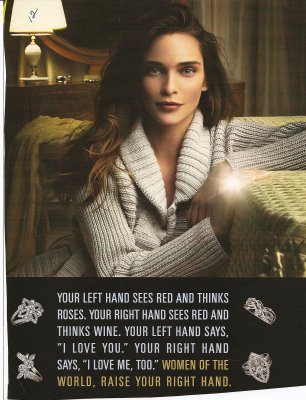 More excerpts from this ad campaign: 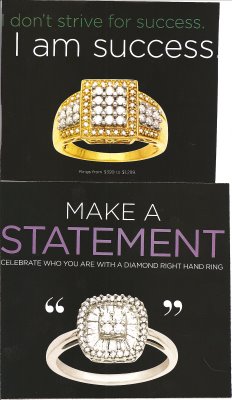 The top one says “I don’t strive for success, I am success.” The bottom one says “Celebrate who you are with a diamond right hand ring.”

This is a motel/tourist trap/amusement park in South Carolina called Pedroland that is based on the stereotype of the dumb, lazy Mexican.

Here’s the link. This is what it says on the front page:

The Commodification of Sex and Love

The Great Happiness Space is an amazing full-length documentary (available in full online) about “host” clubs in Japan. These clubs service women, mostly sex workers, who buy time with men (hosts, who also get a cut of all the money the women spend on alcohol) who pretend like they love them. The women establish long-term relationships with their hosts, spend sometimes 10s of thousands of dollars in a night, all to have the feeling that someone cares for them. So they earn tons of money giving sex to men and then they turn around and give that money back to men who give them affection (and sometimes sex). The hosts make between 10,000 and 50,000 a month. Also a great study in cross-cultural gender differences.