I was absolutely devastated to hear about Anthony Bourdain’s passing.

I always saw Bourdain as more than just a celebrity chef or TV host. I saw him as one of us, a sociologist of sorts, someone deeply invested in understanding and teaching about culture and community. He had a gift for teaching us about social worlds beyond our own, and making these worlds accessible. In many ways, his work accomplished what so often we as sociologists strive to do.

I first read Bourdain’s memoir, Kitchen Confidential, at the age of twenty. The gritty memoir is its own ethnography of sorts, detailing the stories, experiences, and personalities working behind the sweltering heat of the kitchen line. At the time I was struggling as a first-generation, blue-collar student suddenly immersed in one of the wealthiest college campuses in the United States. Between August and May of each academic year, I attended classes with the children of CEOs and world leaders, yet come June I returned to the kitchens of a country club in western New York, quite literally serving alumni of my college. I remember reading the book thinking – though I knew it wasn’t academic sociology – “wait, you can write about these things?” These social worlds? These stories we otherwise overlook and ignore? I walked into my advisor’s office soon after, convinced I too would write such in-depth narratives about food-related subcultures. “Well,” he agreed, “you could research something like food culture or alternative food movements.” Within six months of that conversation, I had successfully secured my first research fellowship and taken on my first sociology project.

Like his writing, Bourdain’s television shows taught his audience something new about our relationships to food. Each episode of A Cook’s Tour, No Reservations, and Parts Unknown, went beyond the scope of a typical celebrity chef show. He never featured the World’s Biggest Hamburger, nor did he ever critique foods as “bizarre” or “strange.” Instead, he focused on what food meant to people across the globe. Food, he taught us, and the pride attached to it, are universal.

Rather than projecting narratives or misappropriating words, he let people speak for themselves. He strived to show the way things really are and to treat people with the utmost dignity, yet was careful never to glamorize or romanticize poverty, struggle, or difference.  In one of my favorite episodes of No Reservations, Bourdain takes us through Peru, openly critiquing celebrities who have glorified the nation as a place to find peace and spiritual enlightenment:

Sting and all his buddies come down here, they’re going on and on and on and on about preserving traditional culture, right? Because that’s what we’re talking about here. But what we’re also talking about here is poverty. [It’s] backbreaking work. Isn’t it kind of patronizing to say ‘oh they’re happier, they live a simpler life closer to the soil.’ Maybe so, but it’s also a pretty hard, scrabbling, unglamorous life when you get down to it.

My parents and I met Anthony Bourdain in 2009 at a bar in Buffalo where he was filming an episode of No Reservations. My father was thrilled to tell Bourdain how much he loved the episode featuring his homeland of Colombia. It was perhaps one of the first times in my father’s 38-years in the United States that he felt like American television portrayed Colombia in a positive light, showing the beauty, resilience, and complex history of the nation rather than the images of drug wars and violence present elsewhere in depictions of the country. That night in that dive bar, Bourdain graciously spoke with my dad about how beautiful he found the country and its people. Both the episode and their conversation filled by father with immense pride, ultimately restoring some of the dignity that had been repeatedly stripped of him through years of indignant stereotypes about his home. 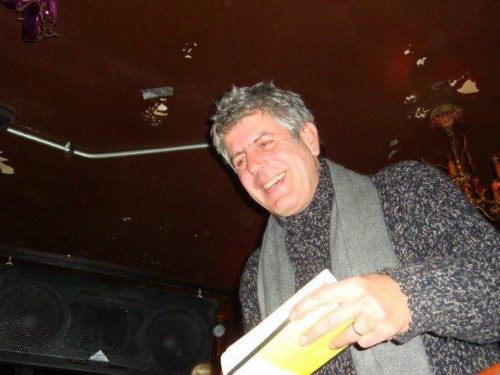 In the end, isn’t that what many of us sociologists are trying to do? Honor people’s stories without misusing, mistreating, or misrepresenting them?

In retrospect, maybe Bourdain influenced my path towards sociology. At the very least, he created a bridge between what I knew – food service – and what I wanted to know – the rest of the world. In our classrooms we strive to teach our students how to make these connections. Bourdain made them for us with ease, dignity, and humility.

Caty Taborda-Whitt is a Ford fellow and sociology PhD candidate at the University of Minnesota. Her research interests include embodiment, health, culture, and inequalities.

Beautifully written with heart and authenticity. Thank you for sharing how Anthony Bourdain inspired you and so many others.

My wife and I met Anthony at a VIP meet-and-greet in Nashville in 2015. I described to him those same observations, suggesting that much of what he does is Sociological. He seemed genuinely impressed and interested to know more. We have been grieving heavily these past two days. Thank you for your article.

What a great piece - thanks

In reading this I appreciate that there are sociologist who recognize that food contribute to an individuals culture as well. Rather than looking at foods from other cultures Bourdain looked at it as something that was "good" or "disgusting", he looked at it as what it meant to people across the world. This view on food has opened up my eyes to understanding that food is different everywhere and you can't just look at someone from another region food as disgusting. I also understand where the father comes from in saying that he appreciates the chef for not talking about Columbia as violent place he looks at it in positive light which most chef shows do not do. They tend to be bias and a little ignorant to people's culture.

How sometimes you want to go for a walk with friends to watch a movie. But time for study does not allow me to do all this in full measure, so I turned to assignment writing service and now I have a lot of time

To convert your stuff to Mp3 go on the given link.

To convert your stuff to Mp3 go on the given link. listentoyoutube

Go and get your favourit comics at one place. tg comics