Despite the fact that women played a key role in the development of modern technology, the digital domain is a disproportionately male space. Recent stories about the politics of GamerGate, “tech bros” in Silicon Valley, and resistance to diversity routinely surface despite efforts of companies such as Google to clean up their act by firing reactionary male employees.

The big tech story of the past year is unquestionably cryptocurrencies such as Bitcoin. So it’s a good time to look at how cryptos replicate the gender politics of digital spaces and where they might complicate them.

Crypto holders are not evenly divided between men and women. One recent survey shows that 71% of Bitcoin holders are male. The first challenge for women is simply their representation within the crypto space.

There are various efforts on the part of individual women to address the imbalance. For example, Stacy Herbert, co-host of The Keiser Report, has recently been discussing the possibility of a women’s crypto conference noting, “I know so so many really smart women in the space but you go to these events and it’s panels of all the same guys again and again.” Technology commentator Alexia Tsotsis recently tweeted, “Women, consider crypto. Otherwise the men are going to get all the wealth, again.”

Clearly, the macho nature of the crypto community can feel exclusionary to women. Recently Bloomberg reported on a Bitcoin conference in Miami that invited attendees to an after-hours networking event held in a strip club. As one female attendee noted, “There was a message being sent to women, that, ‘OK, this isn’t really your place … this is where the boys roll.’”

The image of women as presented by altcoins (cryptocurrencies other than Bitcoin) is also telling. One can buy into TittieCoin or BigBoobsCoin, which need no further explanation. There is also an altcoin designed to resist this tendency, Women Coin: “Women coin will become the ultimate business coin for women. We all know that this altcoin market is mainly operated by men, just like the entire world. We want to stop this.”

The male dominance of cryptos suggests it is a space that celebrates normative masculinity. Certain celebrity endorsements of crypto projects have added to this mood, such as heavyweight boxer Floyd Mayweather, actor Steven Seagal and rapper Ghostface Killah. Crypto evangelist John McAfee routinely posts comments and pictures concerning guns, hookers and drugs. Reactionary responses to feminism can also be found: for example, patriarchal revivalist website Return of Kings published an article claiming, “Bitcoin proves that that ‘glass ceiling’ keeping women down is a myth.” Homophobia also occurs: when leading Bitcoin advocate Andreas Antonopoulos announced he was making a donation to the LGBTQ-focused Lambda Legal he received an array of homophobic comments.

However, it would be wrong to assume the masculinity promoted in the crypto space is monolithic. In particular, it is possible to identify a division between Bitcoin and altcoin holders. Consider the following image: 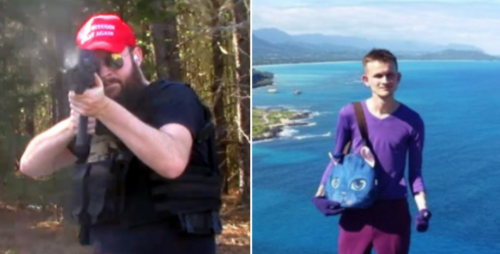 This image was tweeted with the caption “Bitcoin and Ethereum community can’t be anymore different.” On the left we have a MAGA hat-wearing, gun-toting Bitcoin holder; on the right the supposedly effeminate Vitalik Buterin, co-founder of the blockchain platform Ethereum. The longer you spend reading user-generated content in the crypto space, the more you get the sense that Bitcoin is “for men” while altcoins are framed as for snowflakes and SJWs.

There is an exception to this Bitcoin/altcoin gendered distinction: privacy coins such as Monero and Zcash appear to be deemed acceptably manly. Perhaps it is a coincidence that such altcoins are favored by Julian Assange, who has his own checkered history with gender politics ranging from his famed “masculinity test” through to the recent quips about feminists reported by The Intercept.

In conclusion, it is not surprising that the crypto space appears to be predominantly male and even outright resistant to fair representations of women. Certainly, it is not too dramatic to state that Bitcoin has a hyper-masculine culture, but Bitcoin does not represent the whole crypto space, and as both altcoins and other blockchain-based services become more diverse it is likely that so too will its representations of gender.

Joseph Gelfer is a researcher of men and masculinities. His books include Numen, Old Men: Contemporary Masculine Spiritualities and The Problem of Patriarchy and Masculinities in a Global Era. He is currently developing a new model for understanding masculinity, The Five Stages of Masculinity.

Maybe women are just smart enough to stay away.