Valentine’s Day is upon us, but in a world of hookups and breakups many people are concerned about the state of romance. Where do Americans actually stand on sex and relationships? We took a look at some trends from the General Social Survey. They highlight an important point: while Americans are more accepting of things like divorce and premarital sex, that doesn’t necessarily mean that both are running rampant in society.

For example, since the mid 1970s, Americans have become much more accepting of sex before marriage. Today more than half of respondents say it isn’t wrong at all. 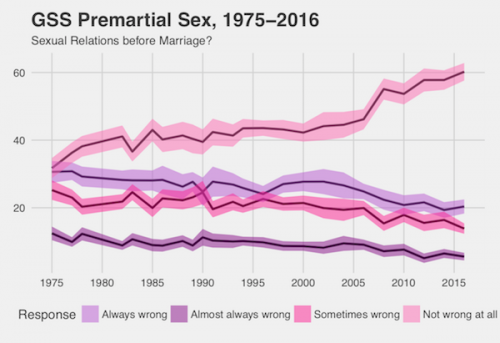 However, these attitudes don’t necessarily mean people are having more sex. Younger Americans today actually report having no sexual partners more frequently than people of the same age in earlier surveys. 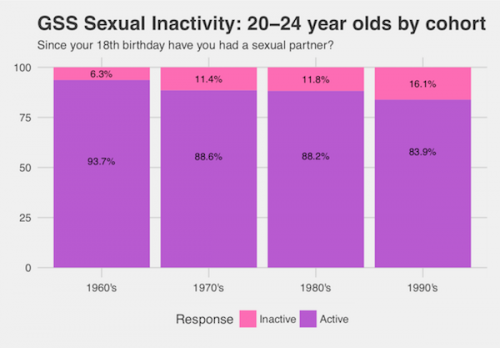 And what about marriage? Americans are more accepting of divorce now, with more saying a divorce should be easier to obtain. 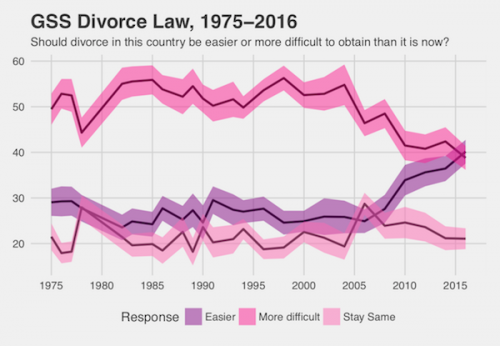 But again, this doesn’t necessarily mean everyone is flying the coop. While self-reported divorce rates had been on the rise since the mid 1970s, they have largely leveled off in recent years. 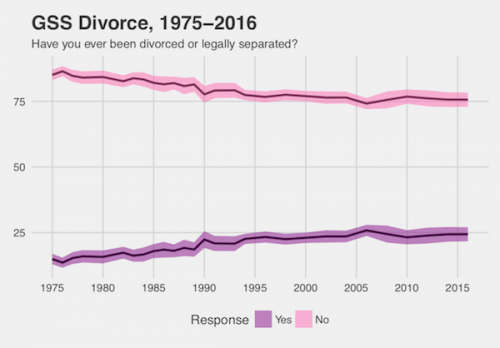 It is important to remember that for core social practices like love and marriage, we are extra susceptible to moral panics when faced with social change. These trends show how changes in attitudes don’t always line up with changes in behavior, and they remind us that sometimes we can save the drama for the rom-coms.

Ryan Larson is a graduate student from the Department of Sociology, University of Minnesota – Twin Cities. He studies crime, punishment, and quantitative methodology. He is a member of the Graduate Editorial Board of The Society Pages, and his work has appeared in Poetics, Contexts, and Sociological Perspectives.

Evan Stewart is a Ph.D. candidate in sociology at the University of Minnesota. You can follow him on Twitter.

This is all really intersting info and stats but have you ever tried managing an operational business? https://franchisingusamagazine.com/latest-news/how-manage-operational-business Maybe a business in general? Then you should use the site i've added and go check it out, because you will learn a lot about that topic!

This is all really intersting info and stats but have you ever tried managing an operational business? https://franchisingusamagazine.com/latest-news/how-manage-operational-business Maybe a business in general? Then you should use the site i've added and go check it out, because you will learn a lot about that topic!

Hello, Thanks for sharing this trending feeling of love with us. Nowadays everyone love to play online games but didn't know how to choose the best site. If you are also one of the view here. And you can find the best site regarding this.