Cosmopolitan is a highly influential fashion magazine, the 15th highest circulating magazine in the United States. Its covers matter, seen by 18 million readers a month and many more at checkout and newspaper stands across the country. Who are their covers representing, and have they become more racially diverse?

I did a content analysis of Cosmo covers, randomly selecting a sample of 214 between 1975 and 2014. Since the 1970s and 2010s have fewer years represented, about half the number of covers were examined during these decades as compared to the 1980s, 1990s, and 2000s. Following sociologist Mary Nell Trautner and Erin Hatton’s study of Rolling Stone covers, I coded each image for race. Since the cover models are well-known, I could double check race codes with accessible biographical information about them.

Overall, only 8% of the covers featured a person of color, including eight Hispanic women, four African-American women, four Middle Eastern women, and one Asian woman. The figure below shows that representation did increase over time. Among the 1970s, 1980s, and 1990s covers together, just 3% represented minorities, while the 2000s and 2010s covers together pictured minorities 16% of the time. 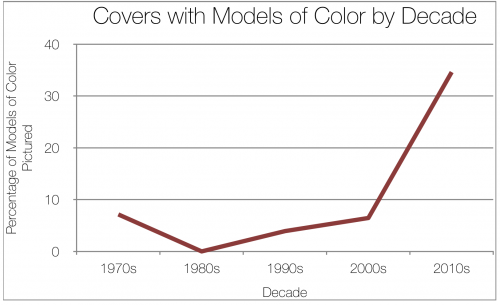 What accounted for the increase? I posit that it had less to do with an interest in diversifying Cosmo’s cover models, and more to do with a shift in focus. In the late 1990s, Cosmo began using celebrities and pop culture icons on their covers instead of models, a trend which continues today. It was in this same time span that minority representation had the largest increase.

This fits Mavrody’s (2014) study that there are lower numbers of models of color in the industry, at about 19%, and there is no action being taken to change this representation. What may be changing, however, is the representation of minorities in the entertainment industry. Movie and television stars shown on magazine covers in the most recent few decades include many more people of color than were seen when strictly models were on the covers.

Despite little change in the modeling industry, the entertainment industry has begun to work toward more equality in representation. In television, while there are roles that have been written just for people of color, there has also been a trend of mandating the inclusion of minorities. It seems as though this industry knows their audience and what they desire, and they are actively trying to diversify all shows, not just those that solely represent minorities and the minority experience. This work toward inclusion would bring about more fame for minority actors and actresses, which would explain their higher representation in the media, as well.

Alyssa Scull graduated from The College of New Jersey with a BA in Sociology. She is currently a MSW student at Columbia University, focusing on family, youth, and children in the practice and programming track.

[…] sociologist pulled 200+ Cosmo covers from 1975  to 2014. She found, “Overall, only 8% of the covers featured a p…, including eight Hispanic women, four African-American women, four Middle Eastern women, and one […]