A new study tackles the media landscape building up to the election. The lead investigator, Rob Faris, runs a center at Harvard that specializes in the internet and society. He and his co-authors asked what role partisanship and disinformation might have played in the 2016 U.S. election. The study looked at links between internet news sites and also the behavior of Twitter and Facebook users, so it paints a picture of how news and opinion is being produced by media conglomerates and also how individuals are using and sharing this information.

They found severe ideological polarization, something we’ve known for some time, but also asymmetry in how media production and consumption works on either side. That is, journalists and readers on the left are behaving differently from those on the right.

The right is more insular and more partisan than the left: conservatives consume less neutral and “other side” news than liberals do and their outlets are more aggressively partisan. Breitbart News now sits neatly at the center. Measured by inlinks, it’s as influential as FOX News and, on social media, substantially more. Here’s the  network map for Twitter: 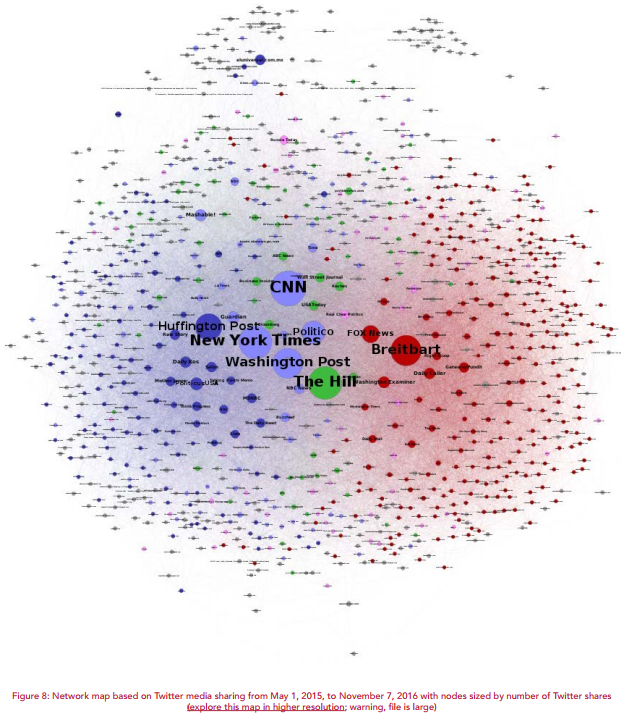 Breitbart’s centrality on the right is a symptom of how extreme the Republican base has become. Breitbart’s Executive Chairman, Steve Bannon — former White House Chief Strategist — calls it “home of the alt-right,” a group that shows “extreme” bias against racial minorities and other out-groups.

The insularity and lack of interest in balanced reporting made right-leaning readers susceptible to fake stories. Faris and his colleagues write:

There is insularity and partisanship on the left as well, but it is mediated by commitments to traditional journalistic norms — e.g., covering “both sides” — and so, on the whole, the left got more balance in their media diet and less “fake news” because they were more friendly to fact checkers.

The interest in balance, however, perhaps wasn’t entirely good. Faris and his co-authors found that the right exploited the left’s journalistic principles, pushing left-leaning and neutral media outlets to cover negative stories about Clinton by claiming that not doing so was biased. Centrist media outlets responded with coverage, but didn’t ask the same of the right (it is possible this shaming tactic wouldn’t have worked the other way).

The take home message is: During the 2016 election season, right-leaning media consumers got rabid, un-fact checked, and sometimes false anti-Clinton and pro-Trump material and little else, while left-leaning media consumers got relatively balanced coverage of Clinton: both good stories and bad ones, but more bad ones than they would have gotten (for better or worse) if the right hadn’t been yanking their chain about being “fair.”

We should be worried about how polarization, “fake news,” horse-race journalism, and infotainment are influencing the ability of voters to gather meaningful information with which to make voting decisions, but the asymmetry between the left and the right media sphere — particularly how it makes the right vulnerable to propagandists and the left vulnerable to ideological bullying by the right — should leave us even more worried. These are powerful forces, held up both by the institutions and the individuals, that are dramatically skewing election coverage, undermining democracy, and throwing elections, and governance itself, to the right.

Judging by the media outlets referenced, I suspect these results are purely an artifact of Americans' peculiar definition of "the left".

so the biggest right news place is just a conspiracy thing

[…] •The different media spheres of the right and the left — and how they’re throwing elections to the Republicans – thesocietypages.org/socimages/2017/09/28/the-different-media-spheres-of-the-right-and-the-left-and-h… […]

ts awesome feeling at the using this article because here hearts free online mobile connections have no need to take any knowledge about the fire fox.

WritePaperFor.Me can help you with the most challenging assignments. Just visit their site and order your papers. Read the full explanation on site.

Awesome blog post, I have learned much more from this blog post, however this is absolutely an excellent blog since I would love to come here again.

Categorizing such a narrow spectrum where there are no communists nor even socialists as "left" must be one of those "american exceptionalisms", like calling american rugby (where 99% of the time the ball is in the players' hands) "football" and football (where 99% of the time the ball is in the players' feet) "soccer"; or, more significantly, taking over the whole continent's name, America, given by Waldseemüller to the areas discovered for the non americans (native) in the XVth, for your single country, scorning the majority of the inhabitants of America. Isn't it? xD
For the rest of the world, US politics categorize from right-center and far right. But I guess that if you keep calling an electoral system designed to wipe out from institutions any other political party but the bigger two, a "democracy" it's ok to keep calling neoliberal, neoimperialist, proconsumerism Democrat party " the left" and social-democrat Green Party "far left"
Ah! "America" and its "exceptionalisms"... xDD

Never knew it was really this intriguing.

football" and football (where 99% of the time the ball is in the players' feet) "soccer"; or, more significantly, taking over the whole continent's name, America, given by Waldseemüller to the areas discovered for the nonamericans (native) in the XVth, for your single country, scorning the majority of the inhabitants of America. Isn't it?

football" and football (where 99% of the time the ball is in the players' feet) "soccer"; or, more significantly, taking over the whole continent's name, America, given by Waldseemüller to the areas.

Thanks a lot for this wonderful information with me. I have been looking for best writing services to help me with some of my wrtiting tasks.

Thanks a lot for this wonderful information with me. I have been looking for best writing services to help me with some of my wrtiting tasks.

I'm curious to see the role partisanship and disinformation might have played in the 2020 U.S. election as well. Good info. - Salt Free Water Softener Team

I just go through your blog. It's really amazing by the content you're providing and waiting for the next post.

Thanks for taking the time to discuss that, I feel strongly about this and so really like getting to know more on this kind of field. Do you mind updating your blog post with additional insight? It should be really useful for all of us.
darlinginthefranxxhoodies

Brockahmpton merch give us quality of shirts, hoodies and shoes in lowest price.get fast shipping.
brockhamptonmerch

What better way to pay homage to your favourite artist than with our unique collection of soft, premium Lil Peep streetwear, which includes Hellboy-themed sweaters and hoodies, pink camo sweatshirts in Lil Peep's favorite style, and contemporary black and white apparel. Choose from our Lil Peep sweaters at (https://lilpeepmerch.net/product-category/croptop/) and comfy sweatpants for a look that won't let you down all day, every day, or our Lil Peep crop tops and cosy shorts to improve your loungewear game and relax out in style.

If you’re trying Mud Wtr for the first time, take a tablespoon of mud powder and put it into your favorite mug. Then pour in some boiling hot water and give it a good blend. By good blend, I mean a real good blend (a wild one maybe). For extra taste, you can add anything you like.

Low price mowers are dull, consume more time, and require multiple mowing for a single yard. However, quality mowers are expensive but have the best maneuverability and engine service. That is why we have covered the list of lawn mowers that may not cost $1500 but they are close! Best Riding Lawn Mowers

This is an excellent blog post, I've learned much more from it, but I'd love to visit again since this is a wonderful website. youngboy shoes

This is a very nice blog and learned more knowledge to read this post thanks for sharing this informative post.
I feel extremely cheerful to have seen your post. I found the most beautiful and fascinating one. I am really extremely glad to visit your post.
Great website you have got here. Keep up the good work and thanks for sharing your blog site it really help a lot.
I read this article. I think You put a great deal of exertion to make this article.

I feel extremely cheerful to have seen your post. I found the most beautiful and fascinating one. I am really extremely glad to visit your post.

Great website you have got here. Keep up the good work and thanks for sharing your blog site it really helps a lot.liluzivertshop

Drake merch Official Store For Drake Merch Hoodie,shirts,Sweatshirts & Get purchase High Quality Products. Get Fast Shipping All around The Globe.