What does the slur “cosmopolitan” mean?

At the end of last week’s press briefing, Acosta asked about the Trump administration’s new proposals on immigration – reducing the total number of green cards by half and giving preference to people who are more skilled and people who speak English well.

ACOSTA:   The Statue of Liberty has always been a beacon of hope to the world for people to send their people to this country. They’re not always going to speak English.. . . Are we just going to bring in people from Great Britain and Australia?

MILLER: I have to say, I am shocked at your statement that you think that only people from Great Britain and Australia would know English. It reveals your cosmopolitan bias to a shocking degree.

Cosmopolitan? Acosta’s question suggests the exact opposite – provinicialism. A worldly and sophisticated person would know that countries in Asia and Africa have English as their national or dominant language and that people all over the world learn English as a second language. Only a rube would think that English proficiency was limited to Great Britain and Australia.

What did Miller mean by cosmopolitan? The question sent me back to the article that put “cosmopolitan” into the sociological lexicon – Alvin Gouldner’s 1957 “Cosmopolitans and Locals.”

Gouldner was writing about people in organizations. Miller is concerned with politics. The common element here is loyalty. Miller, along with Steve Bannon, engineered Trump’s “America first” doctrine, and by “cosmopolitans” he seems to mean people who are not putting America first. On immigration, people like Acosta are thinking about what might be good for an uneducated but hard-working Guatemalan, when instead they should be thinking only about what’s good for the US.

Jeff Greenfield put it this way at Politico: “It’s a way of branding people or movements that are unmoored to the traditions and beliefs of a nation, and identify more with like-minded people regardless of their nationality.”

The alt-Right has been using cosmopolitan for a while now, and perhaps it was Miller’s familiarity with White nationalist discourse that made the word so available as a put-down of Acosta even though Acosta’s question seemed based on the kind of ignorance about the world that is much respected over on the right.

Like “America first,” “cosmopolitan” has a history of holding hands with anti-Semitism. In Stalin’s Russia, the phrase “rootless cosmopolitan” was a synonym for Jew, and he murdered quite a few of them. In the US today, the antipathy to “cosmopolitan” embodies this same fear of rootlessness and the same dislike of Jews. Here is one website’s take on yesterday’s press briefing: 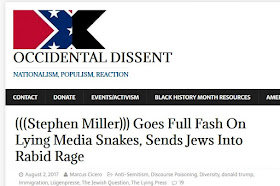 The twist here is that Acosta, the alleged cosmopolitan, is not Jewish, but Miller is. (The alt-Right uses the triple parentheses around a name to designate a Jew.) I don’t know how Miller resolves the dissonance other than to claim that he has never had anything to do with White nationalists (a claim that is probably false).  For the anti-Semites, the website has this:

While not a Jew himself, Acosta is the end result of the education and programming pushed by the Rootless Cosmopolitans wherever they dwell – even Stalin grew wise to them near the end of his life.

So Acosta cosmopolitanism came from being educated by Jews.

Miller and other Jews must surely understand the overtones of the term. And finally, let’s throw in a good word for Stalin: an anti-Semitic Russian autocrat – what’s not to like?

"Cosmopolitan" in this sense as an anti-Semitic slur for Jews is much older than Stalin. George Bernard Shaw publicly referred to Max Nordau as a "cosmopolitan Jew" in 1907, and Nordau shot back that "cosmopolitan" was "the worn out missile of anti-Semitism." So it was "worn out" over a hundred years ago, although it has been revived over and over again since.

Very interesting, thanks for the clarification regarding cosmopolitanism. I started taking a course in sociology and we are just studying this topic. But the first time I came across this term on web site was when I was researching about loyalty. In these essays were talked about this type of people as cosmopolitans, because their trait is that they are not at all inherent in loyalty.

When I studied at the university, I was faced with writing various scientific and research papers. I did not want to spend money and decided to write the work myself. I learned a lot from the blog https://www.etxt.biz/subscribes/correctly-capitalizing-your-titles/.