Human beings are prone to a cognitive bias called the Law of the Instrument. It’s the tendency to see everything as being malleable according to whatever tool you’re used to using. In other words, if you have a hammer, suddenly all the world’s problems look like nails to you.

Objects humans encounter, then, aren’t simply useful to them, or instrumental; they are transformative: they change our view of the world. Hammers do. And so do guns. “You are different with a gun in your hand,” wrote the philosopher Bruno Latour, “the gun is different with you holding it. You are another subject because you hold the gun; the gun is another object because it has entered into a relationship with you.”

In that case, what is the effect of transferring military grade equipment to police officers?

In 1996, the federal government passed a law giving the military permission to donate excess equipment to local police departments. Starting in 1998, millions of dollars worth of equipment was transferred each year. Then, after 9/11, there was a huge increase in transfers. In 2014, they amounted to the equivalent of 796.8 million dollars. 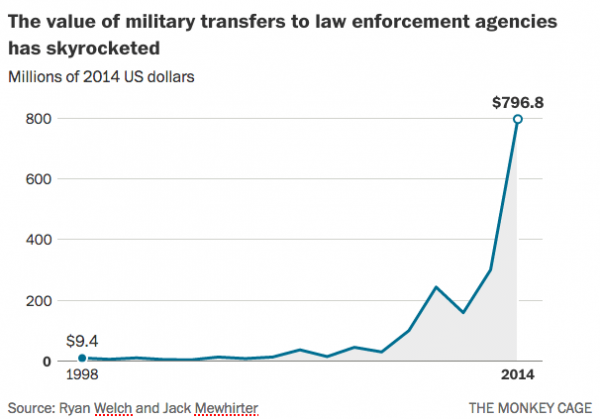 Those concerned about police violence worried that police officers in possession of military equipment would be more likely to use violence against civilians, and new research suggests that they’re right.

Political scientist Casey Delehanty and his colleagues compared the number of civilians killed by police with the monetary value of transferred military equipment across 455 counties in four states. Controlling for other factors (e.g., race, poverty, drug use), they found that killings rose along with increasing transfers. In the case of the county that received the largest transfer of military equipment, killings more than doubled.

Delehanty and his colleagues controlled for the possibility that they were pointing the causal arrow the wrong way by looking at the killings of dogs by police. Police forces wouldn’t receive military equipment transfers in response to an increase in violence by dogs, but if the police were becoming more violent as a response to having military equipment, we might expect more dogs to die. And they did.

The Bipartisan Militarization Of The US Federal Budget | Reports from the Economic Front — October 2, 2017

[…] For example, ever escalating military budgets fund ever new and more deadly weapons of destruction, and much of the outdated equipment is sold to police departments, contributing to the militarization of our police and the growing use of force on domestic opponents of administration policies, the poor, and communities of color.  As Lisa Wade explains: […]

Hello, the tools that will allow you to master the projections of the map are well written article, and also wanted to add about the well-made, durable and withstand the harshness of snow, rain, dirt and everything else you may encounter while traveling. Then you need reliable nebo flashlight review