Race, femininity, and benign nature in a vintage tobacco ad

In Race, Ethnicity, and Sexuality, Joane Nagel looks at how these characteristics are used to create new national identities and frame colonial expansion. In particular, White female sexuality, presented as modest and appropriate, was often contrasted with the sexuality of colonized women, who were often depicted as promiscuous or immodest.

This 1860s advertisement for Peter Lorillard Snuff & Tobacco illustrates these differences. According to Toby and Will Musgrave, writing in An Empire of Plants, the ad drew on a purported Huron legend of a beautiful white spirit bringing them tobacco. 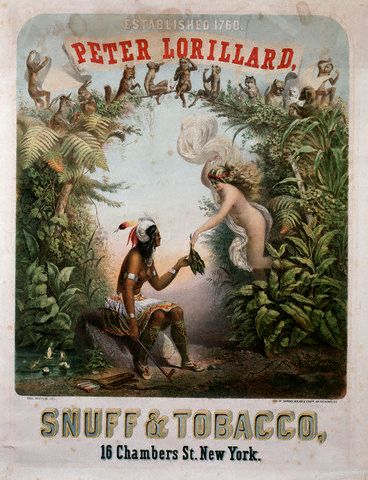 There are a few interesting things going on here. We have the association of femininity with a benign nature: the women are surrounded by various animals (monkeys, a fox and a rabbit, among others) who appear to pose no threat to the women or to one another. The background is lush and productive.

Racialized hierarchies are embedded in the personification of the “white spirit” as a White woman, descending from above to provide a precious gift to Native Americans, similar to imagery drawing on the idea of the “white man’s burden.”

And as often occurred (particularly as we entered the Victorian Era), there was a willingness to put non-White women’s bodies more obviously on display than the bodies of White women. The White woman above is actually less clothed than the American Indian woman, yet her arm and the white cloth are strategically placed to hide her breasts and crotch. On the other hand, the Native American woman’s breasts are fully displayed.

So, the ad provides a nice illustration of the personification of nations with women’s bodies, essentialized as close to nature, but arranged hierarchically according to race and perceived purity.

To me, the most ludicrous thing about this ad is that the White (presumably European) woman is giving tobacco to the Native American woman when in fact, tobacco was a thoroughly American plant that Native Americans introduced to Europeans.

Don't you think that the "willingness to put non-white bodies more on display" is a result of different dress codes of Europeans and people living in warmer climates? I'm no expert on Native Americans, but in a lot of places in Africa people didn't wear much (both men and women) because it was not practical given the weather and lifestyle. It was the Christian missionaries who did all they could to force people to wear European clothing... but in many places naked breasts were normal and not erotic in any way. So sometimes such a picture may be just realism. Would it be better if they dressed her in European or other clothing that had nothing to do with her culture? Seems it's bad either way.

Hey - this is an important clarification: the legend (as reported in An Empire of Plants) - didn't describe the "beautiful spirit" as white: the artist just chose to depict the spirit as white.

T - I thought it was a funny way of summing up many of the cultural reasons why images of women are used in this way. Which are different from the reasons images of men are used as symbols. I didn't realize it would somehow come off as "absolutist". But... whatever?

I think its a really interesting piece of work, but if I were doing the interpretation I'd guess the reason the spirit was personified as a woman was because it's characterized in legend as "beautiful," not gentle. This wouldn't explain why the other person in the scene is female and not male, but I'd put that as a toss-up to traditional iconography: to have a naked white female and naked indigenous male would be too sexually suggestive, as the pairing was frequently used in that period to promote the idea "the lusty savage." By making both figures female, the potential sexuality of the characters towards one another is neutralized and both are rendered inert objects for the (presumably male) viewer to look at. Even the animals seem more representative of wealth/abundance or the spirit's connection to nature rather than gentility(the fox and what appears to be monkey being more renowned for mischieviousness than cuteness); the only real icon of benign nature I see is the peace pipe in the native american woman's hand. Hence, for me at least, male gaze trumps benign femininity. But that's just me.

Wearing Secret Identity Suit for women is common because they feel more comfortable in this suit. It is a natural process that a person wears such a thing that he likes as students can visit https://forums.autodesk.com/t5/installation-licensing/autocad-mobile-student-version/td-p/8521153 to get tips for autocad mobile version. I appreciate this article because it tells us about comfortable suits for women.