Did Donald Trump’s campaign and election cry havoc and unleash the dogs of racism?

Last June, hauling out Sykes and Matza’s concept of “neutralization,” I argued that Trump’s constant denigration of “political correctness” allowed his supporters to neutralize norms against racism. If the denigration of political correctness means that the people who condemn racism are wrong or bad, then what they are condemning must be OK. The logic might not be impeccable, but it works. I argued that I wasn’t sure that Trump had caused an increase in racist attitudes, but he gave people a license to express those attitudes.

Aziz Ansari made a similar point on Saturday Night Live  the day after the inauguration. (Apologies if you have to wait through an ad.)

Ansari’s version is much better than mine, and it reached a slightly larger audience. But there’s another important difference. I was talking about the message Trump supporters took from Trump himself before the election. Ansari is talking about the message they got from the electorate. The election changed their perceptions of the norms about expressing anti-immigrant views.

It’s as though minds of half the country had been clouded by “pluralistic ignorance.” That’s the scenario where each person thinks X but assumes that everyone else thinks Y, so everyone keeps their true ideas to themselves. Then something happens that reveals those previously hidden preferences, and suddenly everyone feels liberated. From the Trump supporters’ perspective, Trump was Dorothy throwing a bucket of water to dissolve the Wicked Witch of Political Correctness, and now all the Munchkins were free to express their feelings about Mexicans and Muslims (and perhaps others).

The 20% increase in hate crimes after the election certainly suggests that racists felt liberated by the election. Unfortunately, because of the uncontrolled variables and the small sample size of just one candidate winning one election, this bit of evidence is hardly conclusive.

But we now have some experimental evidence on the topic. In the two weeks before the election, three economists surveyed Mechanical Turkers in eight very Red states. The MTurkers were asked, in addition to other on-topic questions, if they would authorize the economists to make a donation on their behalf to a strongly anti-immigrant group, FAIR.  Mturkers were told, “The founder of FAIR is John Tanton, author of `The Immigration Invasion’ who wrote ‘I’ve come to the point of view that for European-American society and culture to persist requires a European-American majority, and a clear one at that.’”

For half the MTurkers, the donation question included this:

Note: just like any other answer to this survey, also your donation decision will be completely anonymous. No one, not even the researchers, will be able to match your decision to your name. [emphasis in original]

The other half were told:

Important: in order to ensure the quality of the data collected, a member of the research team might personally contact you to verify your answers to the next question and the following ones. [emphasis in original]

In addition, some of the people were told that Trump was certain to win their state. Others were given no information.

The results strongly support the idea that norms – or at least people’s perceptions of the norms – make a big difference. People who thought their choice would be public were much less likely to make the anti-immigrant donation – 34% vs. 54%. But that difference held true only for people who were not told how popular Trump was in their state. Among the people who were told basically, “Trump is a sure thing to win your state,” knowing that their donation would be public (i.e., known to the surveyors) made no difference in their willingness to donate.

If the researchers had stopped there, they would have been able to say

Thanks the results of the election, though, they didn’t have to stop there. The gave the researchers a natural experiment to find out if the norms – or at least perceptions of the norms – had changed. Had Trump’s victory caused the scales of pluralistic ignorance to fall from the eyes of these Red-state Turkers?

The answer was yes. The election had the same effect as did the information about Trump support in the person’s state. It obliterated the difference between the public and private conditions. 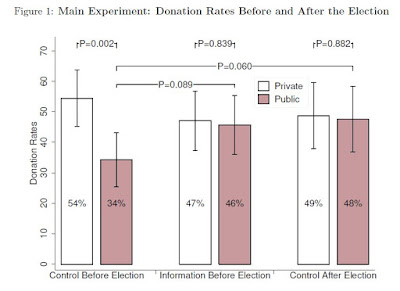 To people who were reluctant to let their agreement with FAIR be known, Trump’s victory said, “It’s OK. You can come out of the closet. You’re among friends, and there are more of us than you thought.”

I wonder if the "choice" feels as follows:

I wonder if anti-immigrant attitudes are a balm to the cognitive dissonance of at once blaming people who are poor for their poverty, and also recognizing one's own economic situation vis a vis perceived "haves". Etc. etc.

Yes and I noticed this is equally a failing of "the left". For instance with the LGBT the public voice they have is so prominent and loud that they would have many believe that most people think for instance that it is okay for a transexual "woman" to use the ladies room with women and or girls inside. The reality of course is that most strongly oppose this even many leftists or democrats such as my own parents. I think a bigger problem then Trump's win then is that "the left"relies too heavily on “pluralistic ignorance" to push their agendas instead of actually arguing and persuading the public on whatever policy (yes I realize this is easier said then done) be it the trans bathroom bills, gay marriage, or amnesty for all undocumented immigrants. While it seems "the right" has the opposite problem where they fall prey to it while at the same time lacking the ability, or media presence, to employ the strategy themselves.