Flashback Friday, in honor of Kathrine Switzer running the Boston marathon 50 years after she was physically removed from the race because it was Men Only.

The first Olympic marathon was held in 1896. It was open to men only and was won by a Greek named Spyridon Louis. A woman named Melpomene snuck onto the marathon route. She finished an hour and a half behind Louis, but beat plenty of men who ran slower or dropped out.

Women snuck onto marathon courses from that point forward. Resistance to their participation was strong and, I believe, reflects men’s often unconscious fear that women might in fact be their equals. Why else would they so vociferously object to women’s participation? If women are, indeed, so weak and inferior, what’s to fear from their running alongside men?

Illustrating what seems to be a degree of panic above and beyond an imperative to follow the rules, the two photos  below show the response to Syracuse University Katherine Switzer’s running the man-only Boston marathon in 1967 (Switzer registered for the marathon using her initials). After two miles, race officials realized one of their runners was a girl. Their response? To physically remove her from the race. Luckily, some of her male Syracuse teammates body blocked their grab: 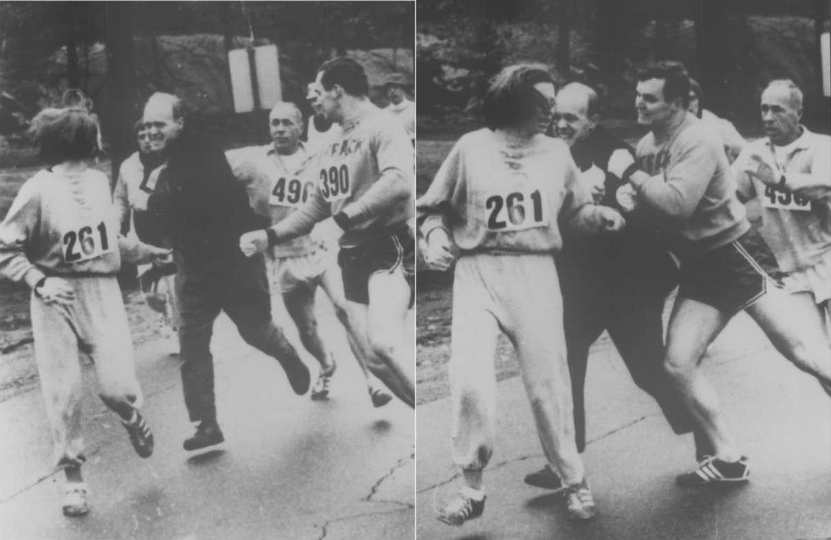 Why not let her run? The race was man-only, so her stats, whatever they may be, were invalid. Why take her out of the race by force? For the same reason that women were excluded to begin with: their actual potential is not obviously inferior to men’s. If it were, there’d be no risk in letting her run. The only sex that is threatened by co-ed sports is the sex whose superiority is assumed.

Women were allowed to begin competing in marathons starting in 1972 — not so very long ago — and, just like Melponeme, while they’ve been slower on average, individual women have been beating individual men ever since. In fact, women have been getting faster and faster, shrinking the gender gap in completion times, because achievement and opportunity go hand in hand.

Thanks Kathrine Switzer, and congratulations.

When it comes to ultrarunning, women can sometimes outright beat men.

Not something that most people would expect in a world of assumed male superiority.

I am very interested in the sociology of sport! Can you recommend some of the books you are reading about it? Thanks!

The real scandal is in my own sport, Olympic Skeet. As a skill rather than a strength based sport, competition wasn't segregated by sex until the 1992 Barcelona Olympics, when for the first time a woman, Zhang Shan of China, won the gold, beating Juan Giha of Peru by one point, 223-222. Following this upset, at the Atlanta games in 1996, women were not just segregated from men but removed entirely- Olympic Skeet became a men only event, with no women's competition running alongside at all.

Oh lawdy. Why is this off the front page?

>Not so very long ago.

Yeah, only about forty years.

For decades, pole vault was men only.  Now that women compete, they have juggled the set up so that it won't be so obvious that women would soon surpass men on equivalently specified equipment.

That's one of the ways that women are "accomodated" when there is reason to believe that they would outperform men.  Same for some sledding runs in the winter olympics where they move the start for a shorter course.

It's nice to see that the men in the competition weren't interested in seeing a a fellow competitor being forcefully removed.  I'll remember to cite this as proof that feminists aren't just female.  (Since "feminism" is such a loaded word, I find that many people, especially men, avoid the term.  And even I find myself redefining the word rather frequently.)

This reminds me, women are still barred from the long jump in Olympic skiing... a sport where it's likely that women (with overall light frames) would be likely to beat the men.  The best argument for that that I've heard is that they don't want to deal with the potential issues from a women having a bad landing and badly injured/killed in a jump... and I hate to break it to them, but by that reasoning they should ban the sport altogether if injury is that big of a concern.  Why is it more of an issue if a women gets hurts as opposed to a man in sports?

Hi there! I actually just finished a 30 page historical paper on this very topic (the exclusion of women from distance running). I'm glad to see that you are bringing this topic to attention also. There is still a long, long way to go before women have equal opportunity and access to sport and athletics. There are still so many double standards and instances of discrimination. Consider, for example, the August 2011 ruling concerning Paula Radcliffe's world-record marathon time. The new ruling, from when I last heard and correct me if I am mistaken, is such that now women cannot qualify for world records in marathons/events that are run in races with both sexes participating. This would have ruled out Radcliffe's world-record time. There was fortunately a strong public backlash against this, and so no records achieved prior to the ruling will be revoked. However, the very idea that prompted the ruling--mainly that women tend to run better in competition with men thus giving them an "advantage" against times run in women-only races--never even considered the fact that men can also be pushed to achieve better times by women in their races. There are many other discriminatory nuances to the ruling. It proves what many have commented, that there is still an inexcusable amount of discrimination (and paternalism) based on sex.

There was actually another woman, Roberta Gibbs, who ran Boston before Kathrine Switzer once in 66 and again in 67 with Switzer. She jumped in the race shortly after it started, so she didn't register but still ran. Gibbs finished about an hour faster than Switzer, too. Switzer did a lot with getting the women's marathon into the Olympics also.

The man defending her was her boyfriend as well as her competition. Just watched her interview today in Sociology class.

Switzer and Jock Semple (the race official in the photos) later became friends. Bobbie Gibb also ran the Boston Marathon in 1967, and the year before, by jumping in without a number. http://www.kathrineswitzer.com/boston.shtml

The oldest finisher in this year's Boston Marathon was Katherine Beiers (age 84). This is not the first time she was the oldest finisher.
http://www.santacruzsentinel.com/article/NE/20170417/SPORTS/170419705

[…] Sourced through Scoop.it from: thesocietypages.org […]

The mentality of not allowing women to run long distances included some thinking women's uteruses would simply slip and fall out or otherwise impair motherhood.