Sexism in American society has been on the decline. Obstacles to female-bodied people excelling in previously male-only occupations and hobbies have lessened. And women have thrived in these spaces, sometimes even overtaking men both quantitatively and qualitatively.

Another kind of bias, though, has gotten worse: the preference for masculinity over femininity. Today we like our men manly, just like we used to, but we like our women just a little bit manly, too. This is true especially when women expect to compete with men in masculine arenas.

A recent study by a team of psychologists, led by Sarah Banchefsky, collected photographs of 40 male and 40 female scientists employed in STEM departments of US universities. 50 respondents were told they were participating in a study of “first impressions” and were asked to rate each person according to how masculine or feminine they appeared. They were not told their occupation. They were then asked to guess as to the likelihood that each person was a scientist, then the likelihood that each was an early childhood educator.

Overall, women were rated as more feminine than men and less likely to be scientists. Within the group of women, however, perceived femininity was also negatively correlated with the estimated likelihood of being a scientist and positively correlated with the likelihood of being an educator. In other words, both having a female body and appearing feminine was imagined to make a woman less inclined to or suited to science. The same results were not found for men. 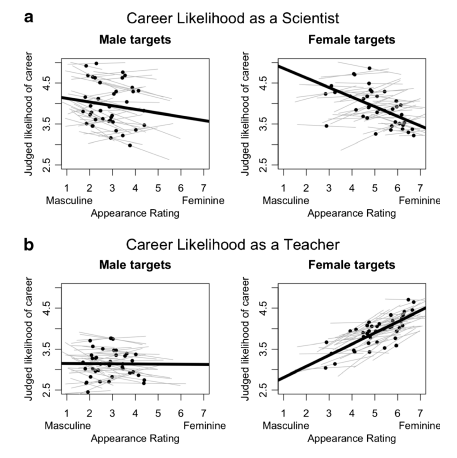 Banchefsky and her colleagues conclude that “subtle variations in gendered appearance alter perceptions that a given woman is a scientist” and this has important implications for their careers:

First, naturally feminine-appearing young women and those who choose to emphasize their femininity may not be encouraged or given opportunities to become scientists as a result of adults’ beliefs that feminine women are not well-suited to the occupation.

Second, feminine-appearing women who are already scientists may not be taken as seriously as more masculine-appearing ones. They may have to overperform relative to their male and masculine female peers to be recognized as equally competent. Femininity may, then, cost them job opportunities, promotions, awards, grants, and valuable collaboration.