Or, the famous one: “The only disability is a bad attitude.” 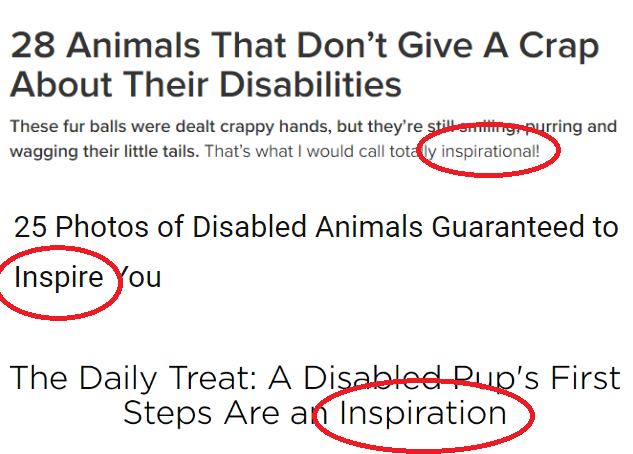 If one is constantly gawking and aww-ing over pictures and stories about animals with disabilities, then they don’t have to spend time thinking about actual disabled people, or the ableism against disabled humans that still exists.

When featuring animals, accommodation is no longer the least a society can do: a basic acknowledgement that human beings in all forms deserve access to their societies. Instead, it’s over-the-top, idiosyncratic and rare, even excessive in its generosity. To find inspiration in a turtle who has been fitted with a tiny skateboard, for example, is to frame accommodation as something one does out of the goodness of one’s heart, not a human and civil right.

One troubling aspect of this is the subtext we get, that if you're disabled and also feeling self-doubt, frustration, rage, depression, or complaining about your condition - normal human things that happen to everyone - then you're not inspiring and we don't want to deal with you.

That last sentence looks like it's saying it dehumanizes animals, too. Which. Um. Yeah.

I don't see this stuff as fully parallel, but ymmv I guess.

I was thinking about this lately and couldn't quite put my finger on why it bothered me.
I also wonder about disabled people who can't do so-called "inspirational" things. How do they feel when these others get lauded all over facebook?