Overall, 95% of the authors and 96% of the reviewers were non-Latino white (compare that with the fact that whites are just over 60% of the U.S. population as of 2016). 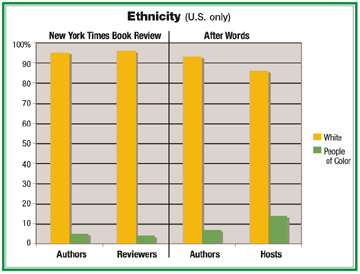 Women accounted for between 13 and 31% of the authors and reviewers: 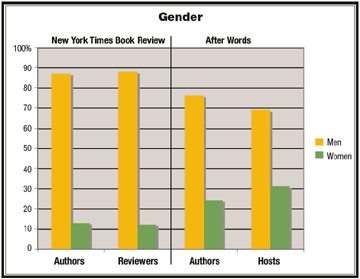 This is some hard data showing that white men’s ideas are made more accessible than the ideas of others, likely translating into greater influence on social discourse and public policy.  These individuals certainly don’t all say the same thing, nor do they necessarily articulate ideas that benefit white men, but a greater diversity of perspectives would certainly enrich our discourse.

I think a further breakdown of the data by subject matter would better illustrate the disparities, at least in fields where the disparities in race/gender representation would be meaningful.

Um, I find it interesting that the 31% of female reviewers show up on TV... where they can be looked at. Weird? I think so. I guess their opinions are less important when their faces aren't attached.

What I find to be extremely important but not present here, in terms of being able to interpret this data, is the racial/gender breakdown of authors in general. While the breakdown of reviewers can be looked at on its own, the breakdown of the authors reviewed is less clear cut. In order to know the significance of that data, it's necessary to know the breakdown of authors in general. Because, for example, while the books these media review might not match certain groups' percentage of the total population, they might be closer to matching that groups' percentage of *authors*. I'm not saying that's the case, but we don't know until we have the data. Because, for instance, the kind of situation in my example would put more of the responsibility on publishers and slightly less on reviewers.

[...] Sociological Images recently brought attention to research by Fairness and Accuracy in Reporting on the race and gender of book reviewers and authors. As a reviewer of color at dotrad as well as Political Media Review, I read it with much interest. [...]

[...] work) to show its existence and how thoroughly embedded it is in our culture.   A big hat-tip to Sociological Images for the leg work (which I am reposting it its entirety) in condensing the study originally found on [...]

Well, it's not hard to read this and immediately think about how as an African-American female, I've had three books on workplace diversity published since 2004, the most recent one, "The Diversity Code", published by the American Management Association last fall, yet the coverage of my books by reviewers has never received the number of reviews as my male counterparts. I wouldn't even limit that observation to just white male counterparts. I really do try NOT to jump to the conclusion that something can solely be reduced to an issue of race or gender. But it is interesting that my feeling about this wasn't totally groundless. Now that the issue has been identified, any thoughts on how to create a different reality?

I was just commenting to my Father, the other day, that all of the narrators on TV nature shows are white-male. I guess there is a new TV season just started, and they are all hosted by white-males.
White-males objectively, or scientifically, presenting nature to us, whilst the African-American and the Mexican-American ARE the wild nature?
It is enough to make one want to support the Axis against the Good Guys.
--Martin Serna

Having spent my whole career in the book publishing industry, I care a lot about this issue. It's important to know that the data in the 2010 article is now quite dated. In the last couple of years, the NY Times Book Review has made a strong effort to give greater prominence to books by women and the ideas of women.

I am looking at the latest issue of the Book Review (dated March 26, 2017), and it contains 10 reviews written by women, 3 written by men. Of four feature articles in this issue, three are by women.

I've been paying attention to this issue for a while, and I've definitely noticed a meaningful change at the Times.

I associate Shanghai with long trips and reading books. I am sure that the culture of this city depends on the education and nationalization of the canonical principles. I recently read a cool book https://freebooksummary.com/category/staying-fat-for-sarah-byrnes where the author recalls Shanghai and its historical role in the transit Asian route.

Hello friends, do you love to read books? If yes, then you can try the best collection of thriller writer Russell Parkway books which I have been reading for a long time. That would be great for you if you read his publications.

Carpet cleaning is a very important part of maintaining your home. The carpet in your home can be the most expensive part of your home, and it is important that you take good care of it. Carpet cleaning is not just for homes with pets or children, but for anyone who wants their carpets to look nice and clean. Try this carpet cleaning suwanee for more ideas. There are several different types of carpet cleaners that you can choose from. One type of cleaner uses water and detergents; another uses chemicals; and another uses steam. Which type of cleaner you use depends on what type of carpet cleaner you want to use.

LeafGuard by Gutter Helmet is the original gutter protection system that was designed to protect your home from the elements. The leafguard atlanta award-winning products have been protecting homes for over 25 years and are installed by certified installation teams across the country. If you have any questions about which product line is right for your home or commercial property, please contact us today!