Is Mass Murder Now Part of the Repertoire of Contention?

If there’s one thing Americans can agree upon, it might be that people shouldn’t be indiscriminately firing guns crowds, no matter how angry they are. The shooting in the Ft. Lauderdale airport is just the latest example. Mass shootings are on the rise and I’m fearful that what we are seeing isn’t just an increase in violence, but the rise of a new habit, a behavior that is widely recognized as a way to express an objection to the way things are.

To register an objection to something about the world, a person or group needs to engage in an action that other people recognize as a form of protest. We know, in other words, what protest looks like. It’s a strike, a rally, a march, a sit-in, a boycott. These are all recognizable ways in which individuals and groups can stake a political claim, whereas other group activities — a picnic, a group bike ride, singing together — are not obviously so. To describe this set of protest-related tools, the sociologist Charles Tilly coined the phrase “repertoire of contention.” Activists have a stock of actions to draw from when they want to make a statement that others will understand.

A culture’s repertoire of contention is in constant evolution. Each tool has to be invented and conceptually linked to the idea of protest before it can play this role. The sit-in, for example, was invented during the early civil rights movement. When African American activists and their allies occupied white-only restaurants, bringing lunch counters to a halt to bring attention to the exclusion of black people, they introduced a new way of registering an objection to the status quo, one that almost anyone would recognize today.

New ways of protesting are being invented every day: the hashtag, the hacktivist, and shutting down freeways are some newer ones. Some become part of the repertoire. Consider the image below by sociologist Michael Biggs, which shows how suicide as a form of protest “caught on”  in the 1960s: 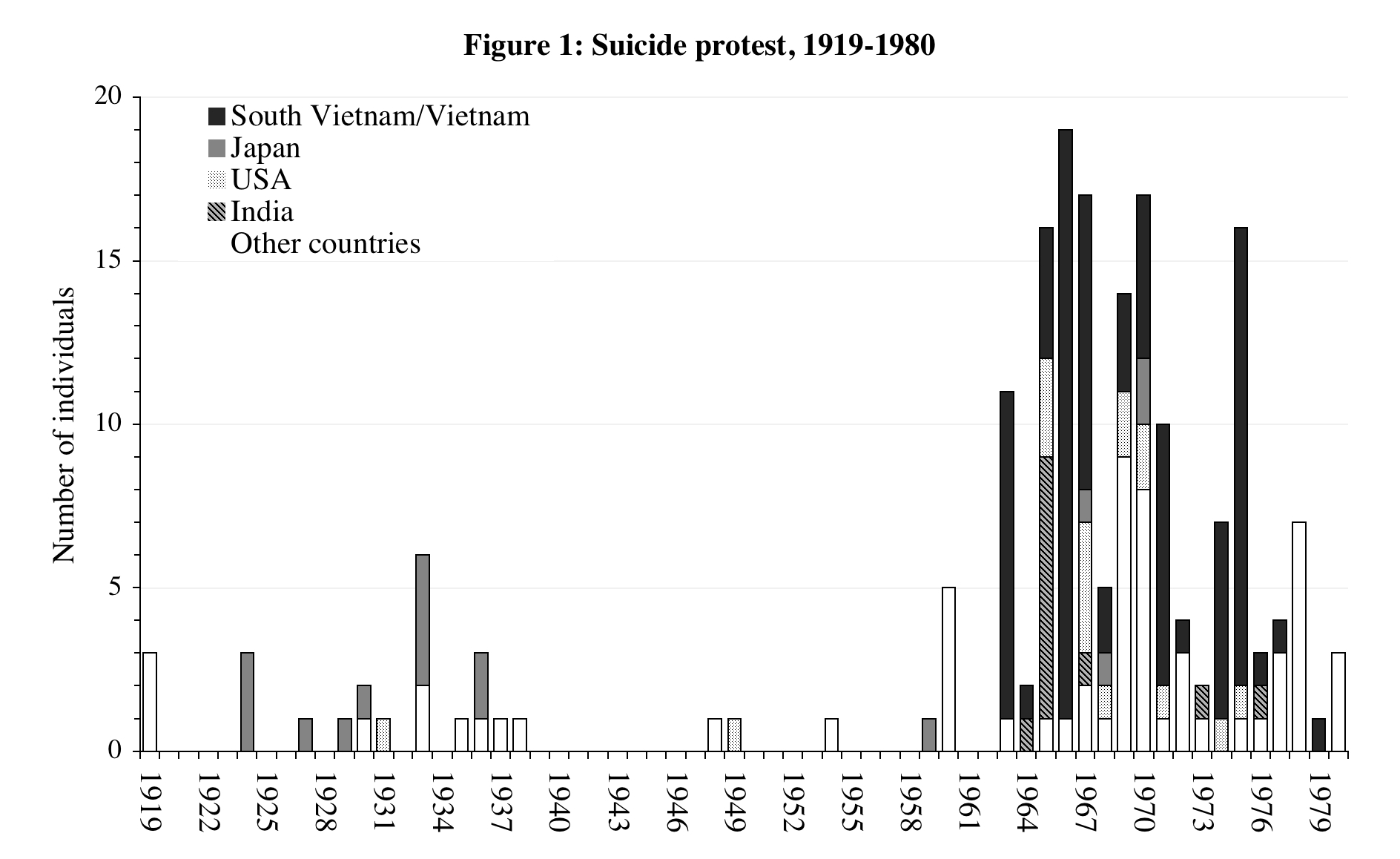 I am afraid that mass murder has become part of the repertoire of contention. This is theoretically tricky – others have fought over what really counts as a social movement action – but it does seem quite clear that mass murder with a gun is a more familiar and more easily conceptualized way of expressing one’s discontent and then it was, say, pre-Columbine. If a person is outraged by some state of affairs, mass killing is a readily available way to express that outrage both technically (thanks to gun regulation) and cognitively (because it is now part of the recognized repertoire).

Dylann Roof wanted to register his discontent with the place of black people in American society, Robert Lewis Dear stormed a Planned Parenthood with a pro-choice message, Elliot Rodgers was angry about women’s freedom to reject him, Omar Matteen killed dozens to express his (internalized) disgust for homosexuality, Gavin Long communicated his sense of rage and helplessness in the face of black death by killing police. At some point each thought, “What can I do to make a difference?” And mass murder came to mind.

In the aftermath of such events, the news media routine contributes to the idea that mass murder is a form of protest by searching for an explanation above and beyond the desire to kill. That explanation often positions the rationale for the murder within the realm of politics, whether we call it terrorism, resistance, or prejudice. This further sends the message that mass murder is political, part of the American repertoire of contention.

The terrifying part is that once protest tools become part of the repertoire, they are diffused across movements and throughout society. It’s no longer just civil rights activists who use the sit-in; any and all activists do. Perhaps that’s why we see such a range of motivations among these mass murderers. It has become an obvious way to express an objection that the discontented can be sure others will understand.

Excellent piece, paradigm shift for me. Thanks.

I can't really accept murder as a form of protest or a "resource" for social movements. It's not a sustainable strategy, nor does it grow the sort of positive sentiment pools that feed the movement. Suicide is also very troubling, but it might be legitimately included in the effective repertoire of contention in some cultures. Self-immolations of Vietnamese monks and the Tunisian fruit-seller come to mind. But mass murder seems to cross a line into some darker territory that can no longer be conceived of as protest. It's either crime or, when organized on a large scale, revolutionary action.

A truly thought-provoking piece, thank you! It actually makes me think of Foucault in whose terms the power over life is the old right of the sovereign (that has changed into gouvernmentality and more subtle forms of control of bodies in capitalism). The individual and private right to die as in suicide can then be read as the ultimate protest against the state, evading statal power over one's body. And maybe so too can mass shootings be interpreted as a form of protest against a state power that does not manage (e.f. racial, gender, etc.) problems the "right" way...?

Slightly disagree because his attack was not internalized hatred towards homosexuals but only a cover to be remembered by his family as a heterosexual. He had many bullets after his initial attack and he had hostages. If it was primarily about hate he would not have voluntarily stopped pulling the trigger. The police fired more bullets than Mateen and since the evidence was blocked off we could not determine how many hostages were injured/killed by the police. Their tactical decisions fully supported contempt for homosexuality, and in a way, validated Mateen's thinking by treating homosexuals with far less respect for life over others. Wont get off topic with all the details but will highlight there were police inside after Mateen stopped firing so they knew is exact location and that is intel you never sacrifice without serious anomalies, yet those cops were removed. They also could have flooded vents with CS gas which is non lethal, and would have minimized injured/dead victims.

Think what we are witnessing is Social Terrorism differing from domestic and international terrorism because the motives are not set on any recognizable code or philosophy for goals. Roof does not fit as a ST because his terrorism was textbook Domestic as laid out in federal law.

Social terrorists like Lanza are not protesting any cause or position but they are completely rejecting the world around them. These killings will increase in frequency for the next few years and the impetus is not necessarily a mental defect. Citizens under the age of roughly 25 have lived their entire existence under a political mafia lifestyle where bullets are the ink. They have witnessed the bloody abusive war on terror campaigns and when you teach young people that killing can be the first, second, or ninth option for a response they will carry that message because it is so familiar.

Without abdicating personal responsibility of the perps who recently kidnapped and tortured a young man in Chicago, we cannot ignore how influence played it's role. As soon as I saw the story of how they streamed the torture an instant Obama gif popped into my head remembering when Obama admitted: "We tortured some folks." No high ranking official was ever prosecuted so the idea of such criminal disgusting behavior can appear to have some justification if the highest levels of our government are teaching those arts to our kids as a legitimate agenda.

This is not limited to younger people as seen by Michael Dunn who murdered a 17 year old after a brief argument over loud music. Dunn fired 10 shots into another vehicle killing Davis, but none of the other 3 in the same vehicle. He had to be tried twice because the first jury deadlocked on the murder charge. You can also see Dunn in police interviews before he was charged and it is nauseating because he truly honestly believed he was justified and largely due to how many times cops have made the exact same decisions in very similar situations.

Social terrorists are simply acting out what they see around them and unlike protesters, they have no desire for change, but only a reflection of a culture that justifies murder in the most absurd extremes.

Just read this today, but an important error you might want to correct. This says Robert Lewis Dear stormed PP with a pro-choice message when in fact he was anti-choice.