The Radical Fact of the Female Vote

No matter which way you voted or who wins, today will go down in history as the first time a woman either won or lost the presidency of the United States. Today, in a contemplative mood, I turned back to the chapter on politics I wrote with Myra Marx Ferree for our sociology of gender book. It’s an ode to the suffragist with a final paragraph that resonates very, very strongly on this day. Read, and let the reverberations of history stir your soul.

In 1848 a small group of American women made the decision to seek suffrage, the right to vote. For most of modern history, governments did not allow women this right, nor the other rights and responsibilities of citizenship—to serve on juries, give legal testimony, or hold public office—and American women were no exception. Many thought the idea was impossible, dangerous, even laughable. Opponents mocked suffragists, suggesting that giving women the vote was as ridiculous as giving it to housecats. 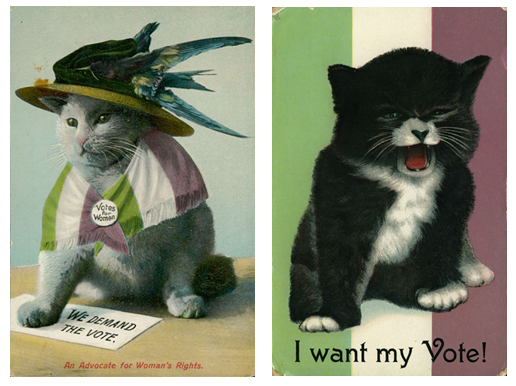 The fight for suffrage was not won quickly or easily and many suffragists died of old age before they could see their efforts realized. In addition to ridicule, suffragists faced government repression and violence. Most suffragists were peaceful, but some weren’t above aggression themselves. One group in the United Kingdom set buildings on fire and learned jujitsu to defend themselves from the police. Over 1,000 suffragists would be imprisoned in the United Kingdom and United States. There they endured brutal force-feeding after initiating hunger strikes that endangered their lives.

The fight for suffrage involved both inspiring coalitions and ugly divides. Many suffragists were abolitionists first, activists in the fight against human slavery. White and black men and women worked side-by-side for this hard-won victory. After slavery was abolished in 1865 and black men were granted suffrage in 1869, black women continued to fight valiantly for their own vote. As abolitionist Sojourner Truth observed: “If colored men get their rights, and colored women not theirs, the colored men will be masters over the women, and it will be just as bad as it was before.”

White suffragists often disagreed on whether their efforts should benefit all women or only white women. Anti-suffrage activists tapped into widespread animosity toward black people, reminding a racist public that women’s suffrage would not only put women into the voting booth, it would double the black vote. Some suffragist groups were themselves racist, excluding black women from their organizations, activities, or platform. Many black women started suffrage organizations of their own.

Eventually, suffragists began making alliances with women in other countries. By the early 1900s, this international women’s organizing had begun to shift public opinion in their favor. Finland and New Zealand were the first to grant women the right to vote in the 1910s. The United States came around in 1920, giving suffrage to both black and white women together. By then the movement was rolling across the globe. In less than thirty years, women’s suffrage became a global norm. The last state to disallow women’s voting, Saudi Arabia, allowed them to vote in 2015.

Today universal suffrage, the right of all citizens to vote, is the very definition of democracy. This right is taken for granted today, so much so that many people don’t even know the word anymore. In the 1800s, however, it was a wholly radical claim, defined as an idea that doesn’t (yet) resonate with most members of a population. In fact, it was a massively important step toward dismantling political systems that recognized some people as full citizens but not others. It was also extraordinarily disruptive to the social order and the distribution of power. It is a testament to the fact that, even when social conditions are stubbornly entrenched and defended by powerful people, change—even radical change—is possible.

Myra Marx Ferree, PhD is a professor at the University of Wisconsin, Madison. She is the recipient of numerous prizes for contributions to gender studies and does research on global gender politics. Among her many books is a textbook on the sociology of gender , with Lisa Wade.

Except we still don't have universal suffrage. During this election many examples of voting suppression have been recorded, and, in many states, felons may lose their right to vote permanently. Until all citizens have the right AND ability vote, we will still be working towards universal suffrage.

While his overt misogyny is appalling on any stage, the intersectionality of the offense and his female opponent should be looked at more closely. Why everyone who has a sister, daughter, or mother; or brother, son, or father for that matter didn't flee their support of such a thoughtless person is beyond my comprehension, but I cannot help but think that some people were so perturbed by the idea of a woman president that they pardoned him for these acts and those accused acts. With everything that happened in this election, the sexist remarks and undertones, I think this validated our unreadiness for a woman president.

Just get the device if you need towing, or any other roadside assistance, or car lockout services. It doesn't matter where ... visit https://carcarrier.netlify.app/car-carrier-jakarta-tanjung-pinang.html for detail

KontraktorEpoxy.co.id is a completely new way to discover and interact with consumers, construct devotion, and generate useful reviews and... tap https://berkahepoxy.neocities.org/jasa-epoxy-lantai-3d-pacitan.html for more information.

In need of a door manufacturer through Indonesia? Many of us manufacture aluminium doors on-page & provide you with quickly shipment circumstances, click https://jualpintulipatgeser.blogspot.com/2020/03/jual-pintu-lipat-geser-1-ngawi-0813.html for detail.

The individual teaching program in this article is understood to be exclusive teaching, the place one to three students can examine under the advice of any coach ... go to https://privat-inggris.netlify.app/kursus-bahasa-inggris-pademangan.html for further

Executive-Education.id is an educational institution that provides tutoring services where tutors go to the home, to make sure that students can study ... visit https://privatmurah.vercel.app/ for more information

Jabodetabek private tutoring services with teachers arriving at the house. A lot more than hundreds of active tutors are prepared to teach various skills and lessons of the to adults ... visit https://privat-sbmptn.vercel.app/les-privat-sbmptn-kembangan.html for more information