According to a report from the Brennan Center for Justice, tens and sometimes hundreds of thousands of votes are rejected or miscast because of known bad ballot designs. Intuitive design is especially important because approximately 50 million people each year encounter a ballot design for the first time, either because they’ve moved, are new to voting, or because the ballot has been revised. People who are most vulnerable to ballot design disenfranchisement are people living in poverty, older voters, and new voters.

Some problems with ballot designs: 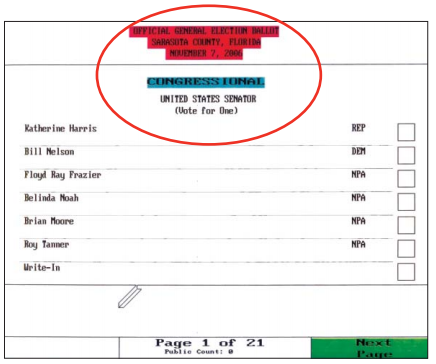 There are many examples of good and bad ballots at the Brennan Center’s report, Better Ballots.

The Brennan Center asserts that these problems are easily identified. Unfortunately, many jurisdictions aren’t paying attention: very few pre-test their ballot designs to discover problems and few examine results of election to discover which counties’ elections are most undermined by lost and miscast votes. Some jurisdictions, moreover, are operating under laws that require the use of ballot designs that we know are bad and many are using voting machines that are not flexible enough to accommodate good design.

Good ballot design, the report emphasizes, is non-partisan, well understood, inexpensive, and simple to implement. It may not be the most scandalous way to lose hundreds of thousands of votes, but it’s a real and substantial problem, and one that can be easily fixed.

Per the above description of who loses out, good ballot design is definitely partisan.

An interesting read. As a foreigner, I had no idea that there could be so many varying types of ballots in one country. In Canada we have a non-partisan, independent agency that is responsible for elections. No matter where you go in Canada, electoral ballots look the same and the voting process is the same. The only difference (obviously) are the names on the ballots.

Ballots can lose votes. For example, if you don't vote, then your vote is not counted and that means that the candidate who lost your vote will not win the election. Visit https://masterbundles.com/templates/presentations/powerpoint/strategy/ source to download free templates. If a voter doesn't make their voice heard in the voting booth or on election day, then their voice is silenced and they may never get to have their say about what happens in the world around them.

The vast majority of ballots are lost due to voter error, such as voting for too many candidates or not following instructions. Other ballots are lost because of problems with the voting machines or tabulation process. In some cases, ballots are simply never turned in or mailed in. Students should also read https://www.openbusinesscouncil.org/3-best-college-essay-writing-services-reviews-rankings/ article in order to get something special before entering into their exams.