Religious Trump Supporters Have Changed Their Mind about Morality

Most people agree that when this election is over, Trump will have changed American politics. Bigly, perhaps. But one of the more ironic changes may be that he caused the most conservative sectors of the electorate to relax their views on the connection between a politician’s private life and his fitness for public office. (Yes, “his.” Their ideas about the importance of a woman’s private sexual life may not have evolved in a similar way.)

For religious conservatives, Donald Trump presents quite a challenge. It’s the sex. One of the things that conservatives are conservative about is sex, and Trump’s sexual language and behavior clearly fall on the side of sin. What to do? Conservatives might try for motivated cognition and refuse to believe the women who were the recipients of Trumps kissing, groping, and voyeurism. That’s difficult when Trump himself is on the record claiming to have done all these things, and making those claims using decidedly unChristian language.

Instead, they have changed their judgment about the link between groping and governing. Previously, they had espoused “moral clarity” – a single principle applied unbendingly to all situations. Good is good, evil is evil. If a man is immoral in his private life, he will be immoral or worse as a public official.

Now they favor “situational morality,” the situation in this case being the prospect of a Clinton victory. So rather than condemn Trump absolutely, they say that, although he is out of line, they will vote for him and encourage others to do likewise in order to keep Hillary out of the White House. For example, in a USA Today op-ed, Diann Catlin, a “Bible-thumping etiquette teacher” says:

I like God’s ways. … I also know that he wants discerning believers to take part in government. … God has always used imperfect people for his glory.

God uses people like Trump and like me who are sinners but whose specific issues, such as the life of the unborn child, align with his word.

She includes the “we’re all sinners” trope that’s so popular now among the Trump’s Christian supporters (funny how they never mention that when the topic is Bill Clinton’s infidelities or Hillary’s e-mails). More important is the implication that even a sinner can make good governmental decisions. That’s an idea that US conservatives used to dismiss as European amorality. In government, they would insist, “character” is everything.

It’s not just professional conservatives who have crossed over to the view that sex and politics are separate spheres and that a person can be sinful in one and yet virtuous in the other. Ordinary conservatives and Evangelicals have also (to use the word of the hour) pivoted.

Five years ago, the Public Religion Research Institute at Brookings asked people whether someone who had committed immoral acts in their private life could still be effective in their political or professional life. Nationwide, 44% said Yes. PRRI asked the same question this year. The Yes vote had risen to 61%. But the move to compartmentalize sin was most pronounced among those who were most conservative. 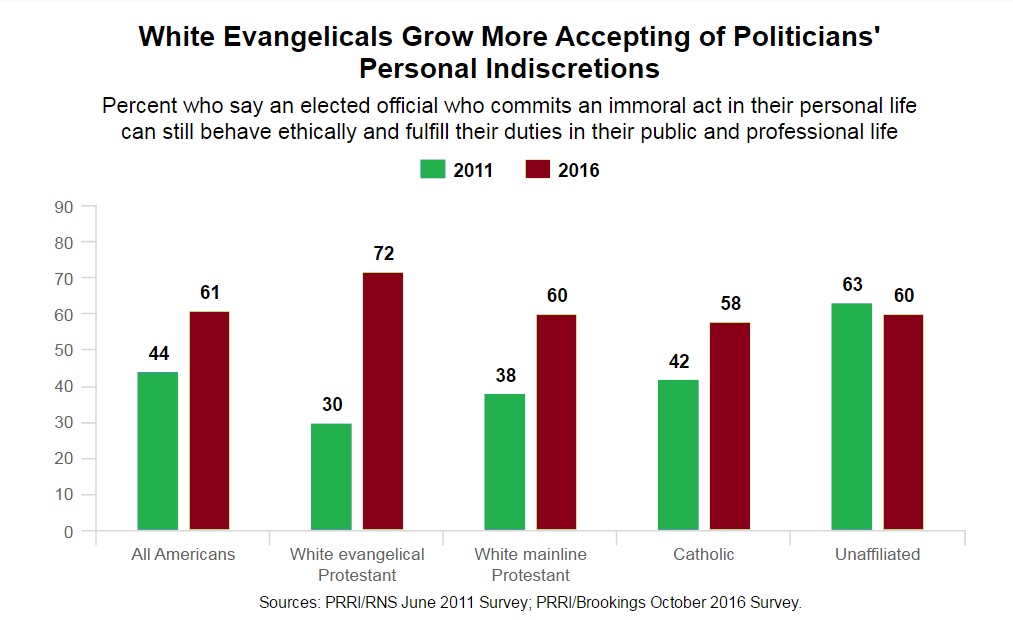 The unchurched or “unaffiliated” didn’t change much in five years. But White Catholics and mainline Protestants both became more tolerant of private immorality. And among the most religiously conservative, the White evangelical Protestants, that percentage more than doubled. They went from being the least accepting to being the most accepting.

As with religion, so with political views. 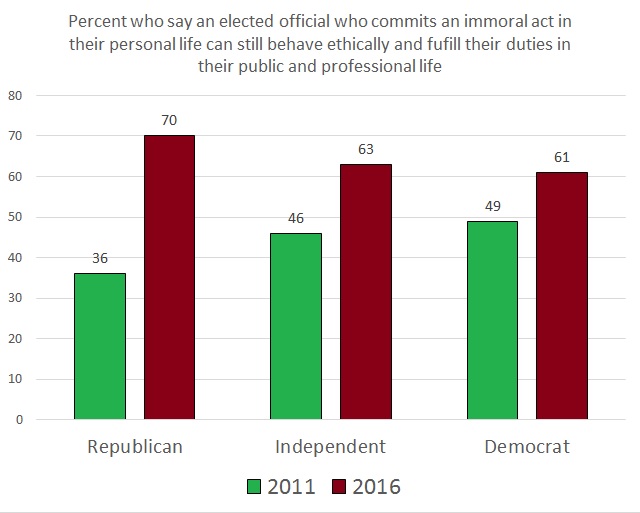 People of all political stripes became more accepting, but when it came to judging a privately immoral person in public life, Republicans, like White evangelicals, went from least tolerant to most tolerant.

What could have happened?

There’s no absolute proof that it was the Donald that made the difference. But those White evangelicals support him over Hillary by better than four to one. Those who identify as Republicans favor Trump by an even greater margin. There may be some other explanation, but for now, I’ll settle for the idea that in order to vote for Trump, they had to keep their judgment of him as a politician separate from their judgment of his sexual behavior – a separation they would not have made five years ago.

The good news is Trump has no chance of winning. Religion is on the decline as more and more people reject having imaginary friends. I'm predicting Hillary by a landslide. While I will vote for Gary Johnson, Libertarian.

Thank you. Evil and good never change, it's the perception of it that has changed. Christians have fallen for the lie, "sin is sin, do not judge"...blah, blah, blah because it is convenient. It's all a setup for the great deception when so called Christians will be flocking to get their Mark of the Beast. Be wise.

What has changed is the definition of "Christian." The narrow gate (Matthew 7:13-14) is getting more narrow and fewer are even able to find it. It's very sad.

As a Christian I am sick and tired of people saying we as Christians have dropped our moral standing or whatever. NO I have not!! I know Trump's sins but I also know my past and my sins and all sins are the same in God's eyes. So how dare we judge him we are ALL sinners! We are not voting for the next pope here people, we are voting for the person that will uphold our Constitution and our right to have our religion and practice it without prosecution! We are voting for the person that is pro-life! We are voting for the person that wants to keep our borders safe and give us an equal trade deal! We are voting for the security of our country! We have two choices, Hillary with a blood trail longer then a great white shark, a woman that was fired from The State Dept for ethical and lying issues and a husband that had to resign or be impeached from the presidency for his many affairs with women. I just can't go on the list is WAYYYY to long of her corruption and dishonestly. Two choices and only ONE candidate healthy enough and sane enough to be president, Trump!! Currently Jesus is not on the voting polls. :)

You call Christian hypocritical for, "She includes the “we’re all sinners” trope that’s so popular now among the Trump’s Christian supporters (funny how they never mention that when the topic is Bill Clinton’s infidelities or Hillary’s e-mails.)

The difference may be that the Clinton's have never admitted they were wrong and continue lie even under oath. Whereas, Trump admitted what he did was wrong and apologized.

At the expense of Biblical morality, we accept the lessor of two or four evils to save a nation. That doesn't make any kind of sense. Fighting evil with evil is no different than a house divided and we know it cannot stand.

Besides, we must look to God alone to save a nation when we renounce and repent. Remorse is nothing short than God caught me but I'll go back to my sin shortly.

Are we that far removed from the Word of God?

[…] I do my damnedest to be consistent. My choices and actions should reflect my ethics and values. But I’m also aware of how good the human brain is at being able to create post-hoc justifications for actions. There are all sorts of examples, like this one about how religious Trump supporters have suddenly changed their mind. […]