Controversy erupted in 2014 when video of National Football League (NFL) player Ray Rice violently punched his fiancé (now wife) and dragged her unconscious body from an elevator. Most recently, Deadspin released graphic images of the injuries NFL player Greg Hardy inflicted on his ex-girlfriend. In both instances, NFL officials insisted that if they had seen the visual evidence of the crime, they would have implemented harsher consequences from the onset.

Why are violent images so much more compelling than other evidence of men’s violence against women? A partial answer is found by looking at whose story is privileged and whose is discounted. The power of celebrity and masculinity reinforces a collective desire to disbelieve the very real violence women experience at the hands of men. Thirteen Black women collectively shared their story of being raped and sexually assaulted by a White police officer, Daniel Holtzclaw, in Oklahoma. Without the combined bravery of the victims, it is unlikely any one woman would have been able to get justice. A similar unfolding happened with Bill Cosby. The first victims to speak out against Cosby were dismissed and treated with suspicion. The same biases that interfere with effectively responding to rape and sexual assault hold true for domestic violence interventions.

Another part of the puzzle language. Anti-sexist male activist Jackson Katz points out that labeling alleged victims “accusers” shifts public support to alleged perpetrators. The media’s common use of a passive voice when reporting on domestic violence (e.g., “violence against women”) inaccurately emphasizes a shared responsibility of the perpetrator and victim for the abuser’s violence and generally leaves readers with an inaccurate perception that domestic violence isn’t a gendered social problem. Visual evidence of women’s injuries at the hands of men is a powerful antidote to this misrepresentation.

In my own research, published in Sociological Spectrum, I found that the race of perpetrators also matters to who is seen as accountable for their violence. I analyzed 330 news articles about 66 male celebrities in the headlines for committing domestic violence. Articles about Black celebrities included criminal imagery – mentioning the perpetrator was arrested, listing the charges, citing law enforcement and so on – 3 times more often than articles about White celebrities. White celebrities’ violence was excused and justified 2½ times more often than Black celebrities’, and more often described as mutual escalation or explained away due to mitigating circumstances, such as inebriation.

Data from an analysis of 330 articles about 66 Black and White celebrities who made headlines for perpetrating domestic violence (2009-2012): 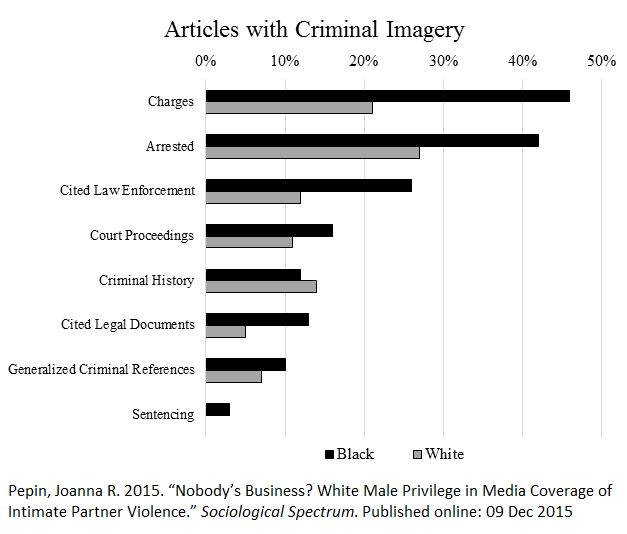 Accordingly, visual imagery of Ray and Hardy’s violence upholds common stereotypes of Black men as violent criminals. Similarly, White celebrity abusers, such as Charlie Sheen, remain unmarked as a source of a social problem. It’s telling that the public outcry to take domestic violence seriously has been centered around the NFL, a sport in which two-thirds of the players are African American. The spotlight on Black male professional athletes’ violence against women draws on racist imagery of Black men as criminals. Notably, although domestic violence arrests account for nearly half of NFL players’ arrests for violent crimes, players have lower arrest rates for domestic violence compared to national averages for men in a similar age range.

If the NFL is going to take meaningful action to reducing men’s violence against women, not just protect its own image, the league will have to do more than take action only in instances in which visual evidence of a crime is available. Moreover, race can’t be separated from gender in their efforts.

Joanna R. Pepin a PhD candidate in the Department of Sociology at the University of Maryland. Her work explores the relationship between historical change in families and the gender revolution.

How is "violence against women" an example of the passive voice?

The hypothetical sentence "Ray Rice committed an act of domestic violence against his fiancé" is a clear cut example of using the active voice.

To use actual example of this construction from one of the articles you linked "the media consistently ignores the violence perpetuated against black women" and "Holtzclaw was accused of 36 counts of abuse against 13 women" are both also clear cut examples of using the active voice.

I believe that the liberal media has caused a division in our country over color. For example if a white police officer shoots a black person that will make the liberal news very quickly. People will be out rioting about that black person getting shot for weeks. If there is a white officer that shoots a white person that doesn't get on the news as quickly. Our country needs to worry about all lives matter not just African americans. I care about all people of color.
I also don't think we should put a percentage on if whites or blacks are more violent. Everybody in America no matter what color you are can come from a broken home. When you come from a broken home that child could have some run ins with the law once they get older.

The interesting part to me about this article is that the media does not have a lot of coverage on the issues of domestic violence. For instance during the war in Iraq it was publisised as horrific that 6000 + service men and women died. God bless them for there courage and valor. During the same time, according to the huffington post more than 14000 woman died from domestic violence. The media lacks the for thought to bring domestic violence issues to the forefront. When they do it usually is because the person involved is a celebrity. Women make up 85% of all of the domestic violence cases annually. The largest percentage of woman abused are black. Even cities understand the socialogical effect of domestic violence, huffington post said that 50% of cities in the US site domestic violence as the primary reason for homelessness. The reason that a lot more woman are getting abused who are black is because of socio economic factors such as poverty. 9.9 percent of white people are impoverished, while 27.8 percent of black people are impoverished. The socio economic difference alone makes crimes against middle to upper class woman more important. Since the news reports on these instances very few times per year more black people will come under scrutiny than white people. The truth is that white people commit 3 times more crimes than black people. The reduced amount of white people below the poverty line is the reason thee things ar not being discussed. The news favors the lower class, the middle and upper class are not covered in this area as much and because of this women are less likely to come forward about continued abuse.

The first paragraph ends with the idea that had the NFL seen more evidence, they would have inflicted harsher punishments on their players. It could be that the NFL is not more strictly punishing their players' violent actions because they have a bias towards their own players. With all the media allegations the NFL has come up against in the past (concussion protocol, specifically), perhaps they are looking to protect their brand from future scrutiny, regardless of how despicable the actions may have been. When the NFL seems protective of their players, it is understandable why: millions of people watch them every week. They're one of the biggest institutions in American culture, so they're obviously goo have to be protective of their brand and reputation.

Regardless of fame or notoriety, people must be held accountable for their despicable actions, even if it is nothing more than an accusation. However, those actions do not seem to faze the viewers, because they still tune in week after week to watch these athletes play. So, who is to blame: the NFL for letting their athletes' crimes slide, or the casual viewer who continues to watch the product despite knowing who/what they are supporting? Yes, the NFL should absolutely punish their athletes for their violent crimes, but shouldn't the viewer also stop supporting the NFL and their players if they believed something immoral was going on? If people stopped watching these players and made it abundantly clear they will not support these violent individuals, would the NFL care? It is difficult to tell. But large corporations like these pay attention to one thing: attention. If people continue to watch/purchase the product regardless of their moral convictions, the NFL will not care about said convictions: they will only care about viewership and ratings.

The American people need to stand up in one unanimous voice and declare to the NFL that they will not accept athletes who commit such horrible crimes being broadcasted to them through their TV screens. If the people do not make their voices heard, then the NFL will not change anything. If nothing changes, then it sends a clear message to the NFL: it is acceptable to commit violent crimes.

I believe that the liberal media has caused a division in our country over color. For example if a white police officer shoots a black person that will make the liberal news very quickly. People will be out rioting about that black person getting shot for weeks. If there is a white officer that shoots a white person that doesn't get on the news as quickly. Our country needs to worry about all lives matter not just African americans. I care about all people of color.
I also don't think we should put a percentage on if whites or blacks are more violent. Everybody in America no matter what color you are can come from a broken home. When you come from a broken home that child could have some run-ins with the law once they get older.

[…] the crimes committed. Joanna R. Pepin, a PhD of Sociology at the University of Maryland, conducted a study observing articles with criminal imagery of black vs. white men. In her research, she […]

The sociological understanding of racial privilege in the social construction of IPV is aided by these findings.moto x3m