Sociologists distinguish between the terms norm, normal, and normative.

These three terms do not always work in sync, which is why they’re interesting.

I thought of these distinctions when I looked at a submission by Andrew, who blogs at Ethnographer. Bike lanes in Philadelphia used to be designated with this figure: 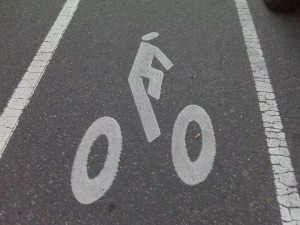 Today, however, they’re designated by this one: 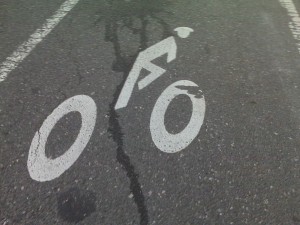 I just noticed that the same figure has appeared on streets here in Austin, TX.

My first thought was, "Why does that bicyclist have a bowl on her head?"

To me the updated biker also looks more purposeful, motivated, active, perhaps even driven (no pun intended). While the old rider could be on a leisurely ride, the new rider looks like a pro with somewhere to go - a purpose worthy of a designated lane. Perhaps in addition to attempting to make helmets normative, the use of the new image is also an attempt to elevate the overall status of bike riders - maybe so they will be respected by drivers or so more drivers will consider biking instead of driving.

The bike lane stencil in NYC uses the helmet guy too. And many (most) of them have had a smiley face added with a sharpie. Is that normative too? You should be happy when you're on your bike, dammit!! :-)

But one could also say that, by showing bicyclists with helmets on, they promote the idea that helmets *are* the norm, even if they aren't, since the more people see bicyclists with helmets, the more they will associate bikes and helmets even if subconsciously. And since people often like to follow the norm, that's not a bad thing. It's like how people often take cues from television as to what is "the norm" in real life, even though what's on television often isn't the norm at all -- or even normal.

Mushroom people ride in the bike lanes around Northern California as well. It's a law that all riders under 18 wear helmets.

Christ on a bike. Could they not have picked something to mark a bike lane that looks more like a bike and less like penis graffiti [old logo] or a scene from The Prisoner [new logo]?

Not so sure about these distinctions. Are you trying to distinguish by levels of stimga attached? A norm having no antithesis to stigmatize, normal having a non-stigmatized antithesis and normative having a stigmatizng power? Is it normative that the bike has two wheels as well (that this lane is for bycycles but not unicycles?)? Is it normative that the bike lane is there at all (instead of riding anywhere you want)? Don't these distinctions all sort of blend into each other? Seems your indicating that normative 'does' something by promoting a moral ideal but don't norms and what is normal do something as well? Isn't the perception of what's typically going on (the patterns of life you notice) have an effect in itself?

Is it just me or does the symbol appear to be missing a bike frame? Looks like a rider with two wheels.
The helmet issue has been a controversy here in Australia, where helmets have been mandatory for 20-odd years now - would it encourage more people to ride if helmets were not compulsary? (our bike logo is sans helmet btw)

There's no good way around this, but the default "helmet guy" (re:Tyler) is also default male (or at least has short hair).
I can't think of a good solution, but it's just another blow to females in a bike culture that I've found can be pretty misogynist.

To me the change in the representations of cyclists shows how cycling is perceived today. The first figure seems like a casual rider on a utility bike, where you sit more upright, and is designed for functionally getting around the city. The second seems to show a rider in a more active position, like on a road/racing bike, which is designed for speed. One could imagine the stick figure appropriately filled in with a full spandex bike suit, gloves, bike shoes, and an expensive multi-geared racing bike.

The first biker is one who functionally bikes the city, maybe out of economic necessity. The second image is a more middle-class biker, who bikes for a variety of reasons, but can afford all the fancy (and expensive) biking accoutrements. This person may cycle to work, but also does 40-mile treks on the weekends on designated bike trails.

To me it seems to tell the story, not of classless cyclists retaking the streets, but rather of the rise of middle-class recreational cycling, and then those recreational cyclists deciding it would be nice to bike to work also. I'm sure (as some above commenters have noted) that we can also read into the unsaid gender (and racial) understandings of this new kind of quasi-recreational cyclist.

I'm just glad they switched to a person on a bike the had a diamond for along time then car pool lanes started up using the same symbol and i though those are some fast cyclists to be on the highway!

and I agreed he has purpose making it seem faster.

Yup, those have been showing up here in the Bay Area (South Bay) for about a year now.

I once heard Robert Nozick (of blessed memory) describe normative sociology as the science of what ought to be the causes of our social ills. I finally understand.

The city of Philadelphia is being preachy and moralistic. If only they'd just leave everyone the hell alone.

"Kids have to wear helmets for everything but wh**king off these days."

Hi,
Would it be possible to provide a reference to some text explaining this distinction? Some academic text I can cite.

Norm and normativity are both defined, but normality is only defined in opposition to abnormality, which is itself left undefined. Thus, the claim that "dating people of the same sex is perfectly normal" is unsubstantiated.

Did you really need to denigrate christians in your example? Kind of an unnecessary, cheap shot, Lisa. We're not all cunts...with that said, thanks for the post. Found it to be quite helpful. Thanks.

[…] Thesocietypages.org puts it the following way: […]

[…] norms are impossible to exist. If for instance what is considered “murder” became normal, “society” as we typically understand it would fundamentally cease to exist. There have […]

[…] Thesocietypages.org puts it the following way: […]