How Our Media Bubble Protects Our Ideologies

How are media sources from opposing sides of the political spectrum covering the election? Most of us have no idea. We live in a media “bubble,” one in which we usually only consume “friendly” material: news and opinion from outlets and commentators who share our lean.

At Facebook, employees followed a sample of 10.1 million users who publicly identified their political leanings. They then looked at the forces that created the bubble: (1) “ideological homophily,” the degree to which friends shared the same leanings; (2) Facebook’s algorithm, feeding you things it thinks you want to see; (3) and click-through behavior, which links were ignored and which attracted interaction.

They concluded that “individuals’ choices played a stronger role in limiting exposure” to politically diverse content than did their algorithm. (You can get the data yourself here.)

At the Wall Street Journal, you can take a look at these different media bubbles side-by-side. They frame the data as what you might see in your Facebook feed if most of your friends identify as “very liberal” or “very conservative.” More broadly, what the data represents is the use of Facebook data as an insight into the bigger media bubbles we all live in both on- and off-line.

Here’s the first four results for posts about “Barack Obama”: 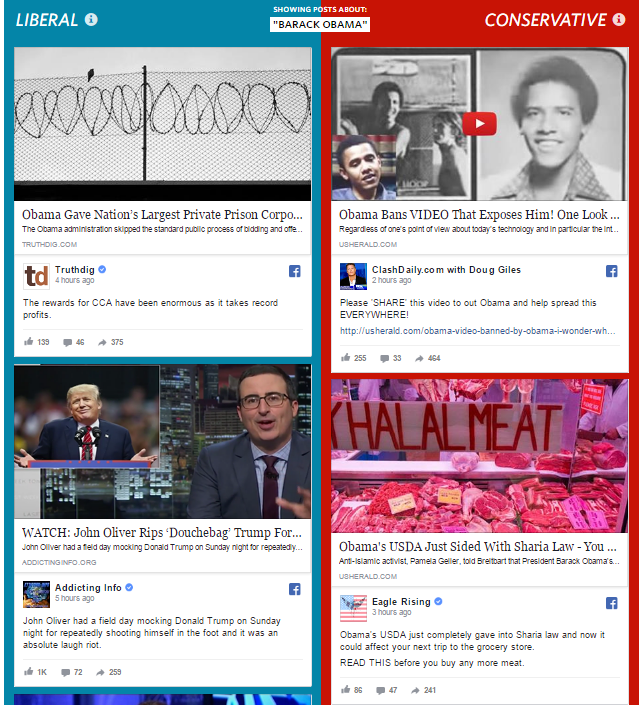 On the left you have a critical article about Obama’s light treatment of private prison corporations, but also a headline calling Donald Trump a “douchebag.” On the right you have a link to a video “banned by Obama himself” which purports to out him as an Islamist and a communist and a headline that says that Obama “gave into Sharia law.”

Liberal-leaning and conservative-leaning headlines and updates related to Donald Trump and Hillary Clinton read like this:

Conservative: “After Leading by 18 Points — Hillary’s Lead Over Trump Shrinks to Margin-of-Error”

Liberal: “Reagan’s Son Says His Dad Would be ‘Humiliated’ by Trump”

Conservative: “FBI Caves: Will Hand Over Notes from Clinton Interview”

Liberal: “Fox News is the Origin Story of Trump’s Bigotry”

You get the picture.

It’s interesting that the narrative of America being a united country is so widely promulgated by both liberal and conservative sides alike. If the politicians really want us to come together (and I doubt they do), the media isn’t helping. Granted, these are the extremes, but the sources on the side I oppose look like delusional conspiracy hubs to me, whereas I recognize many of the outlets on the side to which I lean. To me, those are “good” news sources, ones I count on. Presumably someone on the other side would feel the same about theirs and be equally horrified about mine.

The stories these different sources tell are not compatible. The “very liberal” and “very conservative” side are two wholly different worlds. It’s no wonder each side has such a difficult time understanding the other. I fear what it means about the future of our democracy.

I know you are probably trying to be "fair to both sides," but this is one of the problems with media reports on, well, the media: acting as if both sides are equally biased and that's the whole story. The liberal side may use charged words that support a liberal viewpoint, but I don't see actual lies in your examples. The conservative side DOES report lies as fact, such as "Hillary mobilizes illegal army" or "Obama bans video that exposes him." It's simply not the same on both sides: one side is biased AND reports untruths as fact. It is possible to say that without implying that the Left is utterly unbiased and objective.

You're aware the same is also true for gender issues, just a lot less reported?

Funny to go back. But "data modeling" as Donna Brazile put it, famously prepared urban media centers to celebrate their 2016 outcome and cried openly on live tv. They STILL don't believe it and STILL rely on their polling population to perpetuate their story. deTocqueville, Democracy in America said of the tyranny of the majority, "I know no country in which there is so little true independence of mind and freedom of discussion as in America." and he is more relevant than ever

Similar to the extraordinary measures taken to offset opioid epidemic, hiv epidemic, suicide epidemic among veterans...most administrations fail to take extraordinary steps to solve any issue. When they do take steps usually late and over the top.
A rare case of not listening to experts by Obama (What were his reasons?), but standard operating procedures under this to buyessay techniques.