English Acquisition Among Immigrants to the U.S.

Is it true that Spanish-speaking immigrants to the United States resist assimilation?

Not if you judge by language acquisition and compare them to earlier European immigrants. The sociologist Claude S. Fischer, at Made in America, offers this data: 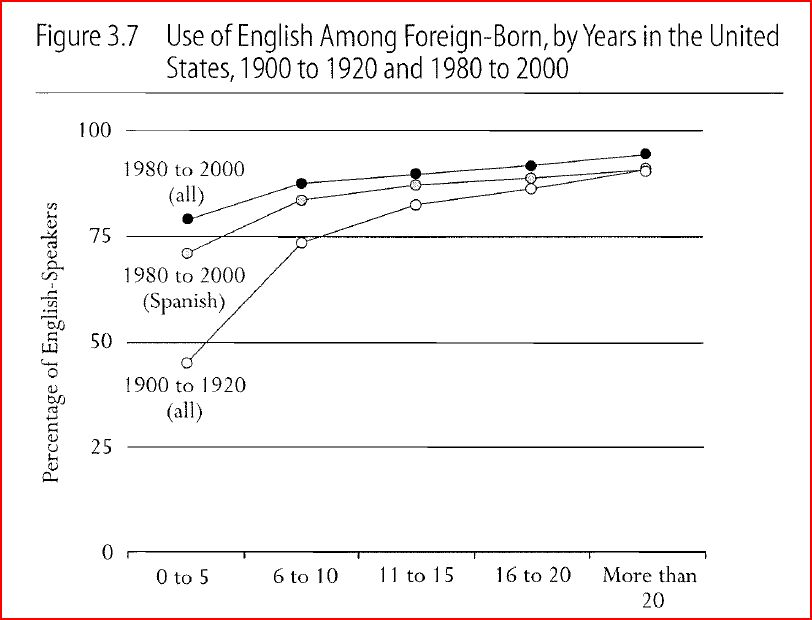 The bottom line represents the percentage of English-speakers among the wave of immigrants counted in the 1900, 1910, and 1920 census. It shows that less than half of those who had been in the country five years or less could speak English. This jumped to almost 75% by the time they were here six to ten years and the numbers keep rising slowly after that.

Fast forward 80 years. Immigrants counted in the 1980, 1990, and 2000 Census (the top line) outpaced earlier immigrants by more than 25 percentage points. Among those who have just arrived, almost as many can speak English as earlier immigrants who’d been here between 11 and 15 years.

If you look just at Spanish speakers (the middle line), you’ll see that the numbers are slightly lower than all recent immigrants, but still significantly better than the previous wave. Remember that some of the other immigrants are coming from English-speaking countries.

Fischer suggests that the ethnic enclave is one of the reasons that the wave of immigrants at the turn of the 20th century learned English more slowly:

When we think back to that earlier wave of immigration, we picture neighborhoods like Little Italy, Greektown, the Lower East Side, and Little Warsaw – neighborhoods where as late as 1940, immigrants could lead their lives speaking only the language of the old country.

Today, however, immigrants learn to speak with those outside of their own group more quickly, suggesting that all of the flag waving to the contrary is missing the big picture.

yup... seems like it wasn't until the introduction of national TV and a "mobile workforce" that America really became an English-speaking country throughout. Before that, different parts spoke different languages; not just the city neighborhoods, but also farming villages made up of only German immigrants, for example.

I think the perception that spanish-speaking immigrants are resistant to speaking English has a lot to do with the fact that people are bilingual- a lot of people have a tendency to think that if someone prefers to converse in spanish with their family, it must mean they can't or won't speak English, which isn't the case.

Thanks for posting this. This is a major misconception (maybe even an intentional misunderstanding) on the part of those pushing English-only legislation. It's not that immigrants don't want to learn English, it's that it's hard to learn a new language when you're past puberty, when you work all day, when you don't have the money or time for classes.

Something people fail to realize is that the children of immigrants are not in danger of never learning English. Children are at the optimal time to learn. Children often end up interpreting for their parents. So what is the real fear? English won't die out just because families are raising their children bilingual. Those children are going to have an advantage, but they aren't going to change the national language. What is the real fear? I bet it's not really about language at all.

Also, English is spoken & understood to a much larger (by orders of magnitude) degree in their native countries. So emigrants have an elementary grasp before they will have ever left.

Thanks so much; I'm definitely going to send people I know this graphic. An argument I run into a lot down here in Arizona is the assumption that Mexicans are just "lazy" because they refuse to learn English. My mother, for one, claims that she used to teach students whose parents had been here ten or so years and didn't speak anything but Spanish. She assumes, despite my statements to the contrary, that Mexicans are just lazy and stupid for not learning English.

I try to point out to her that the reason a lot of the parents of her children don't speak English is that she teaches in an extremely impoverished area, and about 70% of the neighborhood speaks Spanish as their first language. I doubt there is any access to night school or English-learning facilities, and the parents typically work far too much (for far too little) to waste time learning English anyways. I also doubt that those families had been there for long. Many of the children she taught weren't even American citizens. Even with the ones that were, their parents might not have been. Every Christmas, at least five children would just disappear, never to be seen again. I assume that they went back over the border for the holidays, and had trouble returning.

The point is, that loads of immigrants in my area come from economically depressed backgrounds, and some might not even be literate in Spanish. They have little incentive to learn English, and little support to do so. The time spent learning English is probably better spent making money to send back to relatives in Mexico, or to eek out an extremely subpar living in a bad neighborhood in America.

Immigrants from Europe and elsewhere are often wealthy. Even political refugees have support systems and programs that help become bilingual quickly. I'd guess that more of them are students as well, which raises the chance that they already know some English, or have the economic means to teach themselves quickly.

Even with the lack of support, Mexican and South American immigrants teach themselves English faster than European immigrants did at the turn of the century, even though many Spanish-speaking immigrants live in areas where English is not strictly necessary.

I'm pretty impressed that the turn-around is that fast for immigrants. I'm in the process of learning a second language, and I'm absolutely horrible at it. I also have loads of free time, access to expensive university classes, and the means to seek private help if I so pleased. It's been 4 years, and I'm barely passing as semi-fluent. In other words, I'd have to be a massive hypocrite to expect immigrants to do what I have trouble doing myself, especially since most of the Mexican immigrants in my area don't have anywhere near the access I do to the means to teach themselves.

[...] from the blog Sociological Images: The bottom line [of the above figure] represents the percentage of English-speakers among the wave [...]

To chime in with a lot of other comments, racist people oftentimes use an immigrant's trouble with English as an excuse to be spread their xenophobia. I see this a lot with body-shaming and slut-shaming, too...some fat kid is mean, so the haters call him a "fat jerk" because they finally found justification for ragging on the kid's weight, or an unpleasant promiscuous woman gets labeled a "nasty slut" or something, when her nasty personality has nothing to do with her sexual choices. It's also when, say, someone disagrees with a female politician's stance on war, and thinks it's okay to call her a ball-busting bitch because of that.

That said, whenever some racist douchebag is complaining because her waitress had trouble understanding her order, all I can say is, "How many languages do YOU speak? That waitress is at least semi-bilingual, which makes her a better linguist than your elitist ass."

My great-grandparents on my dad's side of the family all emigrated from Italy in the early 1900s. They were one of the groups that nativists at the time thought were going to ruin America. I know for a fact that at least one of my great-grandmothers never learned English. It's always bummed me out that my grandparents never taught Italian to my dad's generation, so they could not converse with at least that one grandmother.

Anyway, one of my uncles is a conservative anti-immigration type, and complains about how recent immigrants refuse to learn English etc. When his own grandmother never learned English.

Anyways, I don't think we have nearly the sorts of language diversity that this country once had - there used to be newspapers in Yiddish, Lithuanian, etc., which don't exist anymore. I think folks are assimilating now more than they did back in the day, and that's not necessarily a good thing. I think it is a good thing that more folks are bilingual. I hope that the bilingual kids of immigrants will raise their kids to be bilingual too.

Hardly a suprise to me since all my Hispanic immigrant friends communicate with me in English -- the only language I learned in 20 years of formal education in the U.S. Sad how the educational establishment labels bilingual immigrant students as "English Language Learners." That applies equally to me, moi, mi. Even sadder that the U.S. is the only "developed" country on earth that has as its language education goal universal literacy in ONE language. Elsewhere, students learn two, three, or more languages in school! Language = communication = not just global competition, but also collaboration to save the planet and the people on it! Obama said all children should be bilingual or trilingual when running for the Presidency; Education Secretary Duncan didn't read or heed the candidate's promise. Maybe HE doesn't understand English.

[...] Wade has a good chart which shows that contrary to perception, today’s immigrants are somewhat more English-capable [...]

A wide variety of personal experience in time, situation and location points to this points to this being false.
In Southern California, Denver and Texas the percentage of Mexican immigrants that speak english well or frequently approaches nil. I am married into a large Mexican family and other than my wife none of them speak or wish to speak more than rudimentary english. The study say that they know and "use" english. I suspect they "use" english much like I use my restaurant French

Actually, that chart PROVES exactly the opposite of what the authors think. First comparing English acquisition in the early 1900s, before TV, before even widespread radio, to English acquisition today, is irrelevant. What is relevant is the comparison between 1980 to 2000 for both groups (All and Spanish). When you plot the number who have acquired English, the two groups look pretty similar, but plot the complement, the people who have not acquired English. Then you will see that the Spanish speakers lag behind "all" by about 40%. There is no way you can attribute all of that to "immigrants from English speaking countries".

What this country needs to do is stop all teaching of Spanish to students in public schools and, instead, devote our bilingual resources to teaching English to native Spanish immigrants.

learning english is quite easy, there arem any tutorials on the internet and some audiobooks too `~;

Nice comments ! I was enlightened by the facts , Does someone know where
I can get ahold of a blank Calendar document to fill out ?