U.S. women of color have historically been the victims of forced sterilization.  Sometimes women were sterilized during Cesarean sections and never told; others were threatened with termination of welfare benefits or denial of medical care if they didn’t “consent” to the procedure; teaching hospitals would sometimes perform unnecessary hysterectomies on poor women of color as practice for their medical residents.  In the south it was such a widespread practice that it had a euphemism: a “Mississippi appendectomy.”

Interestingly, today populations that were subject to this abuse have high rates of voluntary sterilization.  A recent report by the Urban Indian Health Institute included data showing that, compared to non-Hispanic white women (in gray), American Indian and Alaskan Native women (in cream) have very high rates of sterilization: 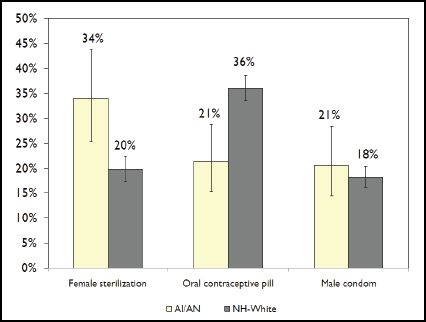 Iris Lopez, in an article titled “Agency and Constraint,” writes about what she discovered when she asked Puerto Rican women in New York City why they choose to undergo sterilization.

During the U.S. colonization of Puerto Rico, over 1/3rd of all women were sterilized.  And, today, still, Puerto Rican women in both Puerto Rico and the U.S. have “one of the highest documented rates of sterilization in the world.”  Two-thirds of these women are sterilized before the age of 30.

Lopez finds that 44% of the women would not have chosen the surgery if their economic conditions were better.  They wanted, but simply could not afford more children.

They also talked about the conditions in which they lived and explained that they didn’t want to bring children into that world.  They:

…talked about the burglaries, the lack of hot water in the winter and the dilapidated environment in which they live. Additionally, mothers are constantly worried about the adverse effect that the environment might have on their children. Their neighborhoods are poor with high rates of visible crime and substance abuse. Often women claimed that they were sterilized because they could not tolerate having children in such an adverse environment…

Many were unaware of other contraceptive options.  Few reported that their health care providers talked to them about birth control. So, many of them felt that sterilization was the only feasible “choice.”

Lopez argues that, by contrasting the choice to become sterilized with the idea of forced sterilization, we overlook the fact that choices are primed by larger institutional structures and ideological messages.  Reproductive freedom not only requires the ability to choose from a set of safe, effective convenient and affordable methods of birth control developed for men and women, but also a context of equitable social, political and economic conditions that allows women to decide whether or not to have children, how many, and when.

Originally posted in 2010. Cross-posted at Ms.

This is really sad. I've not made the choice to have kids and I strongly support the choice not to have kids, but I believe that it should be a choice and not something people are forced into either way.

Not to downplay it, but rather to highlight even more the contrast, it seems to be very difficult for white women to get sterilized in the U.S. when they WANT to be. A friend of mine with a history of cervical cancer and mental disease and absolutely no desire to have kids wanted to be sterilized but couldn't find a doctor who would do it because she was in her 20s and didn't already have children. She now has a child and I know it's rough for her, but she doesn't believe in abortion and didn't want to give up her baby so she's doing the best she can. I've heard other white women asking around, trying to find someone who'd be sympathetic to their choice to be childfree. I haven't even been able to find a gyn that would use a method like IUDs on me because I haven't had children.

Finally, my husband got a vasectomy since the repeated costs and side effects of hormonal birth control for me just weren't worth it seeing how neither one of us wants children and especially biological children. And yes, there seems to be a double standard, too, where guys can get sterilized without a problem. In our experience, even talk about the guy perhaps changing his mind is "Well, what if your wife wants to have kids some day?" or "What if you meet someone later that wants kids?

And yeah, there's no doubt about it to me that there is racism and sexism involved. I've heard plenty about how it's a (white) woman's job to be a mother and even talk about how it's this big competition between cultures/races, how non-whites are "out-breeding" whites and we'll lose America to other cultures (i.e. non-WASP) and then it won't be really America anymore. Those certainly aren't my values, to be clear but, where I'm from, racism (etc.) isn't something that everyone even cares to hide.

That's a way lower condom usage rate, for both NH-white women and AI/AN women, that I would have expected...

I support desired sterilization -- and it needs some support: for me (as a young woman) it was expensive, not covered by insurance, and bloody hard to find a doctor who was willing to perform the surgery. (As it was, my doctor tried to back out at the last minute. I had to talk him into it as I went under.) Almost everyone I mention it to believes that I was coerced into sterilization in one way or another.

But say "I support sterilization" and you'll quickly get a reputation as a *shudder* eugenicist. Sterilization has an unsavory past, and as you so rightly point out in this post, its present isn't so wonderful either.

All of which is a lengthy way of saying that I am heartily in favor of more analysis (and amelioration) of the factors that lead to 'necessary' sterilization, if only so I can fully support sterilization that is truly desired.

I've also been hearing a lot about community health clinics, or places like them, pushing depo-provera on teenaged girls who come in for checkups here in Philadelphia. My white girlfriend works in adult education, and her clients are mostly very poor people of color. She found out about the very existence of depo from conversations with them, and everyone she's talked to about it apparently knows about it / know someone who's had it.

It's telling that a 3 month birth control shot with severe side effects for some women was never even presented to my middle class white girlfriend, but is apparently the default option clinic workers are offering poor non-white girls here in Philly.

When I went to my doctor for birth control (I'm black) I was told "you don't want depo-provera, that's for drunken bar girls who can't remember to take the pill."

TWO-THIRDS of Puerto Rican women in US and PR are sterilized by the age of 30?!?!

we have white women to thank for this.

Ugh! How horrible. Seems really strange that the effects of this are probably still present today.

It seems really weird to me that they get sterilised at all, as, the way I've been taugh,t you should never perform sterilisation upon women unless she really, really wants it or has another indication for say hysterectomy. Seriously, the mirena coil has much lower rates of pregnancy than tubal ligation (somewhere between 1 in 500 and 1 in 1000 compared to 1 in 200) and is way safer as it doesn't involve attendant the risks of a general anaesthetic or abdominal surgery. And it is immediately reversible (I know most women don't change their mind, but some do and it is nice for those women still to have options). I think women are really underinformed about the LARCs in general, they really need to market them more.

For those who are interested in knowing more about the structural inequities that lead to these sterilization rates, Andrea Smith discusses it at some length in Conquest: Sexual Violence and American Indian Genocide.

[...] Breaking Down the Force/Choice Binary In the Sterilization Of Women Of Color During the U.S. colonization of Puerto Rico, over 1/3rd of all women were sterilized.  And, today, still, Puerto Rican women in both Puerto Rico and the U.S. have “one of the highest documented rates of sterilization in the world.”  Two-thirds of these women are sterilized before the age of 30. Lopez finds that 44% of the women would not have chosen the surgery if their economic conditions were better.  They wanted, but simply could not afford more children. (tags: via:carleandria sterilization forcedsterilization women'shealth womenofcolour reproductivejustice) [...]

[...] Breaking Down the Force/Choice Binary in the Sterilization of Women of Color » Sociological Images Reproductive freedom not only requires the ability to choose from a set of safe, effective convenient and affordable methods of birth control developed for men and women, but also a context of equitable social, political and economic conditions that allows women to decide whether or not to have children, how many, and when. (tags: reproductive.rights race latin@s indigenous.peoples usa) [...]

Here is a very good documentary explaining the begining of the situation with force sterilization in puerto rico.......im a puertorrican, and would like to see more discusion in this great forum of 'sociological images' about our socio-economical situation with the continental USA, and above all, on how their people perceive us.

I have traveled most of the continental territory as a backpacker (in that way a have learned english "sorry is not perfect"); and a great mayority of americans with who i talked with, do not know the fact that P.R. and its people are part of USA, the policies that bind us together and other related stuff that directly and clearly shape our identities...

I assure you there is a lot to talk about this in this forum!

Here is the link for that documentary on force sterilization