One explanation for Trump’s popularity on the political right is that supporters are attracted to him because they feel invisible to “establishment” candidates and Trump, as an “outsider” is going to “shake things up.” A survey of 3,037 Americans completed by RAND, weighted to match the US (citizen) population, suggests that there is something to this.

About six months ago, RAND asked respondents if they agreed with the statement “people like me don’t have any say about what the government does.” Responses among likely Democratic voters didn’t significantly correlate with support for either Sanders or Clinton and those among likely Republican voters didn’t significantly correlate with support for Rubio or Cruz, but responses did correlate dramatically with a preference for Trump. All other things being equal, people who “somewhat” or “strongly” agreed with the statement were 86% more likely to prefer Trump over other candidates. 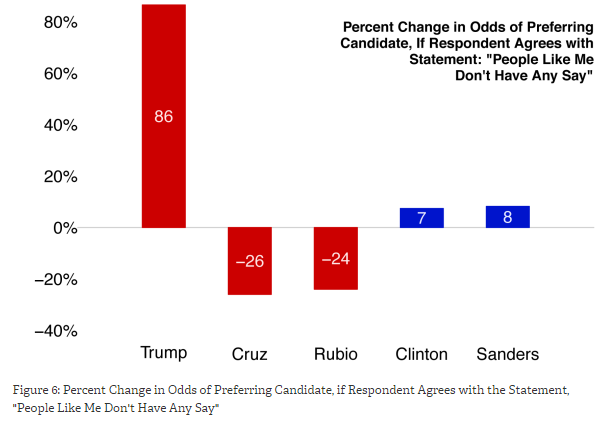 Whatever else is driving Trump voters, a sense of disenfranchisement appears to be a powerful motivator.

" RAND asked respondents if they agreed with the statement “people like me don’t have any say about what the government does.” "

You might call that "political disenfranchisement" or "feel(ing) invisible to "establishment" candidates." I'm sure that's what they tell themselves too. But we know that when we scratch the surface, what's underneath is actually a toxic stew of racial resentment and aggrieved entitlement.

It's dangerous to put that innocuous spin on what are odious beliefs. Calling it feeling invisible or a sense of disenfranchisement encourages us to feel sympathy for people who have had the biggest pieces of pie and are angry that they're now expected to make do with the same as everyone else, and to validate those feelings, like maybe they have a point and we should cater to them a bit more. They do not and we should not.

I'd bet ISIS supporters also felt they had no say. What about those voting for Brexit? Who thinks they have a say over corporate governance if they own stock through mutual funds or even directly? Alienation might explain a lot of behaviors that wouldn't otherwise be explained by self-interest.