Will the Democrat Sit In for Gun Control Work? A Measured Consideration

Democratic members of the US House of Representatives sat in on the floor of the House, demanding recorded votes on gun control measures. Rep. John Lewis (Georgia) made the speech that launched the effort, and was framed at the center of most of the photos; after all, he has an unrivaled record for participating in such efforts that dates back to the sit-in movement of 1960. 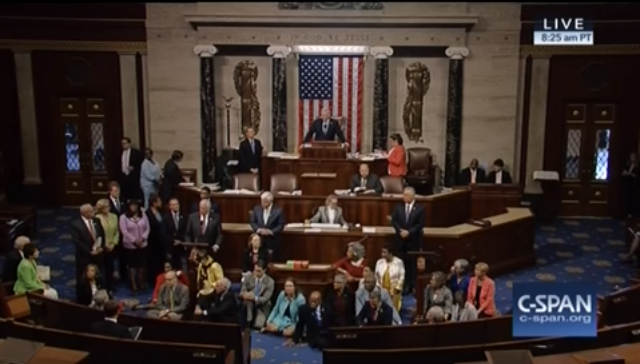 They’re grandstanding, hoping to the play to the crowd by violating the norms and rules of the House where, under normal circumstances, a member of the minority party can’t do much on matters of policy. Appealing to the public is their best shot to get a vote, but it’s not a very good one; and it’s extremely unlikely that anything gun control advocates in the House want could win majority support in that body. The members sat on the floor in the well of the House, likely the most comfortable surface Rep. Lewis has ever protested on, without much fear of arrest or violence. The presiding officer, always from the majority party, adjourned the session, turning off CSPAN’s cameras – seeking to deny Democrats the audience they seek. But the protesters are livestreaming on a variety of social media. It’s not quite so easy to control the flow of images and information anymore.

The Democratic revolt in the House is yet another response to the mass shooting in Orlando, which once again reminded Americans – and their representatives – that it’s very easy for dangerous people you don’t like to get powerful weapons. The sit-in is also an attempt to escalate the political conflict and make more of the generally fleeting moment of public attention that follows such a tragedy. We’ve all seen it many times before: a mass shooting captures public attention and sets the agenda, but only briefly, and a familiar political ritual plays out: Advocates of gun control hold vigils and make speeches; advocates of gun rights mostly stay silent on matters of policy, and offer thoughts and prayers for the victims and their families. And the moment passes.

In normal political life, when  everyone isn’t talking about guns all the time, the gun rights side of the debate enjoys a substantial advantage, particularly visible in the National Rifle Association, which deploys more money, more active membership, and calls upon more well-positioned allies than its opponents, who come and  go. Gun control advocates have been “outgunned, outmanned, outnumbered, outplanned” (to quote Hamilton).

Since the tragic massacre of school children in Newtown, Connecticut, gun control advocates have been building organizations and  an infrastructure for action. They have been better able to exploit the moment of a massacre, and less willing to allow their opponents to stall until concern passes.

Last week, Senator Chris Murphy, who previously represented Newtown in the House, staged a filibuster of sorts in the Senate, monopolizing the floor while standing, not sitting, and talking about the need for action. In the upper house, a Senator can hold the floor as long as he can stand and talk. Most Democrats, and a couple of Republicans, joined Senator Murphy for part of 15 hours, offering sympathetic questions and taking up some of the talking. The leadership agreed to hold votes on four gun control bills, and Murphy stopped talking. The next day, the Senate rejected all of them.

Movement on policy? Not so much, and not so fast, but all of this sets up further contest in the November elections.

Meanwhile, other advocates are prospecting another strategy that operates with different rules and on an alternative schedule. Parents of some of the massacred students at Sandy Hook Elementary School have filed a product liability suit against Remington Arms, the company the  manufactures and markets the AR-15 Bushmaster, the weapon used in the mass murder. (See Evan Osnos’s report at The New Yorker.) By pursuing their argument about deceptive marketing, they hope to publicize the workings of the arms industry, contributing to a political debate that’s only slowly emerging. America offers many outlets for people to try to organize for change, none of them very easy or fast.

Nothing gun control advocates have tried has affected national policy for more than twenty years. As public concern and political resources grow, however, they keep trying to innovate new approaches, hoping that something works before the next time.

David S. Meyer, PhD, is a professor of sociology and political science at the University of California, Irvine. He blogs at Politics Outdoors, where this post originally appeared, and where he offers comments on contemporary events informed by history and the study of social movements.