The Intersectionality of Hate: Violence Against LGBTQ People of Color

“It was ‘Latino night’ at a gay club,” Salvador Vidal-Ortiz wrote. As a sociologist who identifies as a queer Latino man, the intersection of race, gender, and sexual orientation itself was the central story of the Orlando massacre, even as liberal media pundits seemed to fixate on sexual orientation and conservative ones on the identity of the shooter.

In fact, research suggests that racial minorities are far more likely to be victims of anti-LGBTQ hate crimes than whites.

The National Coalition of Anti-Violence Program collected data on hate crimes against LGBTQ and HIV-affected people (and those perceived to be so). The 1,253 incidents were self-reports collected by local chapters in 12 states. The data isn’t national or representative, so their results should be considered tentative and exploratory and, for what it’s worth, it’s difficult to get good data on hate crimes, so there isn’t a perfect data set out there.

Still, if their data is anywhere close to accurate, the findings suggest that race and citizenship status are central to even an elementary understanding of hate crimes against (perceived) sexual minorities.

The NCAVP allowed the 752 survivors of color to choose more than one race for a total of 931 racial categories. The chart below features the responses (excluding white when white was mentioned alongside a non-white racial category). Latino/a was the racial identity most frequently reported, followed by Black or African American. These two groups made up the vast majority of victims. 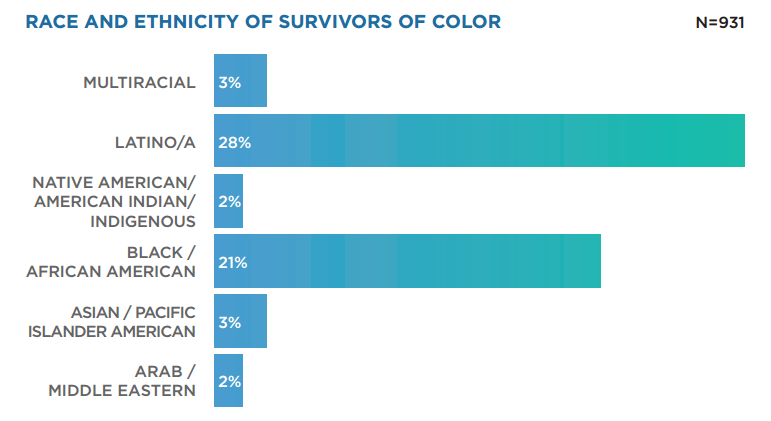 Black and Latino/a Americans are the largest racial minorities in the US (at 13% and 17% respectively), which may account for much of the disparity among non-white victims, but probably not all. It’s hard to parse the disproportionality because survivors could choose more than one race. The under-representation of Asians is likely real because being able to choose multiple races would err on the side of over-representation. The federal government considers people who are Arab or Middle Eastern to be White, but that doesn’t throw off the numbers that much.

These statistics, as I said, are likely quantitatively imperfect, but they are likely not qualitatively wrong. Thanks to some combination of discrimination and structural vulnerability, people of color are more likely to be victims of anti-LGBTQ and HIV-status violence. “It was ‘Latino night’ at a gay club.” It matters.

FYI for naive readers: the author failed to include Table 2, which does not fit the prevailing narrative of racial victimization. Blacks and Hispanics are over-represented as *offenders* in this study, constituting 28 and 22 percent of the offenders, respectively. Whites (and 'Asians') are under-represented. Blacks are over-represented as offenders in hate crimes generally (see https://www.fbi.gov/about-us/cjis/ucr/hate-crime/2014/topic-pages/offenders_final ), as well as other (non-hate?) crimes such as rape (>30%), assault (>30%), robbery (> 55%) and homicide (~48%). These arrest data (e.g. the FBI's Uniform Crime Reports) are corroborated by the National Crime Victimization Survey (NCVS), i.e. by what the victims themselves say. Statistically speaking, 'persons of whiteness' are in fact disproportionately victims in inter-racial violence: out of the roughly 660,000 crimes that occurred between a white and a black in 2013, for example, blacks were perpetrators *85%* of the time.