Last month the Washington Post released the results of a poll of self-identified Native Americans. It asked respondents whether they found the Washington Redsk*ns mascot offensive and 90% responded that they did not.

Dr. Adrienne Keene responded at Native Appropriations, where she has been blogging about Native issues, and the mascot issue, for years. She questioned the methods and her discussion is worth a read. It’s both a great example of uninformed/biased polling and an introduction to the politics of Native identity and citizenship.

She also questioned the logic behind doing the survey at all and that’s what I’d like to talk about here. “I just don’t understand why WaPo felt the need to do this poll,” Keene wrote. “We’ve got psychological studies, tribal council votes, thousands of Native voices, and common decency and respect on our side, yet that was not enough.” What is there left to understand?

“This is just an investment in white supremacy, plain and simple,” she concluded.

It’s hard to parse motivations, especially institutional ones, but it’s arguable that the effect of the poll was to shore up white supremacy by undermining decades of Native activism against the mascot, validating white people’s defense of it, and weakening challenges.

The owner of the Redsk*ins, Daniel Snyder, who strongly defends the use of the term, immediately pounced on the poll, writing in a statement:

The Washington Redskins team, our fans and community have always believed our name represents honor, respect and pride. Today’s Washington Post polling shows Native Americans agree. We are gratified by this overwhelming support from the Native American community, and the team will proudly carry the Redskins name.

By mid-afternoon the day the poll was released, Keene noted that there were already over 100 articles written about it, alongside repeated images of the Redsk*ns logo, an anachronistic depiction of an Indian wearing braids and feathers that portrays Native people as historical instead of contemporary. 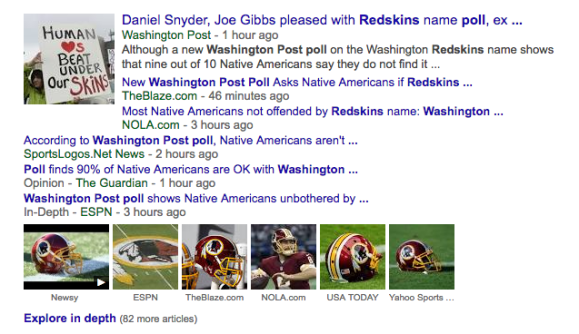 And the poll very well might be used in the ongoing court battle over whether the Redsk*ns trademark can be pulled (federal law does not allow for trademarking racial slurs, so the fight is over whether the word is a slur or not).

Keene asks, “Who does this serve?”

It’s a good question, but questioning the motivation for the poll is just part of a larger and even more absurd question that anti-Redsk*ns activists are forced to ask: “Why is this even a fight?”

“We just want respect as human beings,” Keene implores. It would be easy to change the name. Quite easy. It just takes a decision to do it. Not even a democratic one. It wouldn’t even be particularly expensive. And fans would get over it. Why is it necessary to keep the name? Who does it serve? There is no doubt that the word redsk*ns is arguably offensive. Many Natives are and have been saying so. Why isn’t that enough? The fact that Snyder and other supporters defend the name so vociferously — the fact that this is even a conversation — is white supremacy, “plain and simple,” too.