25% of Wives Earn More than Their Spouses, But We Probably Shouldn’t Call Them “Breadwinners”

Nowadays, women are much more likely to earn more income than their spouse than they used to. But this is a shift, not a revolution, because very very few women are the kind of breadwinner that some men used to be.

Using data on 18-64 year-old married wives and their spouses (95.5% of which were men) from Decennial Censuses and the 2014 American Community Survey, here are some facts from 2014: 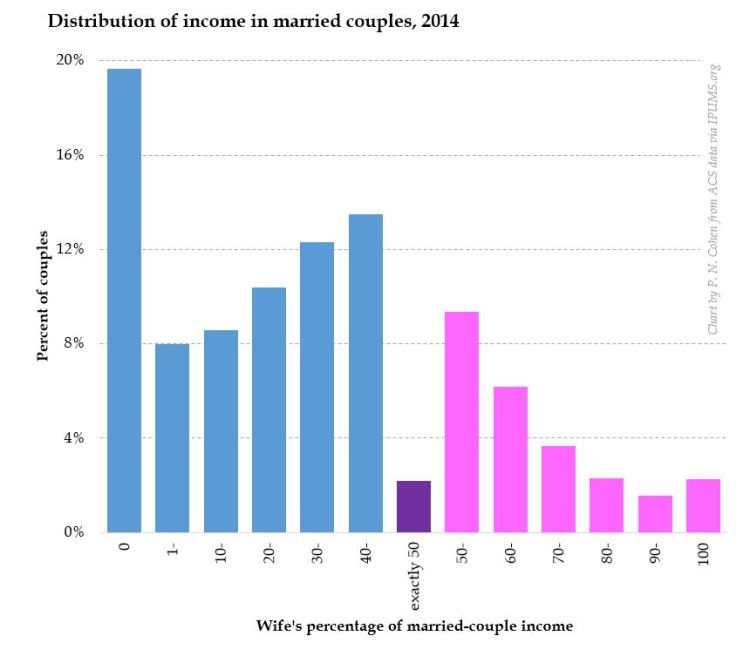 Male and female breadwinners are not equivalent; making $.01 more than your spouse doesn’t make you a 1950s breadwinner, or the “primary earner” of the family.

Philip N. Cohen is a professor of sociology at the University of Maryland, College Park, and writes the blog Family Inequality, where this post originally appeared. You can follow him on Twitter or Facebook.

Interesting, however this data could just represent that women who contribute more equally to their households (whether it's slightly more or less) may tend to choose more equal partners, whereas women who tend to earn much less may tend towards choosing husbands with much greater inequality.