Clinton Has Received the Most Negative, Least Positive News Coverage

Vox released the following figure this month, illustrating the results of an analysis by social media analytics company Crimson Hexagon. Excluding neutral stories, it shows the percentage of positive and negative media coverage for the final five candidates in the presidential primary. Clinton has received the most negative coverage and the least positive coverage. 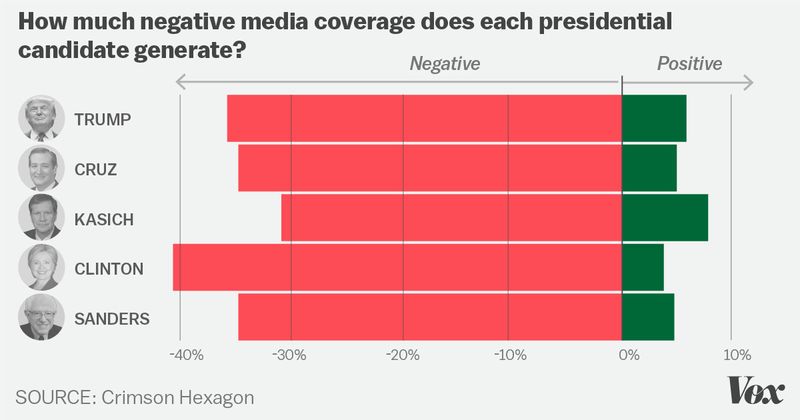 As Jeff Stein at Vox notes, there may be more negative scrutiny of Clinton compared to Sanders because she’s widely considered to be the front-runner and that might not be good for Sanders, despite the greater positive coverage, because it could mark him as a non-contender.

Being the front-runner, though, doesn’t explain why Trump has received comparably less negative and more positive coverage.

Are these numbers reliable?

Well, the numbers were generated by algorithm. First Crimson Hexagon picked news outlets to include in their analysis. They did so by choosing the outlets that generated the most conversation on social media: Washington Post, Politico, Fox News, the Huffington Post, and CNN. So, one caveat is: if you’re using social media to get your news, you’re probably getting more negative coverage of Clinton compared to the other candidates. If you’re not, you may be exposed to a different balance of stories.

Next, they ran over 170,000 posts from these outlets through an “auto-sentiment” tool. It’s a computer program they built by hiring staff to manually code and enter hundreds of thousands of stories into a database as examples. The computer then searches for patterns between the positive, negative, and neutral stories and compares those patterns with un-coded stories that it sorts, anew, into those three categories.

One thing you might find easy to swallow though, even if you’re a skeptic, is how little positive news there is about anybody.