When Did It Become Allowable to be Pregnant in Public?

Pregnancy wasn’t always something women did in public. In her new book, Pregnant with the Stars, Renée Ann Cramer puts public pregnancies under the sociological microscope, but she notes that it is only recently that being publicly pregnant became socially acceptable. Even as recently as the 1950s, pregnancy was supposed to be a private matter, hidden behind closed doors. That big round belly was, she argues, “an indicator that sex had taken place, [which] was simply considered too risqué for polite company.”

Lucille Ball was the first person on television to acknowledge a pregnancy, real or fictional. It was 1952, but it was considered lewd to actually say the word “pregnant,” so the episode used euphemisms like “blessed event” or simply referred to having a baby or becoming a father.

Almost 20 years later, in 1970, a junior high school teacher was forced out of the classroom in her third trimester on the argument that her visible pregnancy would, as Cramer puts it, “alternately disgust, concern, fascinate, and embarrass her students.” So, when Demi Moore posed naked and pregnant on the cover of Vanity Fair just 21 years after that, it was a truly groundbreaking thing to do. 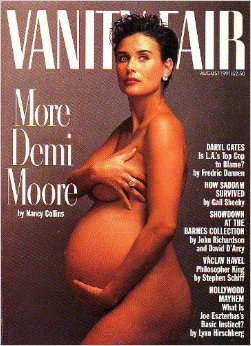 Today being pregnant is public is unremarkable. Visibly pregnant women are free to run errands, go to restaurants, attend events, even dress up their “baby bump” to try to (make it) look cute. All of this is part of the entrance of women into the public sphere more generally and the pressing of men to accept female bodies in those spaces. The next frontier may be breast feeding, an activity related to female-embodied parenting that many still want to relegate to behind closed doors. We may look back in 20 years and be as surprised by intolerance of breastfeeding as we are today over the idea that pregnant women weren’t supposed to leave the house. Time will tell.

My grandmother (born in the 1910s,) could never bring herself to say the word "pregnant." It was always, "expecting." And, think of the difference in maternity clothing styles between even the 1980s and today. My mother's generation had everything big and baggy and flowing, whereas today, maternity clothing is very form fitting.

I'm 26 years old and the youngest of eight children born to parents who didn't use birth control because of religious objections. I was raised in a hyper-conservative Christian denomination that exists mostly in rural pockets throughout the midwest. My mom told me a story about my grandmother a few years ago that unintentionally revealed this phenomenon of pregnancy-shaming to me. My mom became pregnant with my oldest sibling in the early 1970's, and was late in her second trimester when she and my dad were baptized together in front of their church. Because of their water submersion method of baptism, Mom's baggy maternity clothing could no longer hide her clear baby bump as she exited the baptismal tub. She told me about her embarrassment as other women snickered and talked behind her back about her now-obvious pregnancy, and how my dad's mom had shown love and bravery by openly marching up and sliding in next to my mom on an otherwise empty church pew. Grandma put her arm around Mom and assured her that "God has a plan in all of this". Mom told me this story in a very matter-of-fact way as if I would naturally understand why she would hide her pregnancy for so long and why it would be so embarrassing to have her pregnancy revealed to the church community. I had known of my parents' ultra conservative sexual mores, but had no concept of this type of approach to pregnancy before Mom shared this story with me.